I’m sad to say that Mythic Legions Wednesdays are drawing to a close. Today I’m embarking on a look at the first of the final three figures that I have left from my initial Kickstarter Backer add ons. I’ve opted to go with the Bronze Dwarf Legion Builder, only because it’s been a while since I last looked at any of the Dwarves in this line. So let’s not delay. Time is short… and so is this figure! That’s a little Dwarf humor! 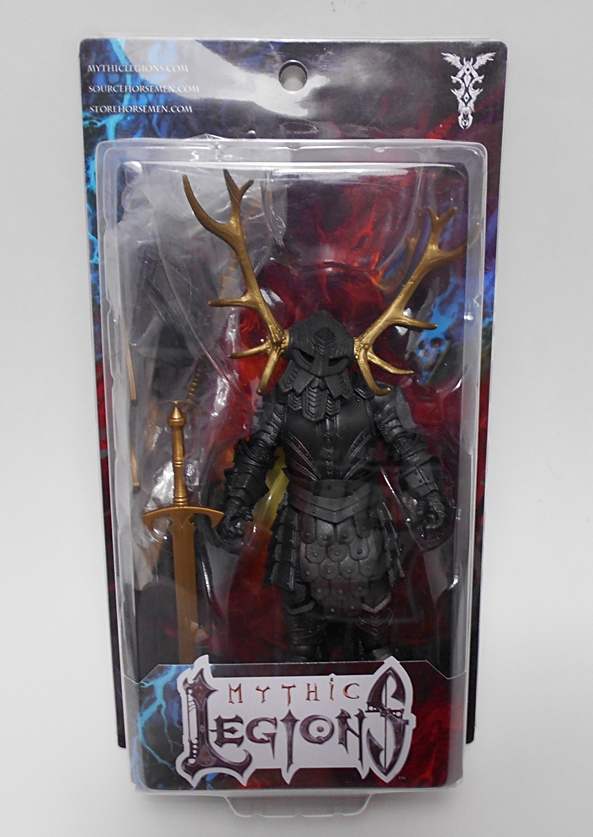 The Legion Builders are the less expensive figures in this line and are generally designed for either troop building or customization. I only picked up three of the Legion Builders, with the first two being the Gold and Silver Knights. The packaging is still identical to the regular releases. The figure comes on a collector friendly card and bubble and there’s a little bio blurb printed on the bubble insert.

One of Mythic Legions’ best accomplishments has been the ability to mix and match parts from their catalog to create fresh and new figures. In the case of this guy, however, the fully armored body is a straight reuse from the previous two Dwarves I looked at, right down to the upturned toes in their boots. As a Legion Builder, there’s very little here in the way of paint operations. The armor is all a very deep and rich bronze with a slight glittery finish. Thankfully, these beautiful and detailed sculpts still hold up well without the extra paint. 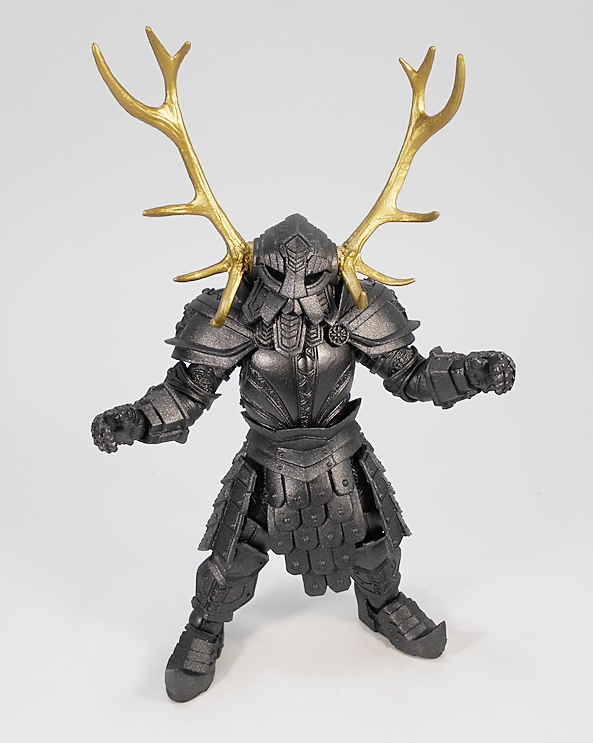 The figure includes a pair of shoulder armor, which peg into the back. These are the same pieces included with Bothar Shadowhorn and here they’re painted to match the rest of the armor. They also offer a quick and easy way to customize the figures, if you happened to pick up a few of these guys to populate your Dwarf army. Put one on, put them both on, leave them both off, it’s nice to have options! I still say T4H or someone out there needs to produce a chunk of plastic to plug up that rectangular slot in the backs of these figures. And if they put a peg socket on it, the figures could wear their shields on their backs. That would be awesome!

The head is the only new piece of sculpting here, and by that I mean it’s the first time I’m seeing it, but it was used for a couple of other Dwarves in the line. It’s a fully enclosed helmet with a very distinctive Norse style and plates designed to resemble a sort of stylized beard. Or at least that’s how I see it. The helmet includes a large set of antlers, which are the same pieces we saw back at the beginning with Gorgo Aetherblade. These are painted in a rather nice shade of gold and offer the only real diversity in the coloring on the figure. Either way, this helmet makes him look like a total badass. While this fellow is indeed a Dwarf, he still offers all the same articulation as the larger figures as well as the same modular design that allows you to break the figure down at the joints. Indeed, from the waist up, the Dwarves use the same parts as the other figures and only the legs are shortened. 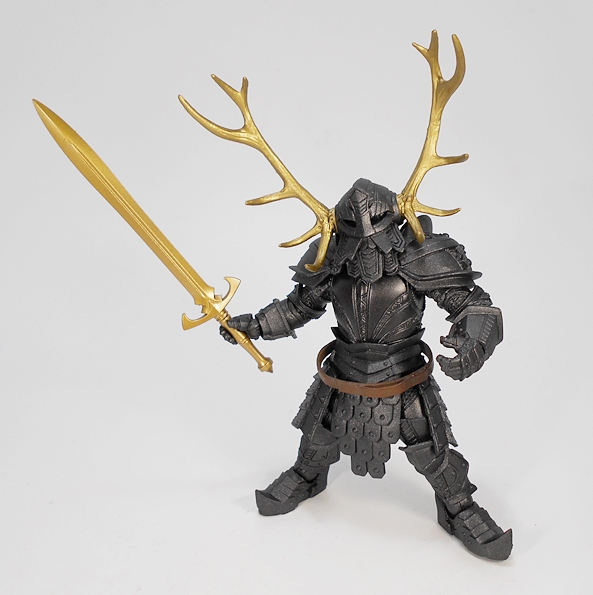 The Bronze Dwarf comes with the usual array of weapons that we’ve seen before, this time all just painted gold. I’m still not sure how I feel about the all gold weapons. On the one hand, they don’t seem appropriate for a rank-and-file Legion Builder, but I think the point is that you can customize them yourselves. On the other hand, these make for some pretty cool treasure pieces. or magic weapons, or something like that if I ever get around to setting up a diorama or proper display for these guys. Anyway, the sword is the longer, double-handed one and includes the brown belt so he can wear it on his hip or across his back. 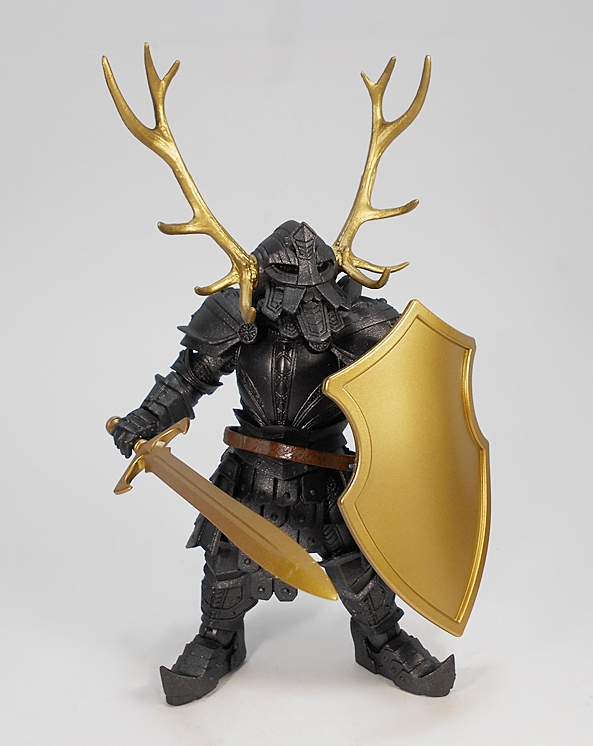 The shield is left blank on the front, allowing people with painting skills (people other than me) the ability to put their own crest on it. 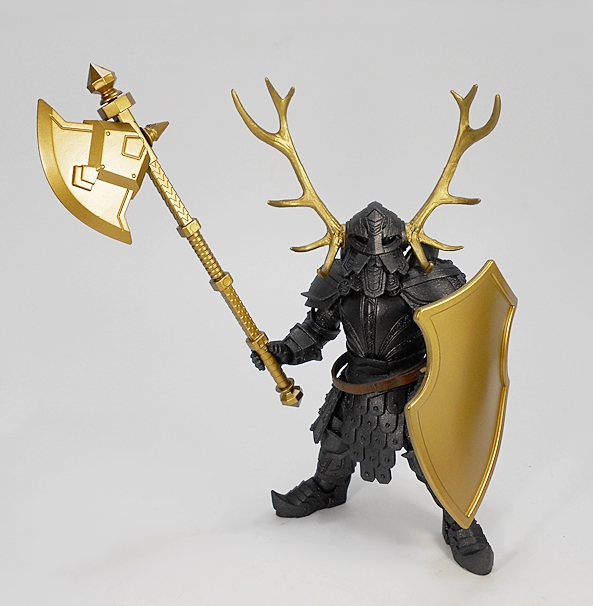 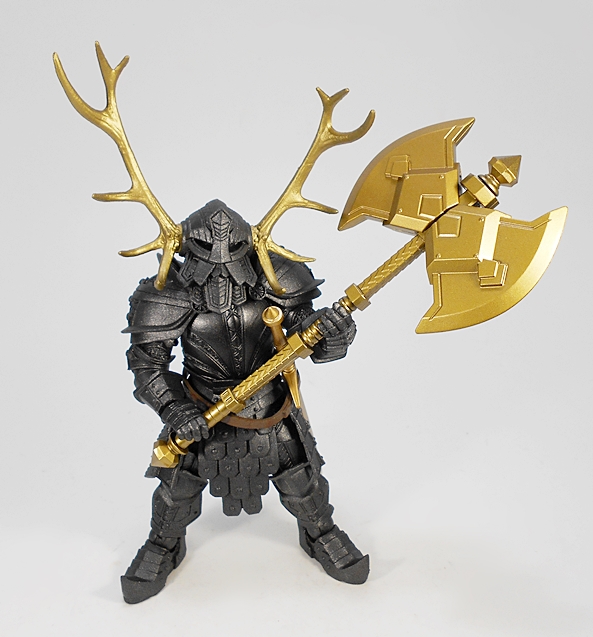 And finally the ubiquitous axe, which can be converted to either a single or double bladed weapon. Even though these are the larger weapons and designed for the full sized figures, they still work surprisingly well with the Dwarves. Still, it would have been cool if we got some smaller scaled Dwarf weapons also.

The regular Mythic Legions figures were $33 as Kickstarter Rewards or $35 each as pre-orders, but these Legion Builders were only $18 or $21 respectively. That’s a pretty huge difference and offers up a great idea of just how much those intricate paint operations can cost. Still, even without the added decos, this figure looks pretty solid along side my regular painted Dwarves and with only three of these guys on my shelf, I’m instantly regretting not picking up more. Next week, I’m swinging back to have a look at the last Orc!