DC Collectibles is ramping up their DC Icons line to epic proportions in 2017 (seriously, there are a ton of these things coming out!), but for now, 2016 has been experiencing some delays in the last two waves. And yet, here we have The Joker from “A Death in the Family.” I don’t know what the deal was with him, but he slipped out to online retailers about a month before his wave was due to hit the pegs. I was going to wait and pick up the whole shebang when it shipped, but in the end, I just couldn’t resist getting him early. 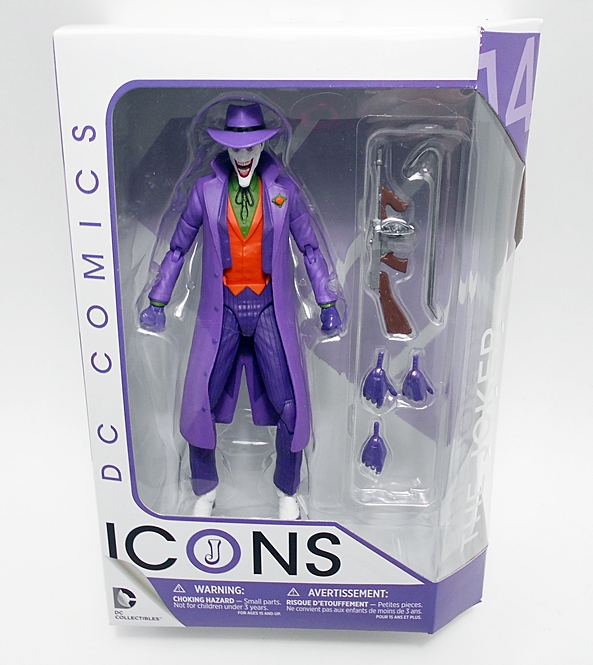 The package design is exactly the same as what we’ve been seeing all along. You get a nice, clean window box with a spiffy angled edge. The side panel has the figure’s name, number, and the source comic he’s based on. Everything is collector friendly and if space wasn’t such an issue, I’d certainly be keeping these packages. Sadly, they have to go to make room for more figures. So, let’s get him out of the box and check him out!

Damn, I love the look of this version. For a character that has spanned comics, cartoons, TV and film, it would be impossible for me to pick a favorite incarnation of The Joker, so many of them have their merits. I could definitely pick a least favorite, but why pour gasoline on that fire? With that having been said, this figure takes some of my all time favorite elements of the character and blends them together into a why-so-seriously great look. The purple high collared trench coat, the pimp hat, orange waistcoat, striped trousers, and spats is the epitome of Joker outfits for me, and I particularly love the long and lanky body that this guy is built on.

Complaints? I have a few. The way the waistcoat is painted on below the ab-crunch doesn’t look all that great, but I don’t see any other way around it. There are also a few stray marks of paint on my figure’s coat, but nothing too bad.

The head sculpt here is fantastic. I love how they did the mouth. You can see straight between the teeth and there’s all kinds of detail in there, including his tongue. The paint on the face is pretty solid too, so long as you don’t get in too tight. He’s got some sparkly eye makeup and the bright green they used for his eyebrows and hair is perfect. 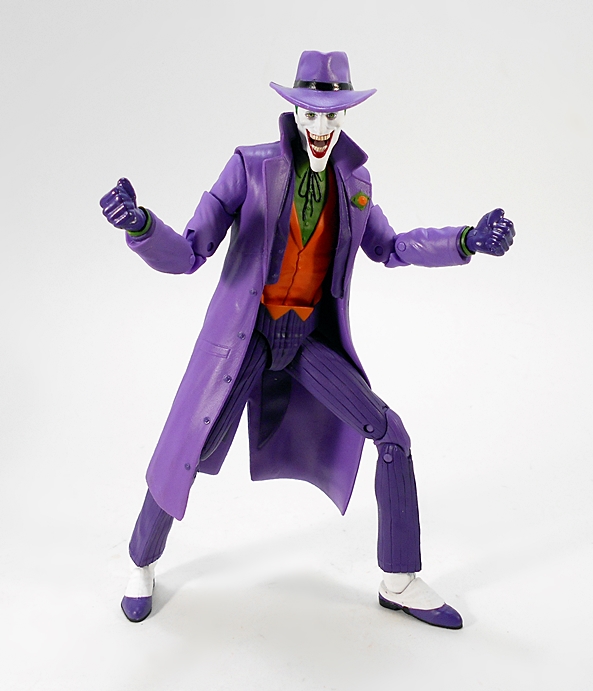 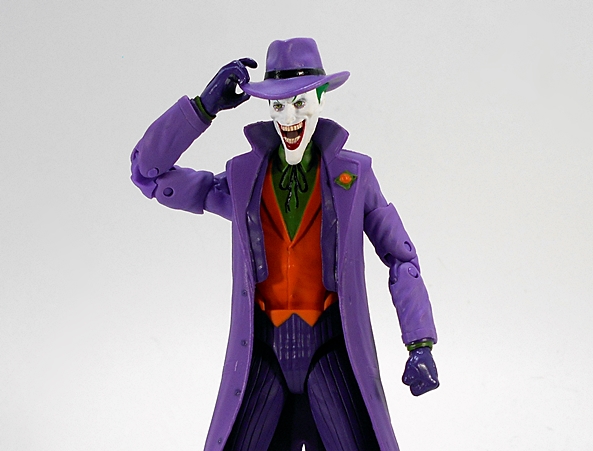 The articulation here is consistent with what we’ve been seeing. The arms have rotating hinges in the shoulders and wrists, double hinges in the elbows, and swivels in the biceps. The legs are ball jointed at the hips, have double hinges in the knees, and the ankles feature both hinges and lateral rockers. There’s an ab-crunch hinge in the waist, and the neck is ball jointed. You get a total of five hands with the figure, but they aren’t complete sets. The figure comes with a set of fists, but the other three are all right hands. Here’s my biggest complaint with the figure, but first, let’s look at the two accessories.

First, you get this nifty crowbar. There’s a hand designed to hold it, although the crowbar tends to slide in the grip. There’s a gap between the fingers if you want to pass it through and have him hold it that way, but I think it looks a little awkward.

And then there’s my favorite accessory, the Thompson sub-machine gun. This thing is absolutely fantastic. I mean, just look at the paint apps and sculpt on this little weapon and compare it to what Hasbro is doing with their Marvel Legends weapons. It’s night and day. I think this is even better than most of the incredible small arms NECA is putting out with their figures these days. And that’s high praise indeed! Unfortunately, DCC included what appear to be two slightly different right gun holding hands, instead of a left hand to grab the front grip of the gun. They were already including an extra hand, so why make it an additional and unnecessary right hand. I’m baffled by this.

Hand issues notwithstanding, this Joker is another top notch addition to my DC Icons shelf. This entire line has been quality from day one, and it’s exciting to finally be expanding on some of the more tightly related characters in the DC Universe. The Joker looks great alongside Harley or facing off against Batman. The fact that DCC is expanding this line next year pleases me to no end, and I’m particularly excited to pick up Firestorm when the rest of this wave finally hits.