I know, last week I promised to finish off the Doctor Strange Wave of Marvel Legends today, but then I realized that I’ve had this LEGO set built for a couple of weeks now and decided to take a detour. Sorry! Rest assured, Marvel Monday will return to its regularly scheduled Legends content next week!

After a whole year of not building any LEGO sets, I’m happy to be jumping back into the saddle again. LEGO used to be my consolation prize when I went toy hunting for figures and didn’t find anything new. But, now I seldom go out toy hunting anymore… it’s almost all done online, hence there has not been a lot of LEGO coming into the house. I’ll confess, I miss it, but when I’m shopping online there’s almost always a dozen other things on my Want List that take precedent over brick sets. This set, however, was sent to me from a buddy of mine a few weeks before Christmas and I had a great time building it, but it’s time to break it down soon, so let’s check it out! But before we do, I should forewarn you that my cat was all up in my business the whole time I was building this thing, so apologies for the higher than usual amount of cat hair in the snaps! 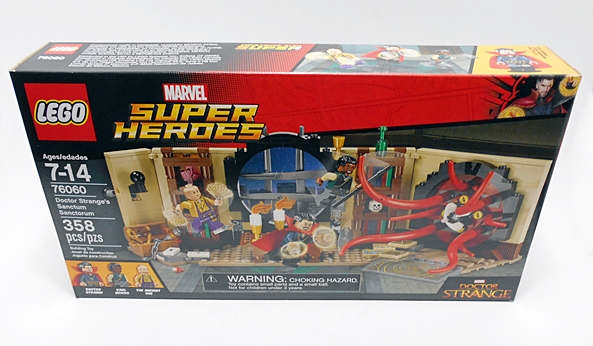 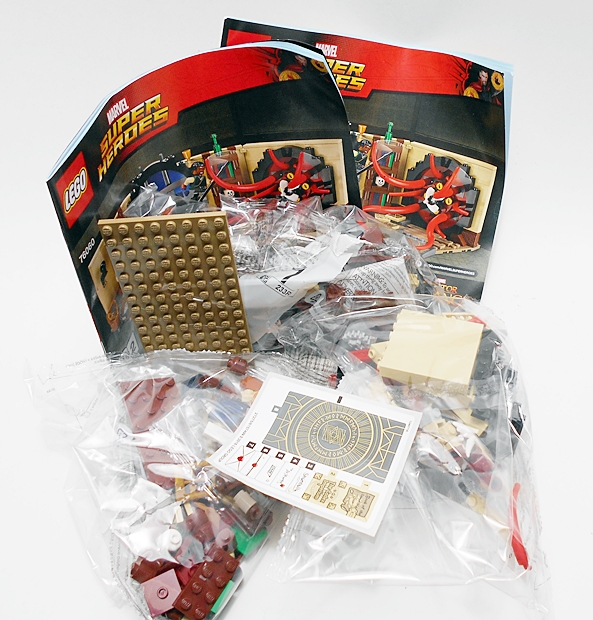 The set comes in a long, narrow box with the Marvel Super Heroes branding. It contains three numbered bags, containing 358 pieces, including a loose base plate. You also get a sticker sheet, two instruction manuals, and a small box containing Strange’s Cloak of Levitation. When you’re all done with the build, you get three Minifigs and the Sanctum Sanctorum playset. Let’s start with the Minifigs! 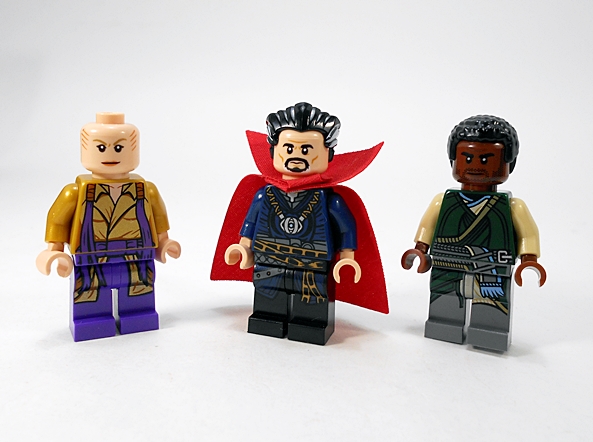 The set includes three Minifigs, which include Doctor Strange himself, Karl Mordo, and The Ancient One. It’s a decent selection of characters, and I’m still shocked that we got a Minifig of The Ancient One, but as far as play value goes, you’re limited to having these figs sparring with each other, because there’s really no villain here. At least not yet! 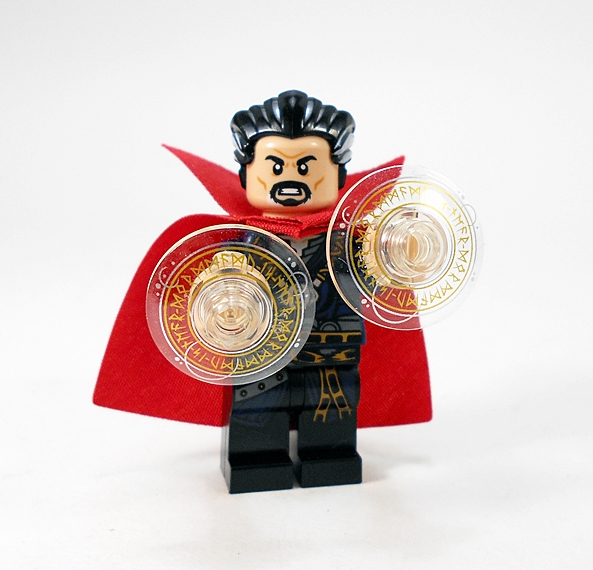 With that having been said, Steven Strange is a fantastic little figure and he will proudly take up residence among my other Marvel Minifigs. The Cloak of Levitation is comprised of both a collar and cape, and was an absolute bitch to get on. Strange features two printed faces and a couple of very cool magic effect parts. 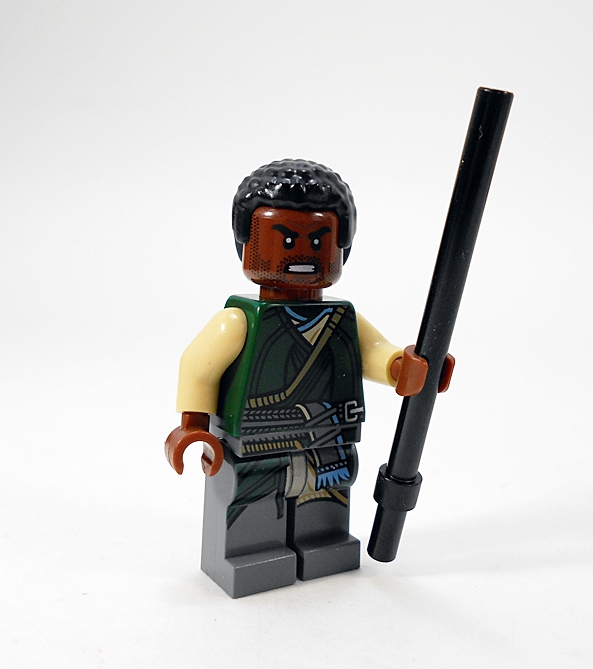 Mordo also features two printed faces and he comes with his staff. 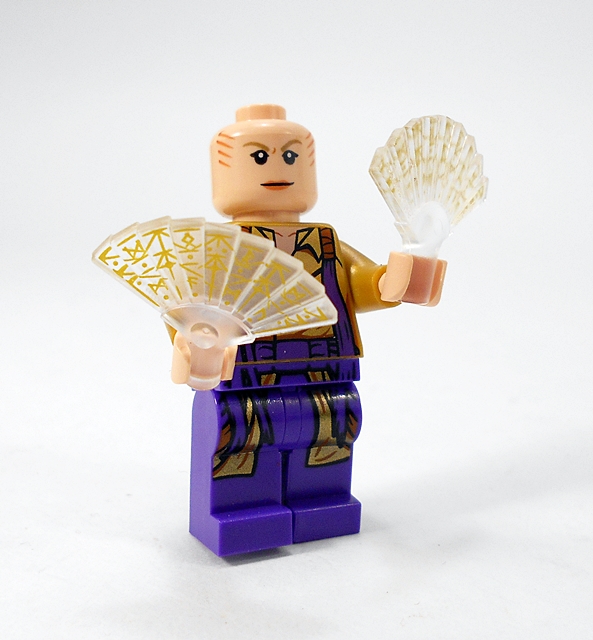 And finally, The Ancient One. She features just one printed face, which is to be expected since she doesn’t have a hair piece. She comes with a pair of mystical fan weapons, which are damn cool.  Moving on to the Sanctum Sanctorum… 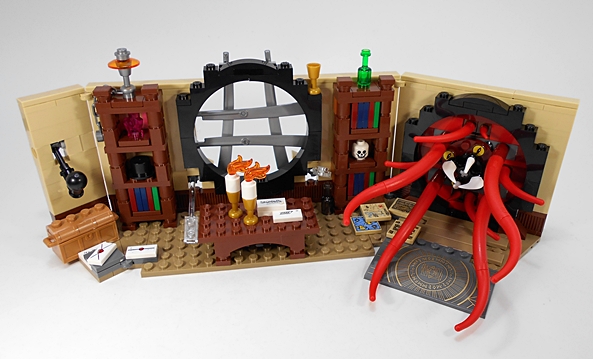 So, there’s good and there’s bad here. The good is that this is a wonderfully detailed set with some interesting play features. It’s also a pretty fun set to build, and apart from the bookcases, there isn’t a lot of redundancy here. I do feel, however, that those instruction manuals are spread pretty damn thin just to make the build seem more substantial. Let’s take a tour… 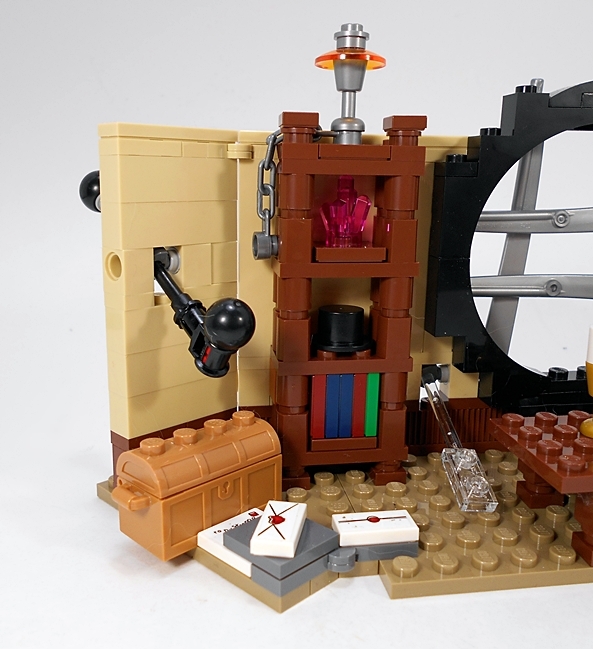 To the extreme left of the Sanctum there’s a treasure chest and a bookcase. The bookcase features some books on the bottom shelf, a top hat on the second shelf, and a mystical crystal on the third. The top features a lamp and a chain. That black lever thing is supposed to be used to levitate the Cloak of Levitation. Honestly, it was such a pain in the ass to get the Cloak on the Minifig, I’m not going to bother taking it off to try this out. It’s kind of an eyesore for what is a pretty mediocre gimmick, and it requires you to display your Strange Minifig without his Cloak, and who wants to do that? 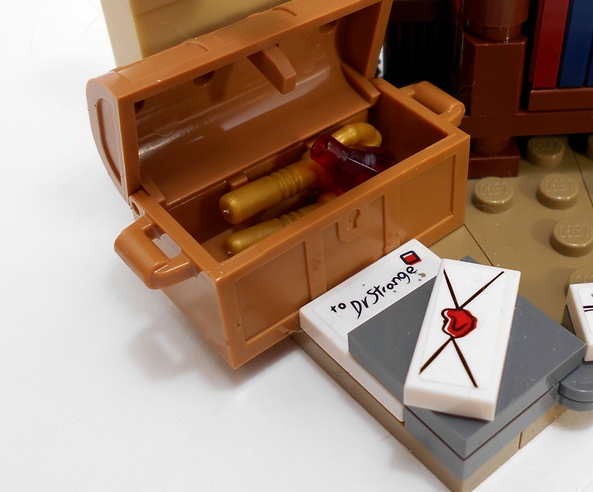 The chest opens up to reveal a couple of large keys and a gemstone. You also get a pile of letters on the floor. Most of the scattered ephemera in this set feature stickers. 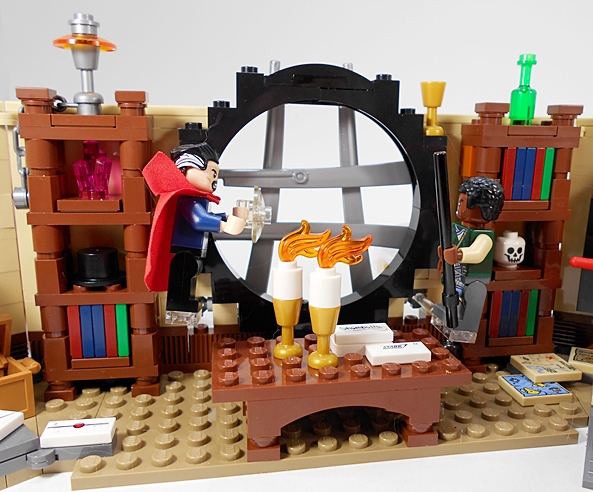 Moving on to the center of the Sanctum, there’s a large circular window and two transparent lever platforms to simulate the Minifigs dueling while levitating, which is pretty nifty. 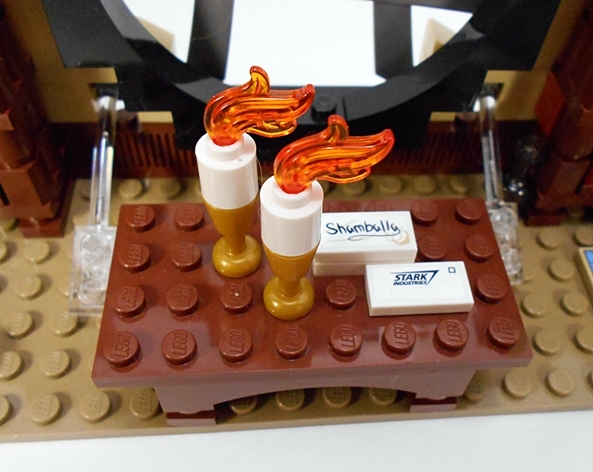 The table in the middle has a pair of lit candles and some more letters stacked up. One contains the WiFi code and the other is a mysterious letter from Stark Industries! 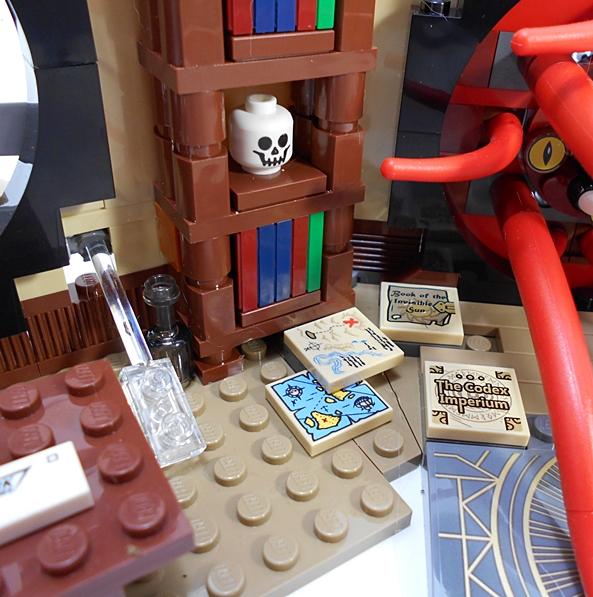 A little further to the right and we have another bookcase, this time with two shelves of books and a skull on the center shelf. There’s a bottle beside it and another on the top. You also get a pile of ancient books and maps. A couple of these are printed and are re-used from other sets. I’m pretty sure I have a few of those pirate maps already. The two books use stickers and one is The Codex Imperium! 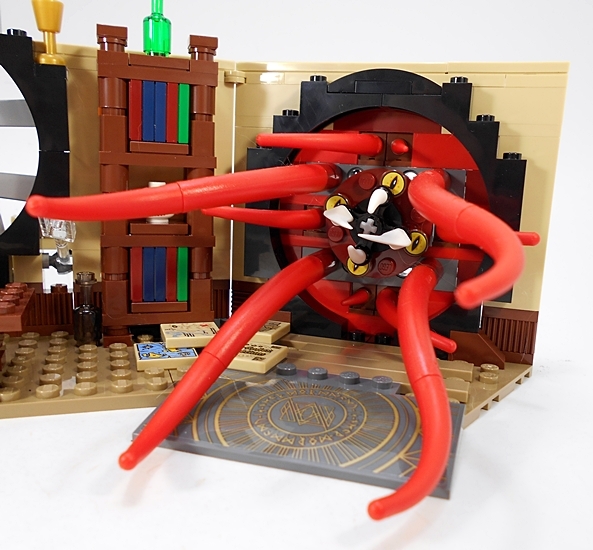 And then we get to the Cthulhu-inspired Portal Beast and it undoubtedly the star of this set. It’s a great looking construct and thanks to some gears, you can rotate a wheel in the back and make the four big tentacles squirm all over the place! The ramp leading up to The Portal features a large sticker with some runes and magical markings.

As you can see, a lot of the brick count in this set falls more into placed accessories than a meaningful build and that may disappoint some. The treasure chest and its contents, the various books and papers, all of these are just pieces that are placed around to add to the room’s clutter. Granted, it does mean you can easily customize the hell out of this set, but in the end I felt all the extra accessories made the build feel a little insubstantial. It also felt like this set should have been bigger. As far as I know, this is the only set we’re getting from Doctor Strange, and as a solitary set piece, I wish there was more to it. As it is, it feels way too narrow and confining. 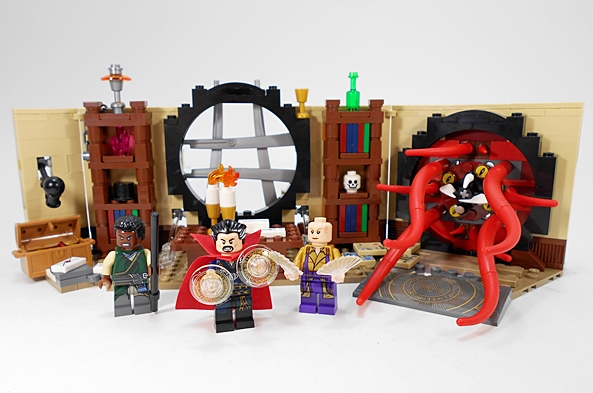 I like this set well enough. It was pretty fun to build and the Minifigs are excellent, although I would have liked at least one bad guy, like Kaecilius to be included. The set retails for around $30, which seems OK as far as LEGO pricing is concerned. But with that having been said, I would have been happier paying a lot more for a bigger set. As it is, this one feels a little too confining and it doesn’t live up to the very name Sanctum Sanctorum. I can only imagine what LEGO could have done with this set in the $50-60 range.