I know, riiiiight? It’s been forever and a day since I last looked at one of Kotobukiya’s Bishoujo statues and I have no excuses other than I’ve been prioritizing Marvel Legends so as not to fall too far behind. But it’s crazy to think that I haven’t visited with this line since the Summer of last year, and the last Marvel Bishoujo I showcased here was Ms. Van Dyne all the way back in October of 2015. Holy hell, that’s way too long. So today I’m opening up a brand new Marvel gal for this collection and it is indeed, Gwen Stacey, aka Spider-Gwen! 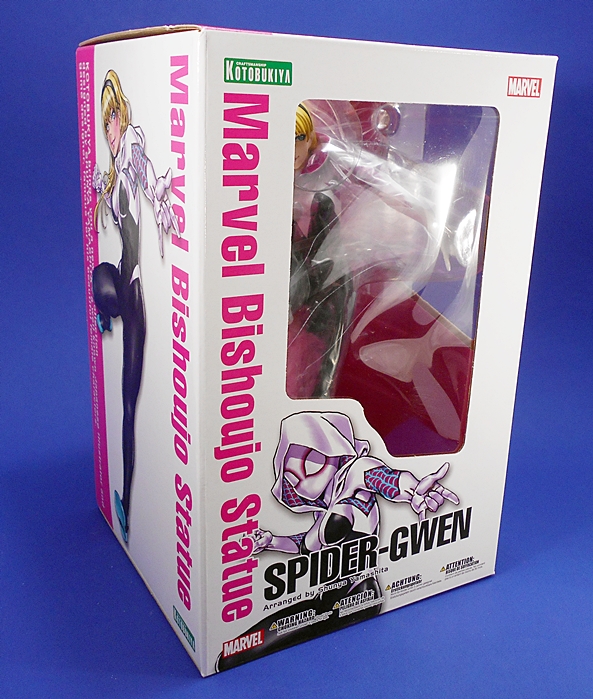 The box is pretty typical for the comic book based Bishoujos. It’s mostly white with some great artwork from Shunya Yamashita. You get plenty of windows to let the light in and the statue comes between two clear plastic trays. Spider-Gwen is one of the very few Marvel books that I’m current with (at least in collected trade format), and I enjoy it a fair bit. But if I’m honest, Marvel’s comics have been going through some really weird phases these days and I find it pushing me to spend more time reading DC’s ReBirth. But that’s an entirely different discussion for a different time and place. Gwen’s set up only requires you to peg her left foot into the base. She comes with her unmasked portrait, but I’m actually going to start with her masked. 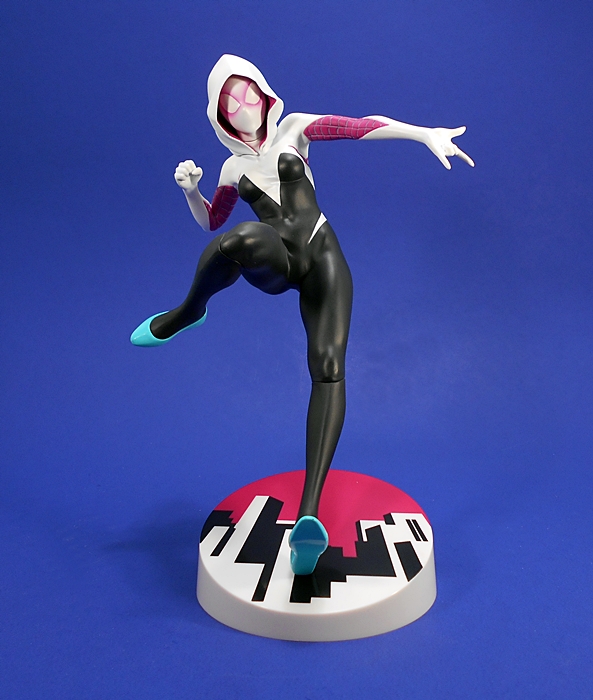 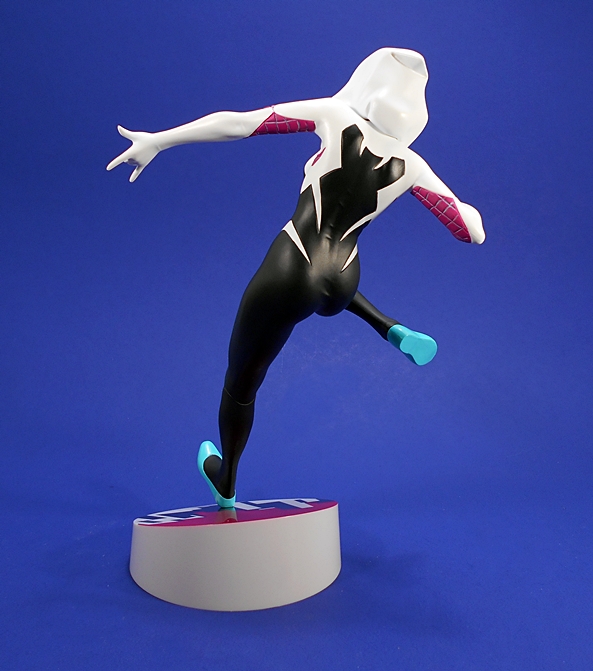 And here she is, and she is fantastic! There’s a lot to love here, but straightaway, it’s the balance of this statue that really impresses me. With just her left heel touching the base, Gwen pulls off a fantastic gravity-defying pose, as she pulls back her right hand to throw a punch and her left hand reaches out to thwip out another web. Not only does the composition of this piece just exude energy, but it also allows you to get a great look at the figure from every angle. Koto has done some amazing poses for their Marvel and DC ladies over the years, but this is without a doubt one of my favorites and it suits the character perfectly. 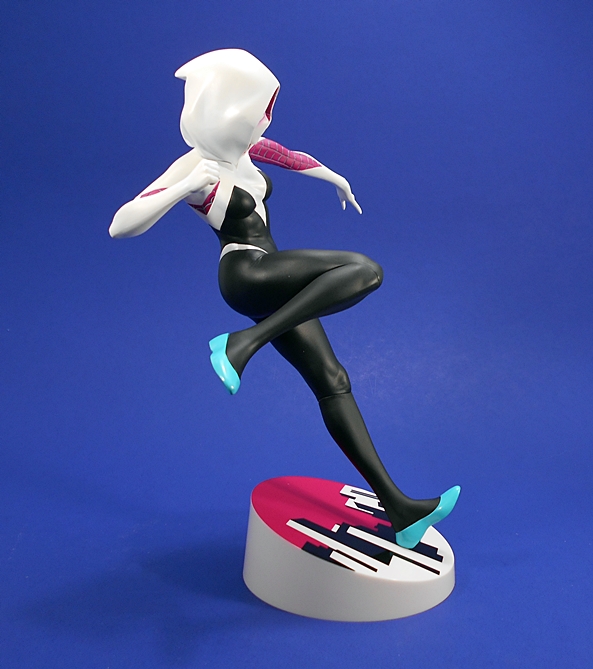 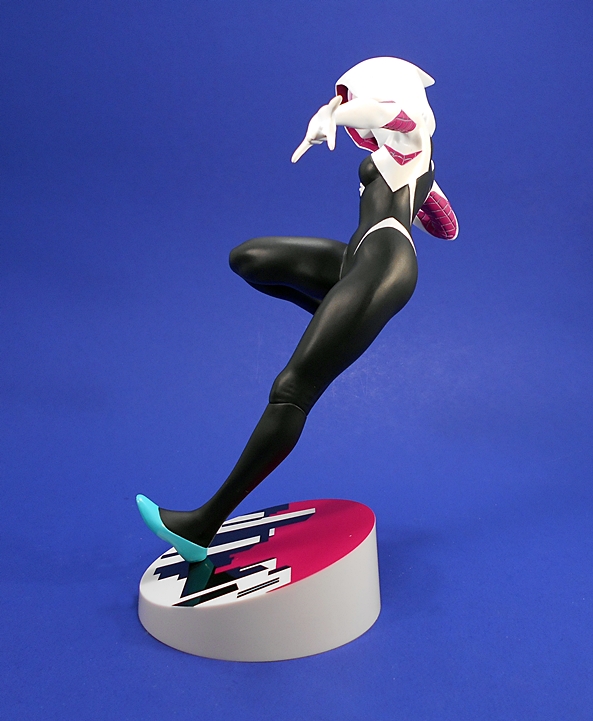 Gwen is somewhat unique among the Bishoujos in that she requires very little detailed sculpting and features a nearly entirely matte painted finish. Now, I don’t want to undercut the fantastic job they did with all her curves and contours, but apart from her lovely shape, the only real detail here from the neck down can be found on the cut web patterns on her arms and underarms, cut lines just below her knees, and on her shoes. You also get cut lines to reinforce the paint lines. Keep in mind, none of this is a criticism at all, quite the contrary, it’s totally appropriate for the character design and also serves to make Spider-Gwen a refreshingly simple figure. 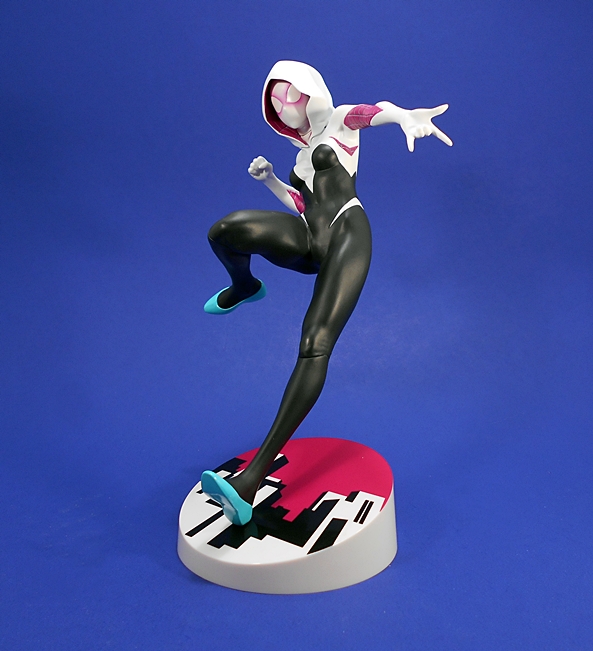 The other distinctive thing here that I mentioned was the completely matte finish, except for her shoes. Koto does indeed love their high gloss paints and in truth it does seem to go so well with so many of the super hero costumes. In this case, they were right to avoid it. The white here looks so bright and clean and the black is smooth and consistent. The plastic Koto uses for these takes white and black so well, which has sometimes been a problem with lines like Diamond’s Marvel and DC Galleries, which often show rubbing. The red webbing and blue shoes serve to break up the black and white costume beautifully. If I were to nitpick just a bit, the red in the webbing inserts doesn’t quite line up with the cut lines, but it’s not something that bothers me. 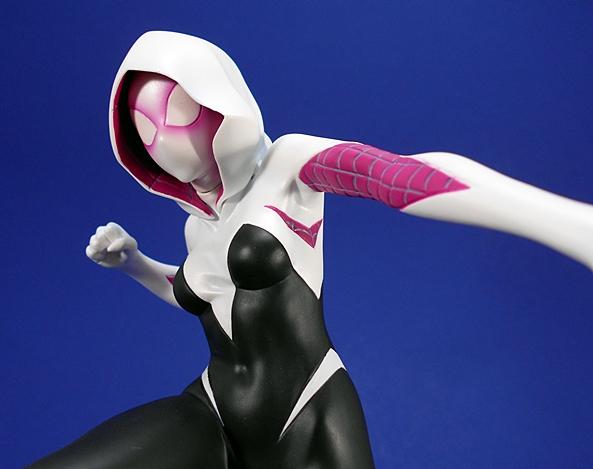 One thing that does, however, bother me is how I’m going to choose which head to display her with. The hooded and masked head is superb. It goes on all as one piece and there are tabs on the hood to make it connect with the body. The sculpted and painted web patterns inside the hood look great and the mauve spray that defines her eyes is spot on. It’s amazing how quickly this costume has become iconic for me and that’s a strong argument to go with this this option. On the other hand… 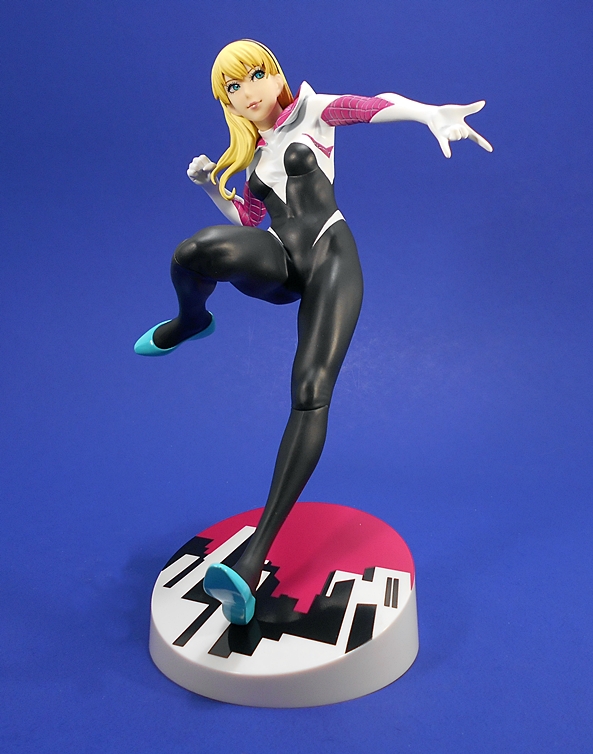 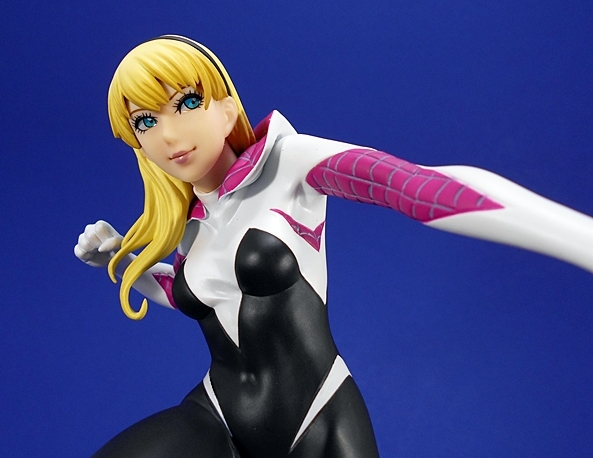 The unmasked portrait really conveys what the Bishoujo line is all about. This option is achieved with two pieces. The lowered hood tabs in first and then the head after that, and the combo is splendid. Gwen is one of those characters that fits right in with the Bishoujo style without a lot of tweaking at all. Her eyes and hair are perfect and that sly little smile is one of the best expressions Koto has done for this line. In the end, I’m probably going to go unmasked. The last time this decision was such a dilemma was with Koto’s Batwoman. 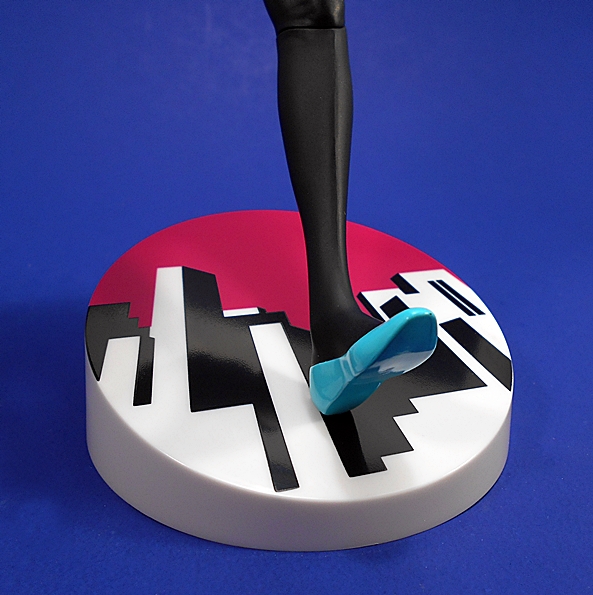 The base is a raised disc with an incline, very similar to the kind used for Wonder Woman v2. This one is painted with a black and white city skyline and a mauve sky to match her costume deco. It really matches the art styling of the comic very well. 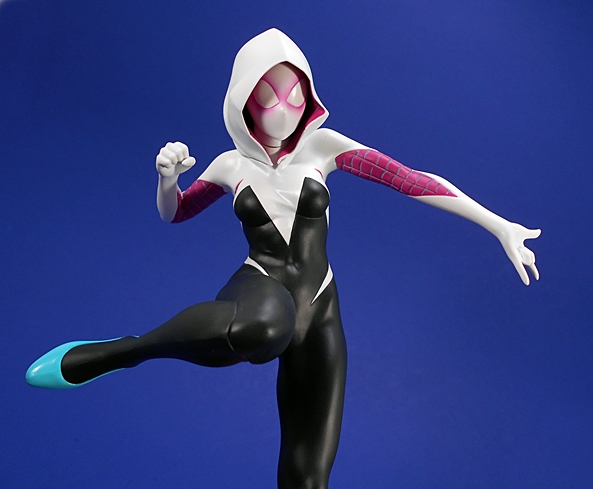 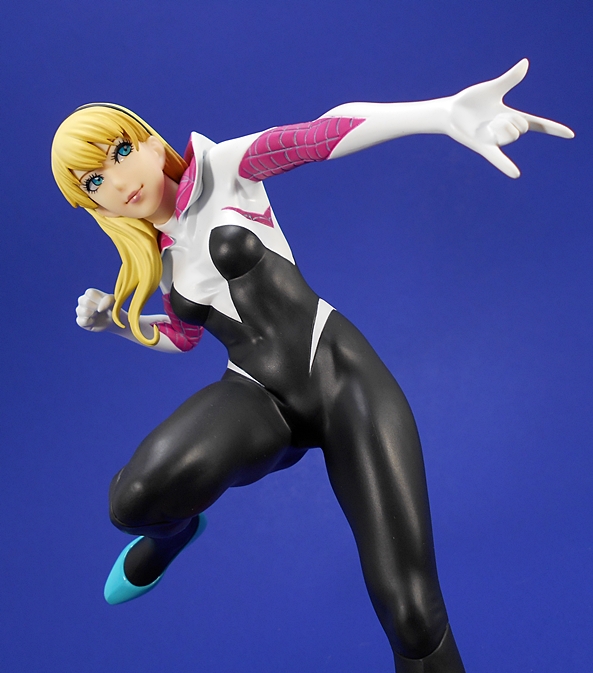 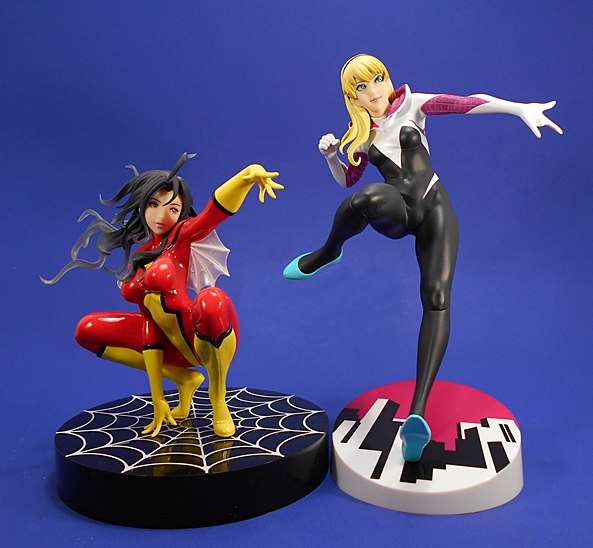 Spider-Gwen is quite simply Bishoujo perfection. What’s more, even if you aren’t a fan of Koto’s Bishoujo line (WHAT’S WRONG WITH YOU??), and you’re just looking for a really nice Spider-Gwen statue, you could display this statue with the masked portrait and no one would be any the wiser. And I should toss in here how great it is, after such a long absence, to be opening one of Koto’s lovely Bishoujo statues again. It goes without saying that it’s particularly nice to come back to such a very strong entry in the series. It’s true there have been a couple of Marvel gals that I skipped. I wasn’t really keen on their She-Hulk and I haven’t gotten around to picking up Lady Deadpool yet. Fortunately, there are a lot of Bishoujo ladies hitting the shelves either right now or very soon, so it’s safe to say I’ll have some more Bishoujos featured here again in the coming months, particularly Squirrel Girl, Harley Quinn v2, Wonder Girl, Lady Thor, Lady Loki, and Street Fighter’s Ibuki. So sit tight, Bishoujo fans. Things are going to start heating up again real soon.