It feels like a long while since I stopped in with some Anime Saturday love, but I have the day off and I made a big pot of coffee and I feel like putting on some Fate/Stay Night and opening up a Figma so let’s do this!

Yup, I love me some Fate/Stay Night. It was one of the first anime series that I purchased on Blu-Ray. It’s a go-to series for me when I want to lay around and binge watch something. And it’s also one of those cases where I kick myself for not getting on board with the Figmas in the beginning, because some of those have become stupid expensive. Luckily, Max Factory has been putting out reissues and different versions of the characters and I’ve been picking up a lot of them. Previously, I checked out Caster from Fate/Stay Extra, today I’m having a look at Tohsaka Rin from Fate/Stay Night. The packaging is typical Figma fare, so I’m not going to dwell on it. Instead, let’s open her up and get down to it! 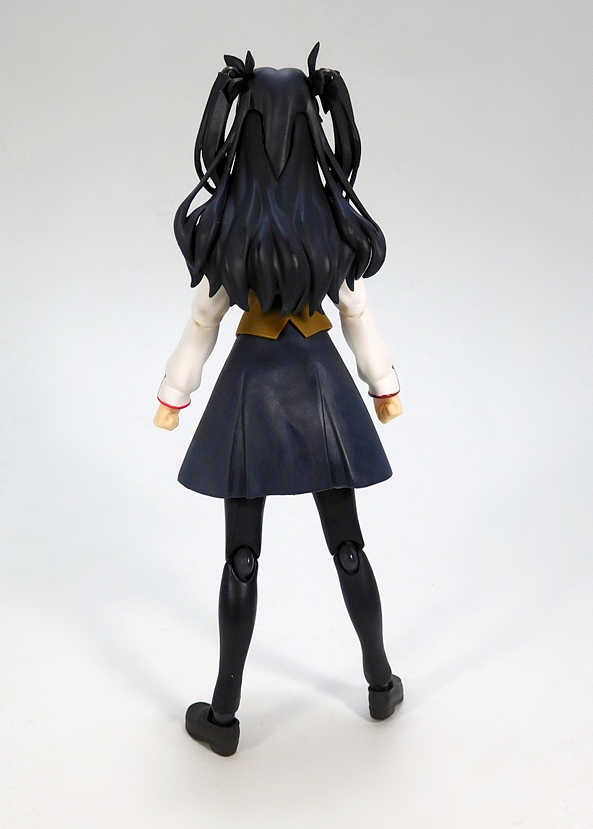 The first Figma release of Rin had her in her crimson pullover with the crucifix on the front. This one has her wearing a more traditional school outfit with a brown vest and poufy white blouse. I tend to prefer the former look a little more, but this outfit definitely allows for more details and perhaps a more interesting looking figure. There’s some particularly nice detail in her neck tie, which includes some beautifully painted gold borders and tiny crosses. She also has some red border striping on her collar and again on her sleeves. Her skirt is dark blue, and features some strategically placed slits so as not to hamper her hip articulation. One might be tempted to gripe about the lack of paint on her buttons, but they are actually brown on screen, so it isn’t a question of being frugal with the paint, but rather being show accurate.

I’ve always liked Rin’s hair style and the figure pulls it off quite well. The pigtails are on ball joints, so they can be positioned to hang down over the front of her shoulders, or sweep back so they’re out of the way. The back of her hair is also hinged to help accommodate the standard Figma figure stand, which pegs into her back as usual. The stock portrait features Rin smiling with large blue perfectly printed eyes. And as usual, she includes alternate faces, which are easily swapped out by removing the front of the hair piece. The extra faces include…

The shouty, “I’m going to kill you, Shiruo!” face. This is one that I’m likely to use the most, as I’m probably going to display her casting a spell.

And the the third and final choice is sad Rin face, which is wonderfully expressive, but I doubt I’ll use it much, because I don’t want my action figures to be sad.

Rin also comes with an alternative front hair piece, which includes her glasses attached to it. This piece works and looks great, and I love that they included it. It isn’t easy to do good looking glasses for figures in this scale, but this is a case where they nailed it perfectly.

And since this is a Figma, Rin also includes a passel of extra hands, which come in handy (HA!) for all your different posing needs. She has a pair of fists, a pair of pointing hands, a pair of splayed hands, a pair with her fingers together. She also comes with a single item holding hand, which doesn’t really serve any purpose here, since she doesn’t come with anything to hold.

Of course, no matter which pair of hands you’re using or if you’re mixing and matching, all of the right hands include her Command Seals printed on the back. 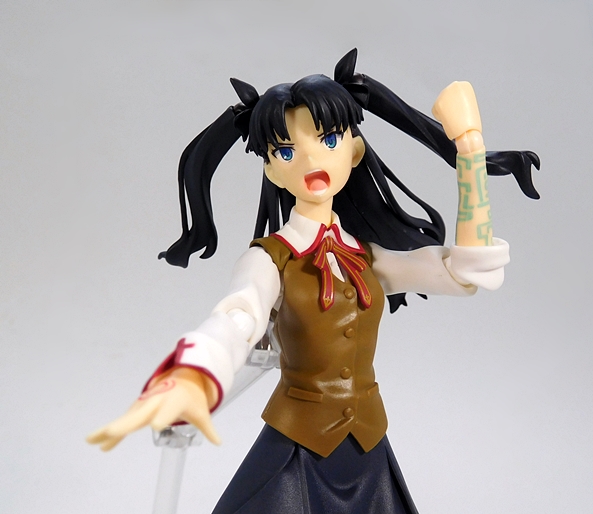 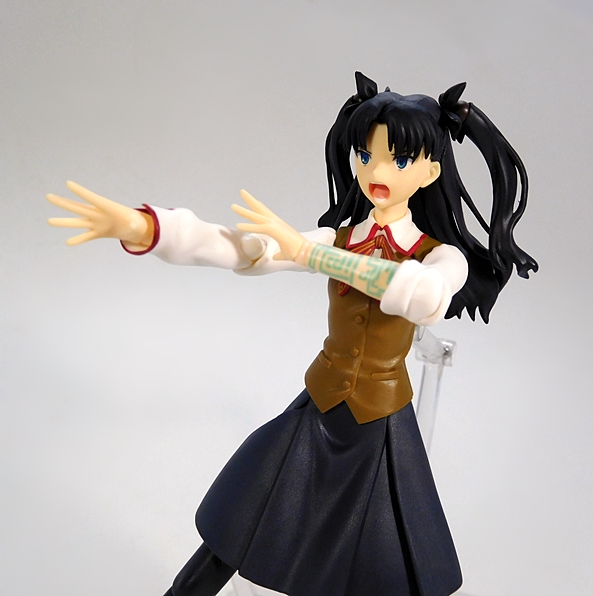 Also included is a swap out lower left arm. This one has the sleeve rolled up and includes magic effects printed on it. Pretty cool!

And here’s a first for me and Figma… Rin also has a pair of swap out feet, just in case you want her wearing slippers. Yup. Why not? These are actually a bitch to get on and off, so I doubt I’ll be using them much.

Lastly, Rin comes with a very cool set of magical effect parts. The circular ring plugs into either of her pointing fingers, and the directed part of the blast plugs into the other side of the ring’s center. The whole thing is cast in a vibrant red. It’s a fantastic looking effect, and it will most likely be the way I’ll display her the most.

I’ve had my eye on Rin 2.0 for a while and I’ve been waiting for her price to hit that sweet spot to make me pull the trigger. Of course, that’s a dangerous game with Figmas. If you wait too long you’ll find yourself paying for it later or doing without and hoping for a re-release down the road. In the case of this gal, I grabbed her at just under fifty bucks. That’s not an unreasonable sum for Figmas these days, as they tend to hit retail at between sixty and seventy, depending on how complex they are. Rin is a pretty simple figure, but she’s incredibly well done, and it feels like she came with just enough stuff to make me happy. Although, I would have happily traded the slipper feet for a tea set. I’m happy to say that I was also able to pick up her Servant, Archer, and I’ll do my best to find the time to check him out next Saturday.