Star Wars 3 3/4-inch Weekend is cruises onward. This is the third installment of what I’ve decided to call 5-POA’PALOOZA, I’m on my second pot of coffee and feeling one with The Force and maybe a little jittery from all the caffeine. Tired of Rogue One stuff? Ok, we’ll take a breather. For now, let’s fast forward to five more figures in the initial assortment from The Last Jedi.

As will be the case for a few of these 5-POAPALOOSA Reviews, I opened these figures a while ago, so I cribbed these official packaged shots from Amazon, which is only fair because that’s where I bought them. I’m also pretty sure I’ve paid for at least one of their warehouses, so it’s about time they paid me back a little. Anyway, I really dig this package design. It’s white and clean and some of the character art is wonderful. Look at that picture of 3P0! I think that’s borrowed from some vintage art, because I remember obsessing over a very similar piece of art when I was young. Also, I finally had some time to play around with that Force Link thing, which they were demoing at Target a few weekends back. Can’t say I’ll be buying one anytime soon. And with that ringing endorsement… Let’s start with Luke Skywalker! 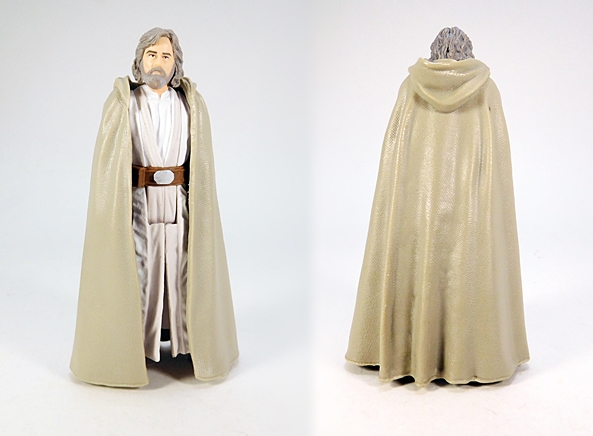 It was both cool and frustrating, how difficult it was for me to find this figure on the pegs. Cool because I love that the figure is so popular, frustrating because he shouldn’t be that hard for kids to find. I eventually gave up and bought him online with the rest of these. This is a very simple figure of Luke as we saw him at the end of The Force Awakens. He’s in his light colored robes and cloak and I think it’s just fabulous. The head sculpt and paint are particularly solid, I love that they added gray to his beard with some halftone printing. There’s even some detail in his tiny mechanical right hand. 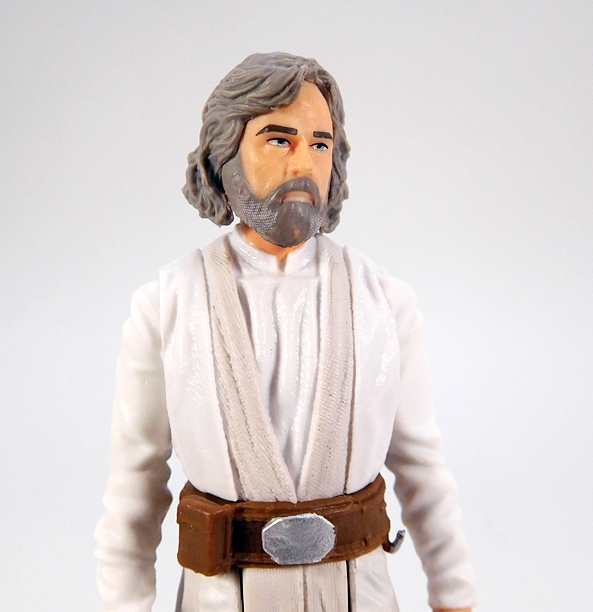 The plastic cloak fits the figure quite well by just resting on the shoulders. It comes off easily to reveal all the little details sculpted into Luke’s outfit. Again, for a simple outfit, they did some nice texturing to the fabric and some different shadings. The belt has a silver buckle, a sculpted pouch, and a tiny hook for the lightsaber hilt that he does not come with! In fact, the only thing he comes with is his robe. I’ve got nothing else to say, except I love him! Next up… Rey!

Rey sports her somewhat new-looking costume. Actually it strikes me as mostly the same as her Jakku costume, only gray instead of tan. I’m glad I didn’t pop for the Hot Toys figure of her outfit from the end of The Force Awakens, because it doesn’t look like she’ll be wearing it much. I do, however, have the 3 3/4-inch version and maybe we’ll see that before this weekend is over. Anyway… The sculpt here is very well done, with a number of different textures and details on display. The paint on her costume could have been a little tighter in some places, but it’s not bad. I do think the likeness is a big improvement over that initial release of Rey from The Force Awakens. I realize that’s a back-handed compliment, but I don’t think this one is too bad. Unlike Luke, some of Rey’s costume is cast in softer plastic and layered onto the figure itself and some of her hip articulation is hindered by that. But then if you’re after good articulation, these figures aren’t for you, anyway. 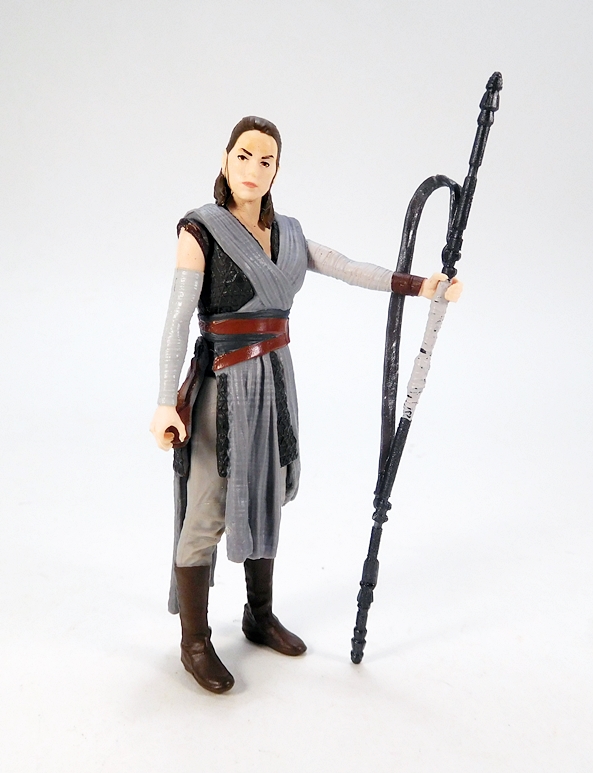 Also unlike Luke, who came with bupkis, Rey comes with three accessories: Her staff, her pistol, and Luke’s lightsaber. The pistol fits into the holster on her right hip, and I can’t show it to you because I lost it, goddammit! In my defense, it was very small and I recall being pretty drunk when I opened these. Then again, I think I may have lost the same gun for each of my 3 3/4-inch Rey figures. The staff is similar to what we’ve seen before, with a plastic shoulder strap. It is a new sculpt, but I’m guessing it’s supposed to be the same staff. 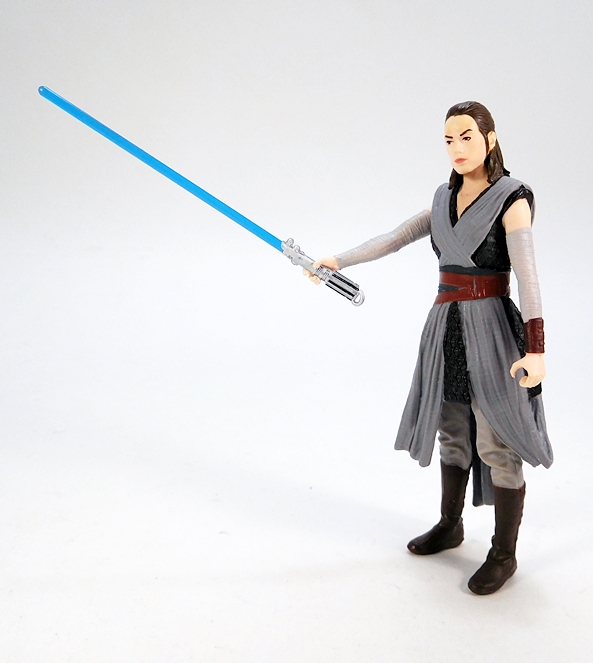 The lightsaber has some nice detail in the hilt, and it does have a ring, so theoretically you could hang it on Luke’s belt, but the blade is not removable, so in practice you can’t. All in all, I think this version of Rey is decent, but probably not the star of this show. This version of Rey was also released as a two-pack with the Praetorian Guard. Will we be seeing those this weekend? Maybe! Next up… Goldenrod!

I actually never picked up the 5-POA C-3PO from The Force Awakens, so this is my first figure of him in this scale in quite a while. I’m not sure if this is that same mold or not, but I will say it’s a fantastic little sculpt, the proportions are great, no details are missed, and the coloring is superb. Even the paintwork on the wires in his exposed midsection is super clean and precise. It’s nice to see he got his gold arm back. Or did he have that at the end of The Force Awakens? I think he did. It must be time to watch that one again!

Another nice bonus is that articulation isn’t as important with 3PO because he isn’t all that agile in the films. I barely even miss it here. I honestly didn’t expect to be this blown away by a 5-POA 3P0 figure, but if you’re in the market for one, this is a great one to get. I actually like it loads better than the allegedly premium Vintage Collection release, and I’ll just go ahead and say that it’s my favorite version of Goldenrod in this scale. Moving on to the bad guys, cue the Imperial March… here comes General Hux!

The Hux figure from The Force Awakens was pretty good, but this one is better! The most obvious difference is that he’s not wearing his officer’s cap and the likeness is far superior. This is a damn fine head sculpt for this scale. He’s wearing the same uniform with black trench coat, but this time Hasbro took a different approach with it, but sculpting the coat out of soft plastic and sculpting sleeves on the arms. This is the method they used for the 6-inch Black Series figure and it looks fantastic on this little guy. On the downside, you probably won’t be able to get him seated in any vehicles, because of the coat.

Hux comes with a blaster pistol, but sadly no holster to store it in. That was a gripe I had with TFA version too. Where does he keep that thing when he’s making those spittle-spewing speeches? He also comes with a mouse droid. I’m sure this guy is recycled, but I’m not sure if I own the previous release or not, so I’m happy to have this one. OK, that’s four figures down and one to go. Let’s wrap it up with a look at the biggest asshole in Star Wars history…

Kylo Ren is back and apparently now that he’s murdered his loving father in cold blood, he doesn’t have to hide behind a mask any more! His outfit has changed a little. He’s traded in his longer black robes for something more like a tunic. It has the same overall texture as the original Kylo figure, and the same sculpted belt. In addition to losing his mask, he’s done away with his hood and now has a cape that he wears on his shoulders and it’s easy to take off for when he needs to throw down. The cape looks great from the front, but it gives him a hunchback look from the back. I think the likeness here is pretty good for this scale. They did a nice job accentuating his scar, although it doesn’t have the creepy metal mesh, it’s just a red line. Still, neat though.

In addition to his cape, Kylo comes with his wicked and now very iconic lightsaber. He can hold it in either hand. Before I wrap this up, let’s take a look at the new versions of three of these figures with their counterparts from The Force Awakens.

Like I said earlier, Rey’s likeness on TLJ figure may not be a masterpiece, but she’s a huge improvement over the first TFA release. I think the Hux is a huge improvement from head to toe. Both Kylo Ren figures are pretty solid, but I’m surprised at how bad ass he looks without the helmet. I’m going to enjoy that in The Last Jedi. 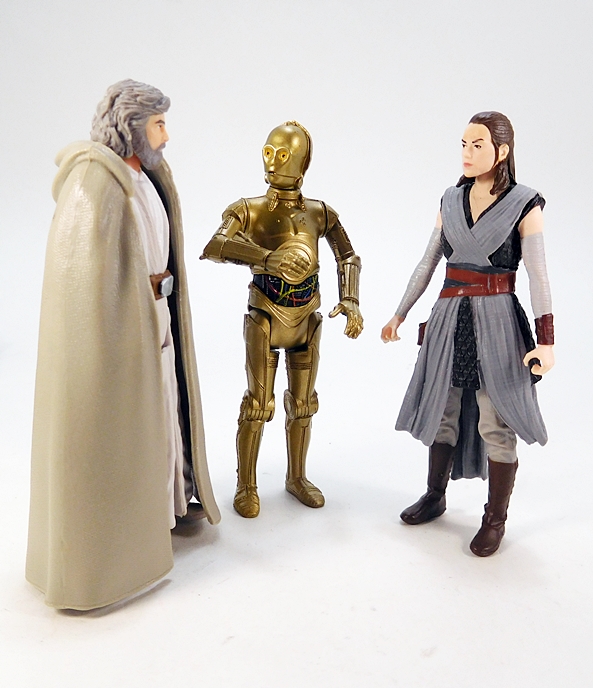 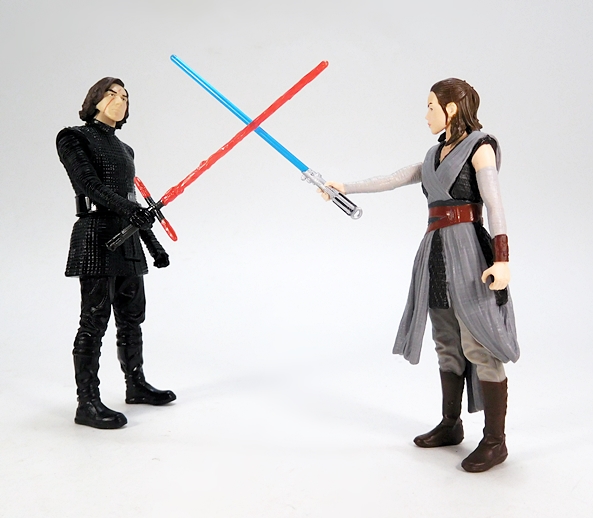 The last time I visited with The Last Jedi 3 3/4-inch line I was notably impressed, and that impression remains with these figures. I guess I can understand collectors dismissing these out of hand because of the limited articulation, but these are all very solid sculpts and great looking figures. 5-POA or not, the appeal is clearly still here for me, and I’m looking forward to grabbing up more of these! For now, I’m going to splash some cold water in my face and be back in a little bit and get back to Rogue One!