It’s Anime Saturday and cry foul if you must, but today’s figure is not from an anime series or Japanese video game. Nope, today we’re dealing with a Figma from the Western video game Overwatch, but it’s still a Figma, and so I’m sticking this review here. Also, I pre-ordered Tracer forever ago and once she arrived I really couldn’t wait to get her opened and check her out. And here’s a fun fact: I don’t even play the game, but I’ve watched a bunch of the videos and I love the character designs in general, and that goes double for Tracer.

While Tracer comes in a pretty standard Figma window box, the white and orange color scheme really makes this box stand out among the others on my shelf. She’s Figma #352, if you’re keeping track, but Lord know’s I’m not. I can’t even make any sense of their numbering scheme. As usual, there’s some English on the box, but a lot of it is in Japanese. The packaging is totally collector friendly, but if you don’t want to keep the box, you get a handy Figma-branded Ziploc bag to keep all those extra bits in.

Cheers, Love! The cavalry’s here! And oh, boy doesn’t she look like she just jumped right out of the screen? The creators did a beautiful job bringing her digitally rendered costume to plastic, from those tight pants with sculpted side panels to her very British looking bomber jacket with it’s high collar and flared sleeves. Even the Chronal Harness looks so good, if I didn’t know better, I’d swear it’s actually keeping my figure anchored in the here and now. I especially dig the translucent blue plastic used on the front and back to simulate the glow of the Accelerator. Her Tracer Bracers look really nice too, and for the record, they do not open up to hold her pistols, but then I wasn’t really expecting them to be able to make that work at this scale. 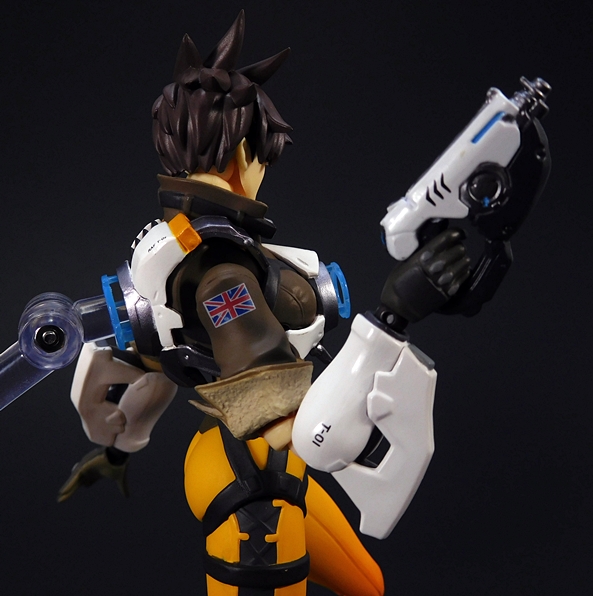 The paint quality and overall coloring on the figure is also excellent. One of the appealing things for me about the Overwatch designs are the beautiful vibrant colors and that’s certainly the case with Tracer here. The bright orange pants contrasts beautifully with the immaculate white and gray shoes and bracers and the matte brown and tan of the jacket. Everything about this figure just pops! Other great little touches include the immaculate shoulder patches on her jacket, the silver paint on the zipper, and the crisp “T-01” printed on her bracers. 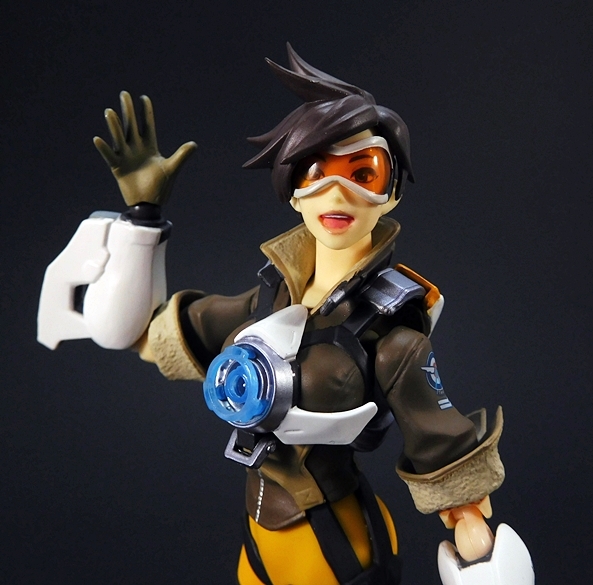 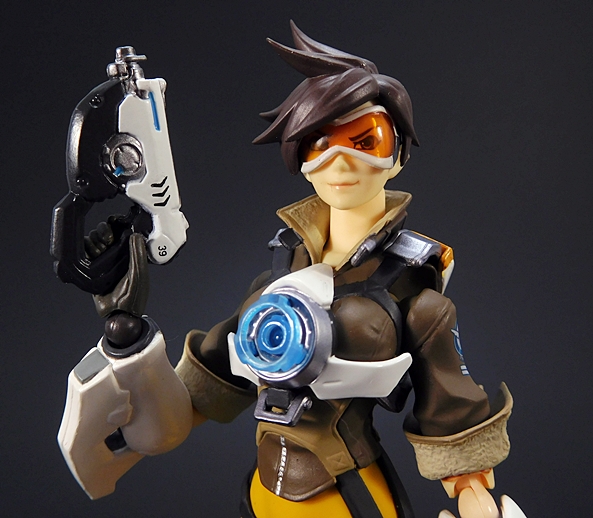 Of course, this is a Figma, so you know you’re going to get extra hands and faces. Tracer comes with three different facial expressions. You get a regular smile, a more jubilant open mouthed smile, and a more determined expression with a wry little smirk. Whichever face you go with, each one includes the same orange tinted goggles, which are clear enough to see her eyes (at least when my studio lights aren’t reflecting off of them!) and I love the way they sculpted her spiky hair. It’s just perfect. The hands include a pair of fists, splayed hands, gun-holding hands, accessory gripping hands, a and a left hand offering a two-fingered salute. They’re all pretty easy to pop in and out, although I tend to just keep the guns in the gun-hands. 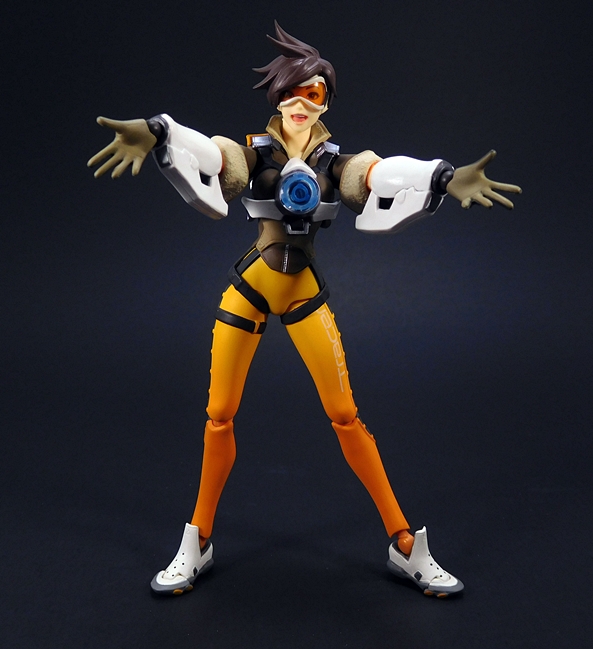 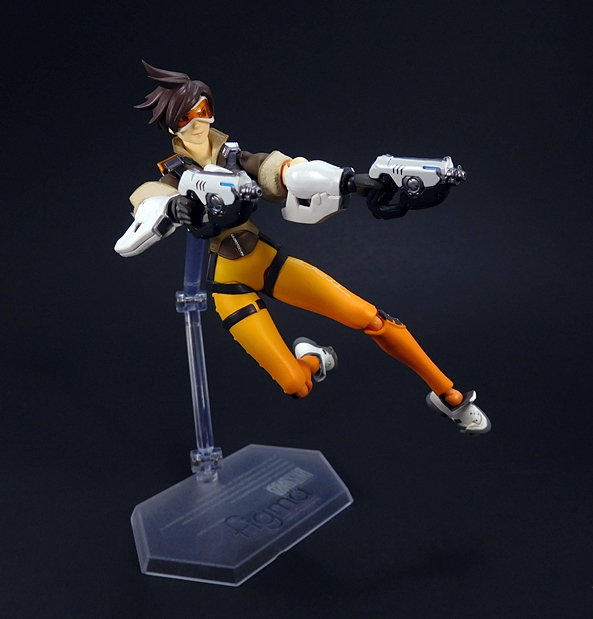 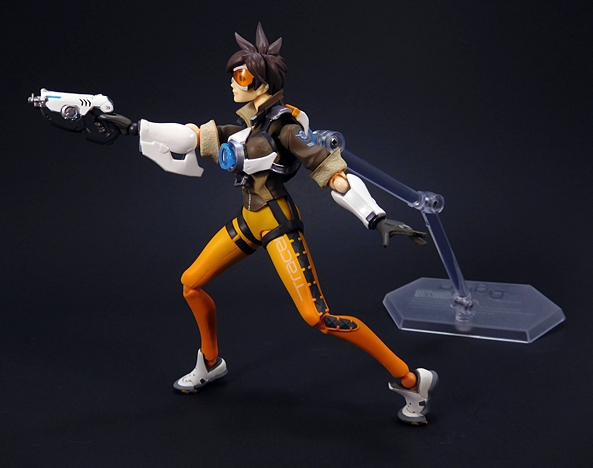 Apart from the hands and faces (and the ubiquitous Figma figure stand), Tracer doesn’t come with a whole lot of accessories, but she does have the essentials. Naturally, she has her trusty pair of pulse pistols, and these are indeed a beautiful set of guns with great sculpted detail and crisp paintwork. Maybe some effect parts for the guns would have been cool, but probably not necessary.

The other accessory is a Pulse Mine and this thing is super tiny. It’s so tiny, I almost missed it in the box. One of her accessory holding hands is perfectly sculpted to hold it and despite its size, there’s some really nice detail painted onto it. 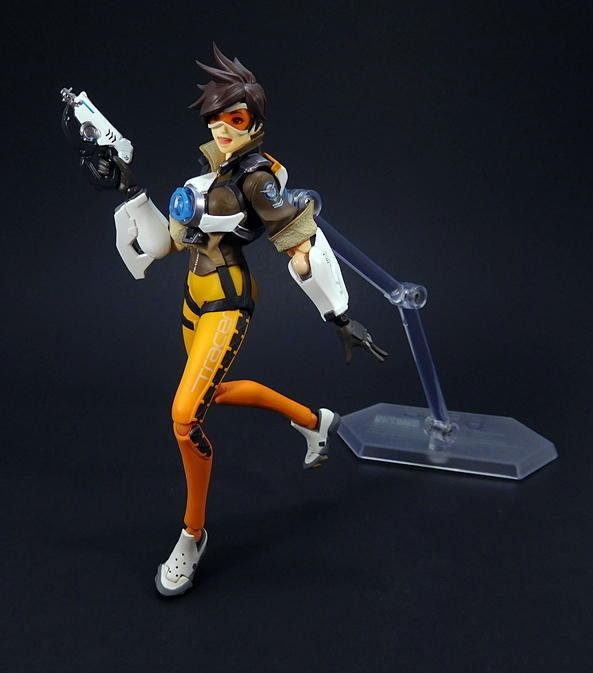 If you can’t tell, I’m absolutely smitten with this figure. I’ve been waiting for Overwatch figures ever since the game first came out. It seemed like a sure thing that NECA would be the ones to do them, since they were partnering with Blizzard on the Heroes of the Storm line, but that line fizzled and I guess the cats at Blizzard cut a deal with Max Factory instead. There’s no doubt that the designs work well with the Figma format, and I’m sure we’re getting overall better quality product, but I can’t help but think NECA would have delivered more characters. As of right now, the only other Overwatch Figma that I know has been revealed is Genji, and he’s due out this Summer. While there are certainly some characters I’m looking forward to more than others, I’ll probably pick up whoever they release, if only to do my part toward seeing the line succeed. Because I definitely want more of this! And who knows, someday I may actually play the game!