It’s another V-HACKS Friday, Toyhounds. As promised, Today I’m finally wrapping up my look at the three Gorgon Sisters from Series 1 of Vitruvian HACKS. I checked out Medussa waaaaay back when I reviewed the very first wave from the Kickstarter. I had a look at Eurayle, the youngest of the three, just a few weeks back. And now it’s time to check out the oldest of the three Sisters, Stheno!

Here’s the usual HACKS packaging, featuring the landscape-orientated card, collector friendly bubble, and some really beautiful character art. The back of the card has the usual “Collect Them All” headshots of the first four waves and a little bit of a bio of Stheno. The Eldest Gorgon Sister can not only turn her victims to stone, but she can also transform humans into Gorgon soldiers with a simple bite. She was released as part of the second wave of Series 1 and I’m super excited to finally get her open and check her out!

Hot damn, is this a gorgeous figure! I love how each of the Gorgon Sisters have their own thing going on. Medusa is the classic half-snake lady, Eurayle is the most human, with just the snake hair to give her away. Well, Stheno lies in between. She’s mostly human looking like her youngest sister, but she’s got the full on snake hair mantle that puts Eurayle’s to shame. But I’m getting ahead of myself. First off, Stheno is built on a dark-skinned female buck, and as usual her entire costume is made of separate pieces and actually worn by the buck. That’s especially impressive here because of how intricate the costume is and that it’s all done in 4-inch scale. It’s also interesting to note that to my knowledge, BFS has never reused any of these armor pieces. That makes this figure one of the most distinctive looking releases in the Series. 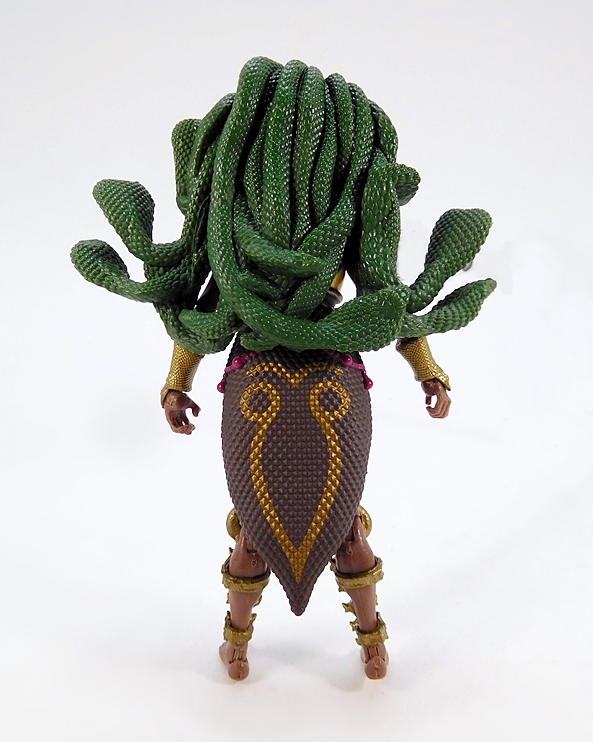 The costume consists of some very intricate gold armor strapped to her lower legs. The criss-crossing gold is a little evocative of a snake pattern, but with the pincer-like ends at her knees, I also find them to have a scarab-like appearance, giving her a bit more of an Egyptian flavor than Classical Greek. She has a pair of painted panties and above that a belt, again with an intricate golden weave pattern and a snake-skin skirt that hangs off the back. Her top features a golden brassiere and some beautifully sculpted shoulders. She also has a pair of arm bracers with some remarkable snake texturing on them. I really have to give BFS some major kudos for the amount of detail they’re able to pack into such small pieces. All that gold in Stheno’s outfit is broken up a bit with some purple stones and beads. This costume is quite simply striking in every way imaginable.

And yet the real selling point of this figure is still probably the majestic head sculpt. Stheno’s face is beautifully sculpted with some pronounced cheek bones and sharp paint to the eyes and lips. Her headdress features more of ornate gold finery to match the rest of her outfit, with a purple bauble right in the middle of her forehead. And then you have her outrageous mane of cobra hair. It’s something that just has to be seen to be believed. The individual cobras fan out to both sides with each of their hoods fully deployed. Amazing!

Now, as fantastic as Stheno looks, all this detail comes at a bit of a price and the articulation, poseability, and overall stability falls victim to the character design. While the buck features all the great points of articulation that I’ve come to appreciate in this line, the top of her armor keeps her arms from being able to go flush with her sides, so they’re always going to be sticking out. On the other hand, her tight fitting snake skirt means that her hip articulation is a bit hindered as well. Finally, the giant snake mane combined with tiny bare feet means that Stheno is not a figure that is easy to keep standing upright. She’s quite back-heavy and in virtually all of the shots in this review, I’m using some kind of assist to keep her standing. I don’t want to harp on these points too harshly, because I think it’s a fair trade-off to get a figure that looks this striking.

While Boss Fight tends to stuff these figures with tons of accessories, Stheno comes up short in that regard with only her serpent staff, figure stand, and an extra pair of hands in her inventory. Again, it’s not something I’m going to get upset about because clearly a lot of attention went into this one-and-done outfit, plus the extra plastic needed for her slithering coif is probably the same amount that goes into all those accessories included with other figures.

Now, with that having been said, the staff is a very cool piece and feels very appropriate for the character. The gold staff features a purple globe at the top and a gold cobra spiraling up the rod and crowning the purple orb with his open hood. 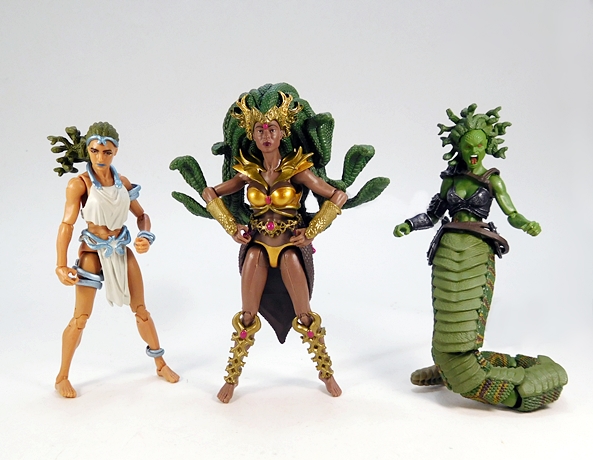 Vitruvian HACKS is a line built around parts sharing and recoloring and there’s nothing wrong with that because Boss Fight knows how to make it work. But it also makes it all the more special when you get a figure like Stheno in the mix. She’s a stand out addition to the collection, not only because she’s an absolutely gorgeous sculpt, but also because she feels more one-of-a-kind than a lot of the other figures in this Series. That’s not to put down the myriad versions of Hoplites and snake-lady repaints, as they’re all excellent figures. I’m just glad I waited until this late in the game to get around to opening Stheno, because she adds a strong shot of variety and distinctiveness among the legions of Greek Soldiers and Gorgons. And while I appreciate the fact that this costume hasn’t been used since, I wouldn’t mind seeing it recolored and used in Series 2 on a female enchantress of some sort.