I make it no secret that back when the MCU was still forming The Avengers, I was pretty pissed that Hank Pym and Janet Van Dyne were not getting their due. But as things progressed, I realized that the MCU was doing its own thing and it was hard to argue with the results. And while we never really did get to see Hank and Janet in action beyond a quick missile-stopping scene, the duo of Scott Lang and Hope Van Dyne make for a pretty damn good substitute in the latest Marvel cinematic outing. Last week I checked out Ant-Man, now let’s take a look at The Wasp! 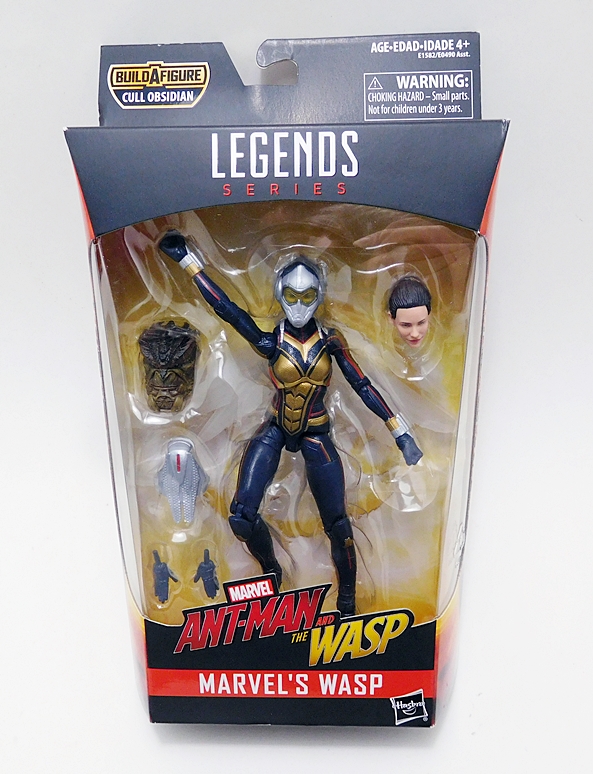 Yeah, Ant-Man and The Wasp was a damn good movie and just the right follow-up to the angst-ridden downer that was Infinity War. It was fun and an all around perfect mix of action and laughs. Unless you stay for that post-credit scene in which it kind of becomes a quite a downer as well, but I guess they had to tie it into Infinity War somehow. In any event, I doubt we’ll see any more figures from this movie, but that’s probably why they slid the incredible shrinking duo into the second Infinity War wave. But hey, I’m just glad we got these two. 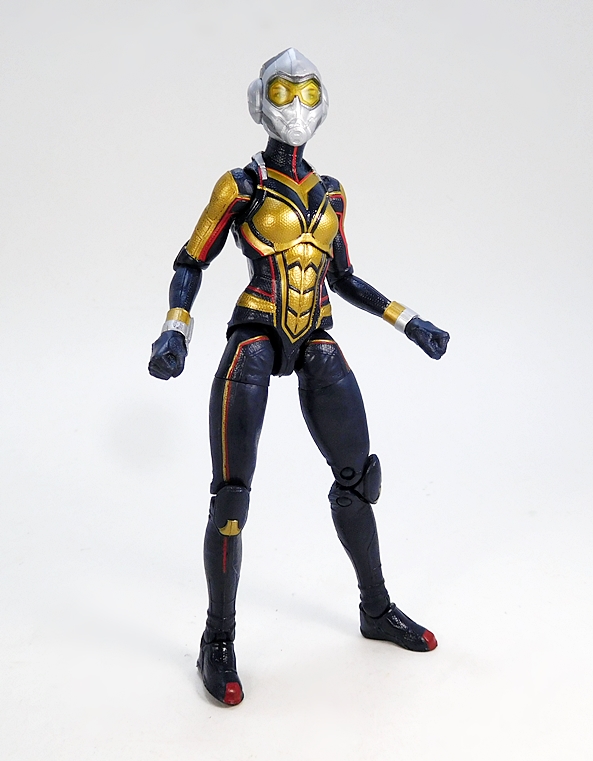 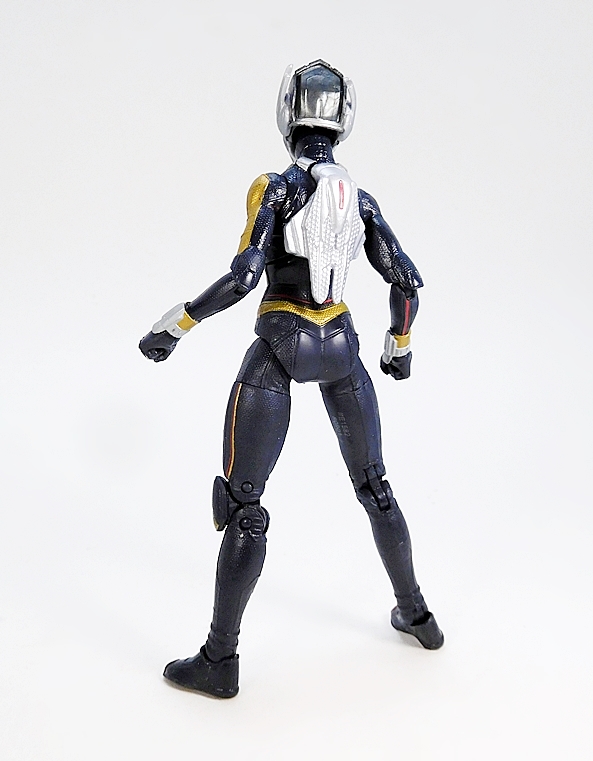 Hope comes packaged with her helmet on and that’s where I’ll start. I really dig this costume a lot. It pays respects to the The Wasp’s modern comic appearances with the black and gold outfit, which has always been a pretty good look for her. A majority of the suit is textured to give it the same finish as the Ant-Man suit, and in addition to the gold pattern on the front of the torso, you also get some gold on the arms, bottoms of the knee guards, and some striping on the legs, along with some hits of red. The arms feature the cuffs, which presumably house her blasters and she comes with a pair of fists attached. From the back, Wasp features a removable backpack, which I’ll come back to when we add her wings. All in all, this looks to me like a more refined suit than Scott’s, and that’s exactly what it’s supposed to be. 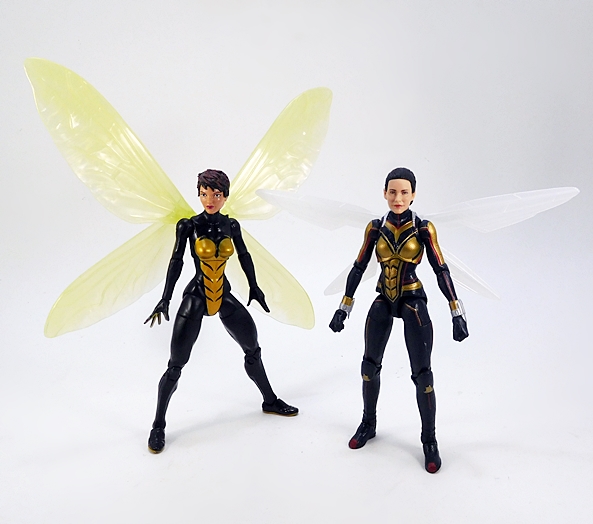 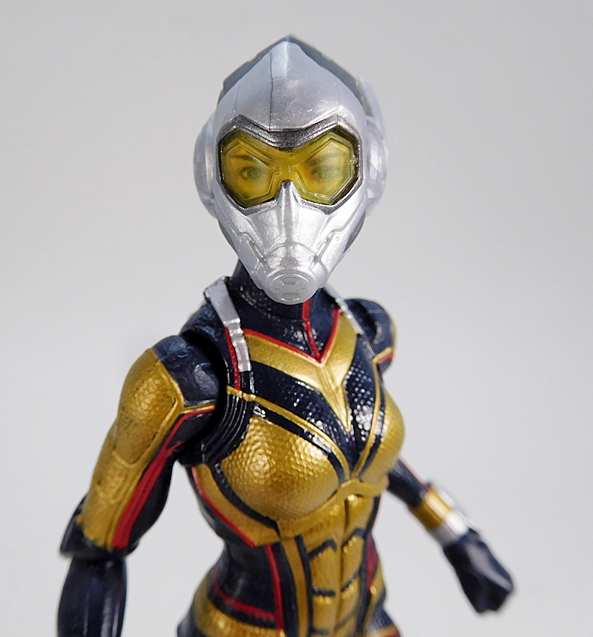 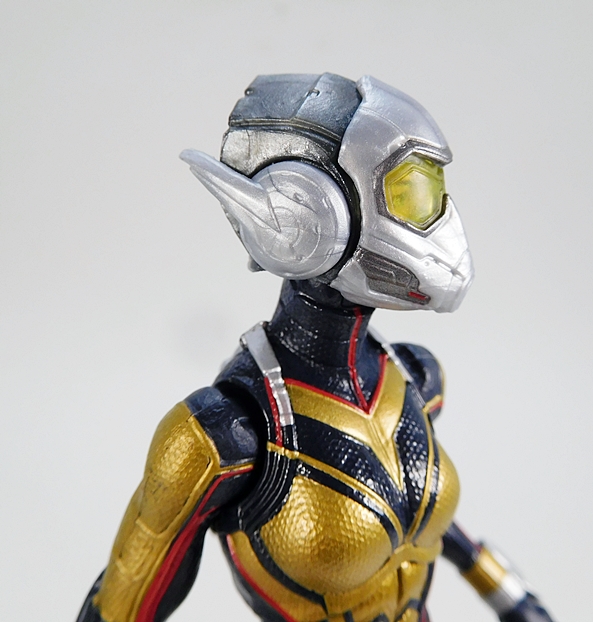 The helmet sculpt is solid, although it’s cast in that same questionable gray plastic as Ant-Man’s helmet. I think this one turned out a little better, but I’m still not a fan of the swirly patterns in the plastic. If I can get another Wasp figure at a decent price I may actually wind up trying to paint it proper silver. The biggest win here are the eyes being visible through the yellow lenses in the mask. I love that they were able to make that work and it looks fantastic. 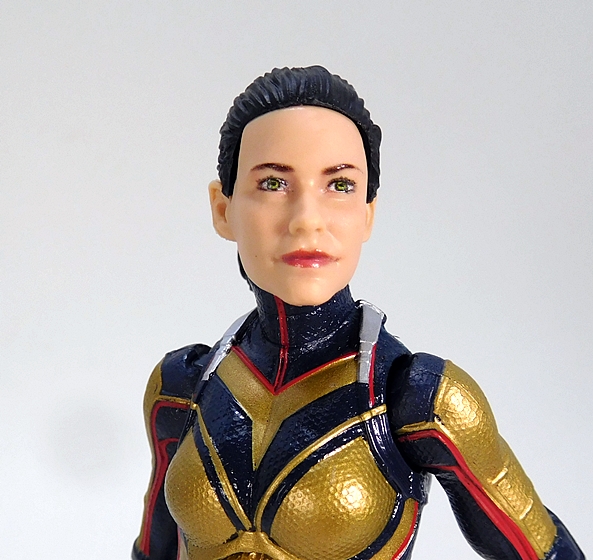 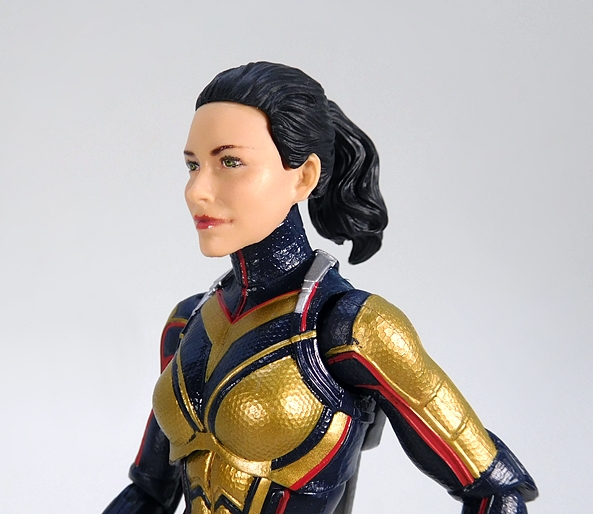 And you also get an alternate unmasked head, which is a pretty good likeness to Evangeline Lilly. As always, the new printing technique tends to break down when you get in real close, but in hand the lips and eyes look fantastic, as does the sculpted ponytail. Nice job! 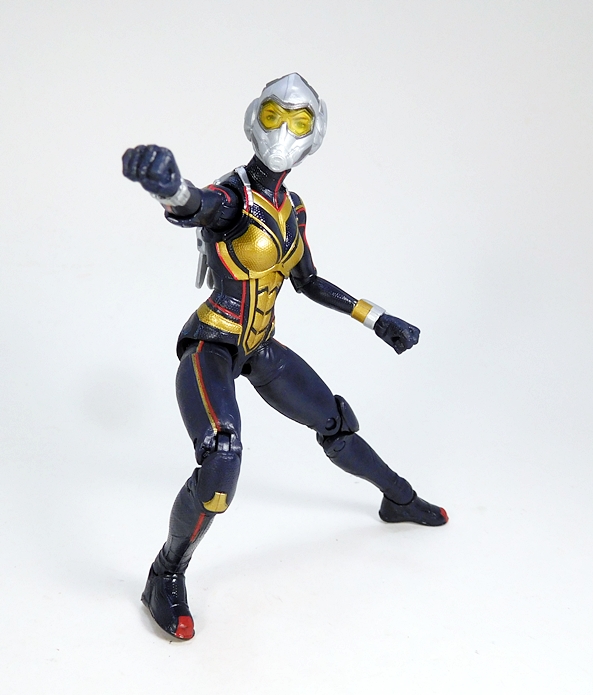 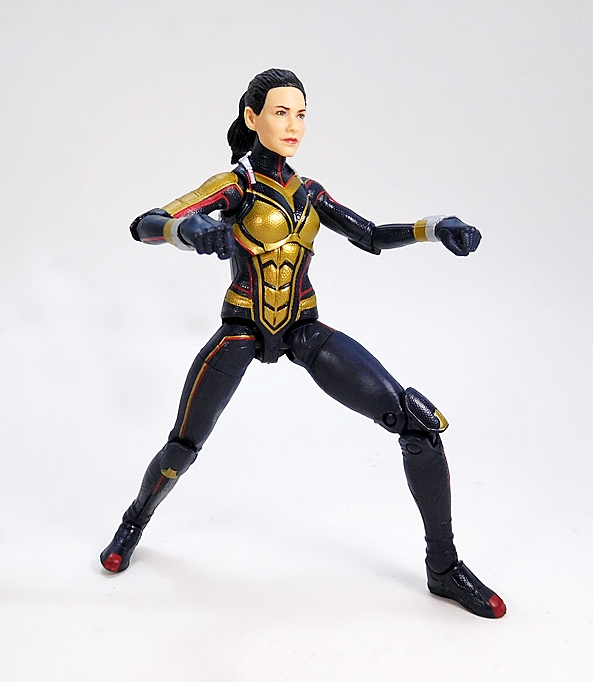 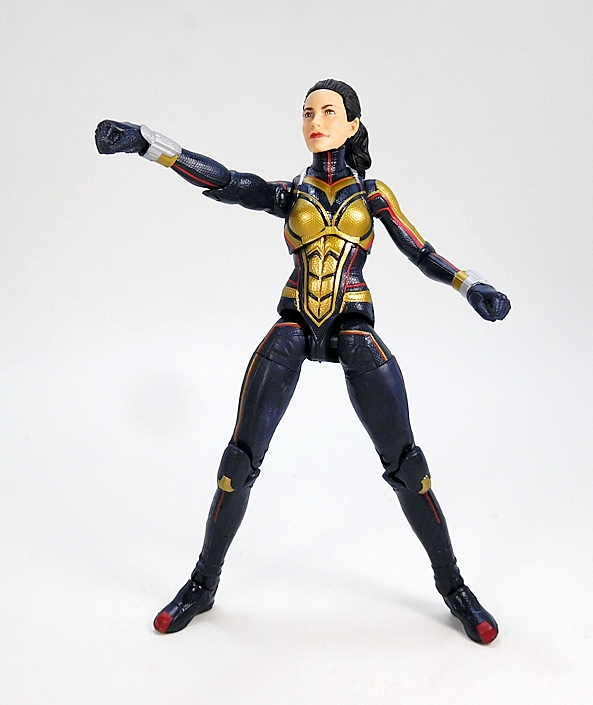 The articulation is mostly good. My usual issue holds true for the Legends ladies and Hasbro’s choice of articulation for the arms. The rotating ball joints in the shoulders and elbows sounds fine, but the range of movement in the elbows is disappointing. I can barely get a full 90-degrees out of those elbows. The wrists are on hinged pegs, to allow the hands to be swapped from fists to flying hands with the fingers held tightly together. The legs have ball joints in the hips, double hinges in the knees, swivels in the thighs, and hinges in the ankles. It doesn’t feel like she’s got lateral rockers in the ankles, but if she does, mine just don’t want to move that way. Lastly, there’s a ball joint under the chest, and she has both a hinge and ball joint in the neck. 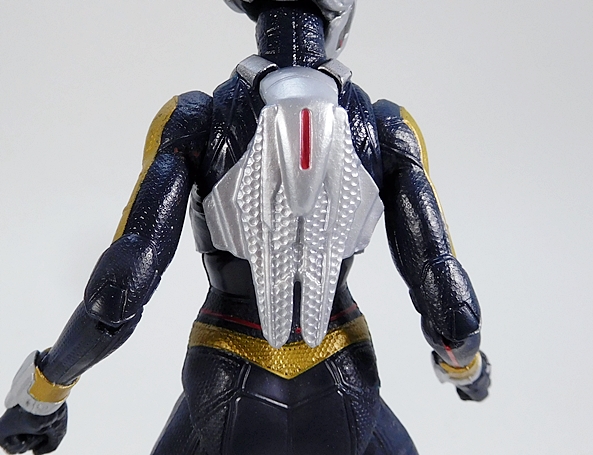 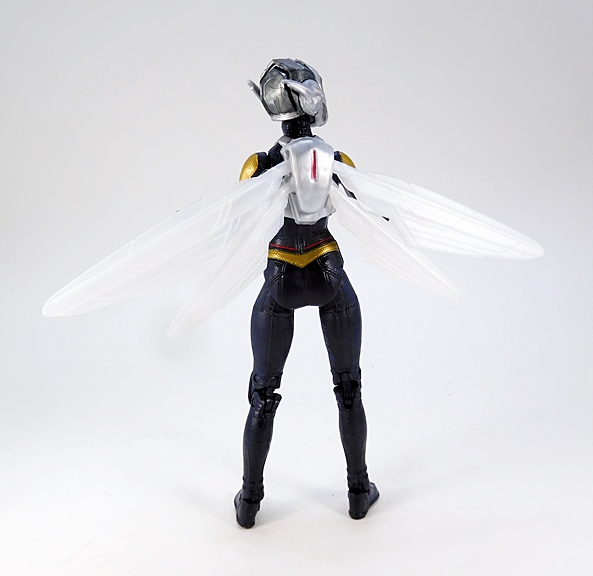 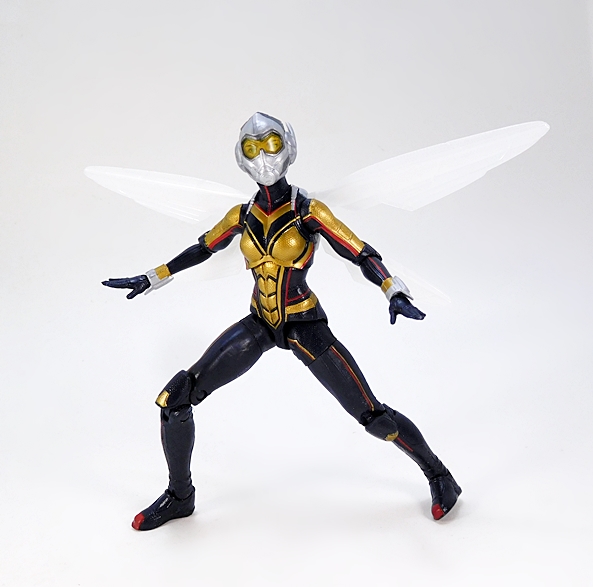 Deploying Wasp’s wings is as easy as pulling off the backpack and pegging in the wing assembly. I think the backpack is sculpted to make it look like the wings are retracted but still showing a bit. If that’s the case it’s not that convincing, mainly because of the color difference, but swapping out the backpacks works well enough. The wings are cast in a frosted translucent plastic, which makes for a nice effect, but can be a little tough to see against a white backdrop. I think it would have been cool if they could have worked some kind of shimmery effect in there. 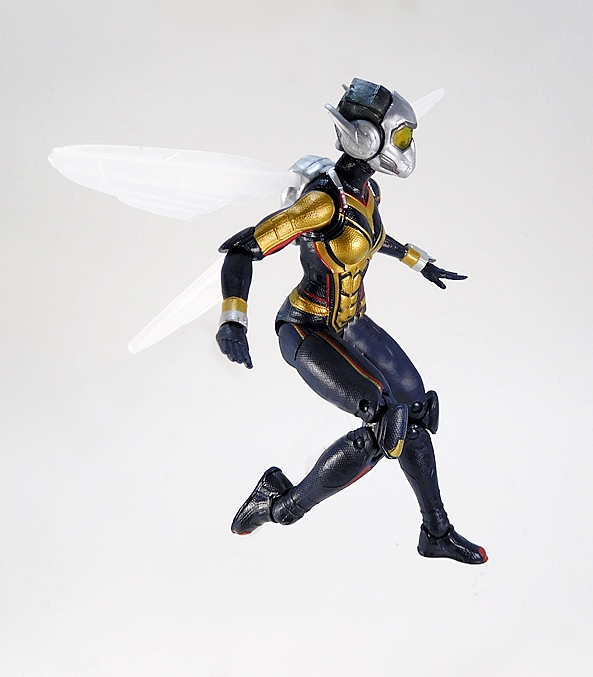 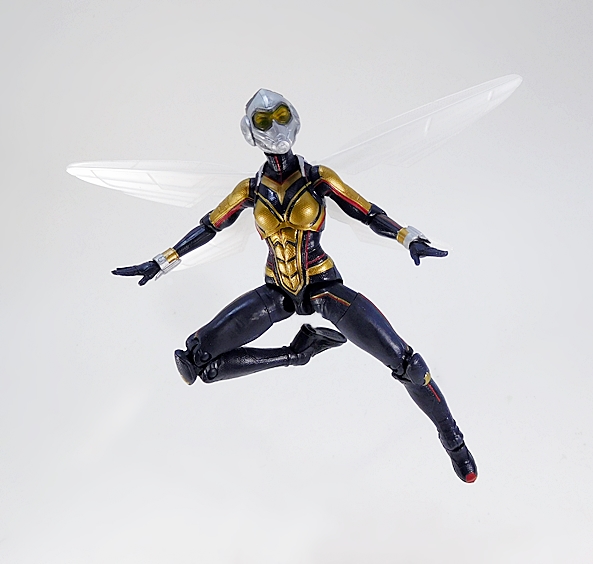 There also isn’t as much range of motion in the wings as we saw in the comic-based Janet Van Dyne from a bunch of waves back. Still, the wings are a whole lot of fun. They sure look nice and they hold onto the figure quite securely. 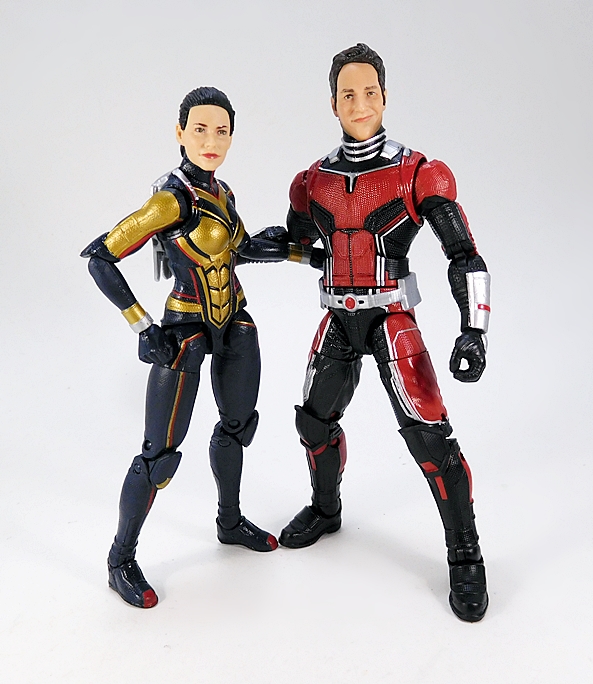 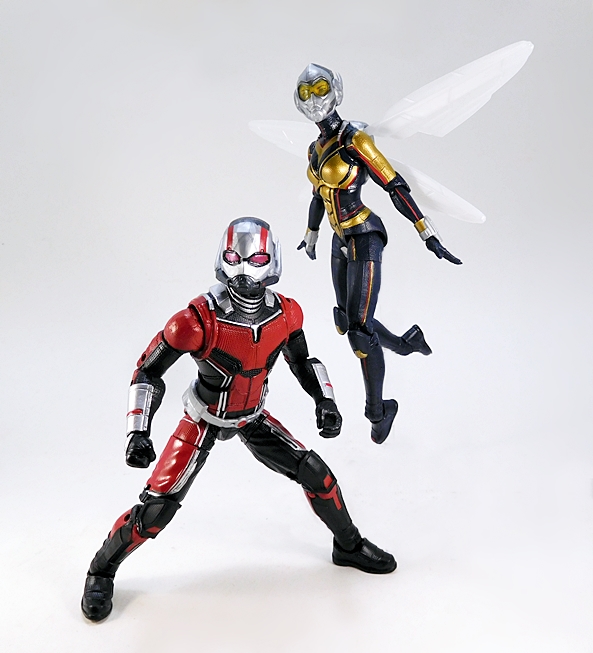 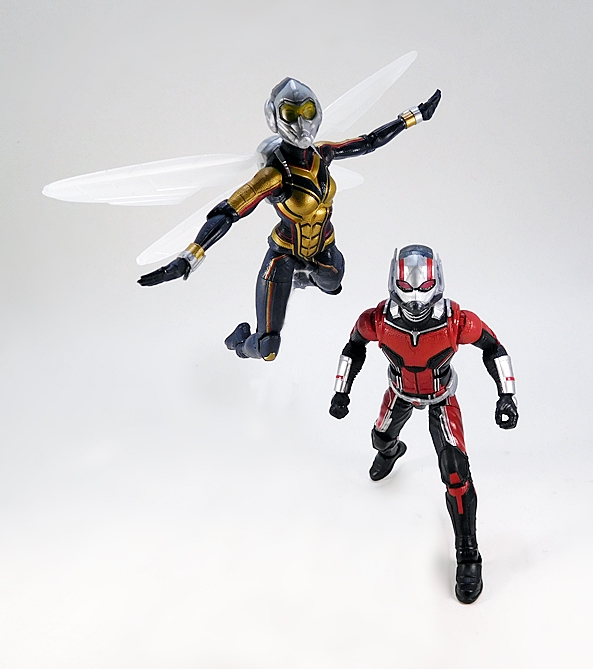 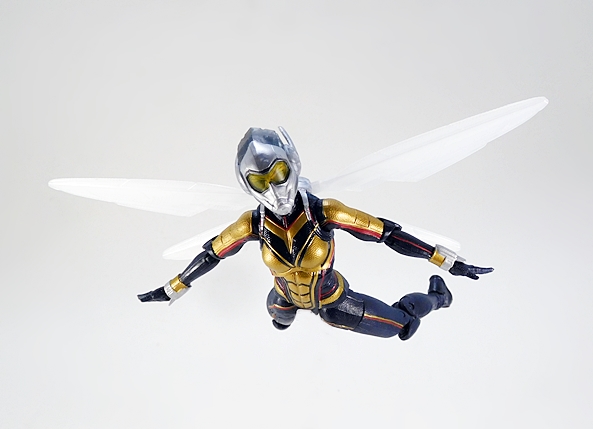 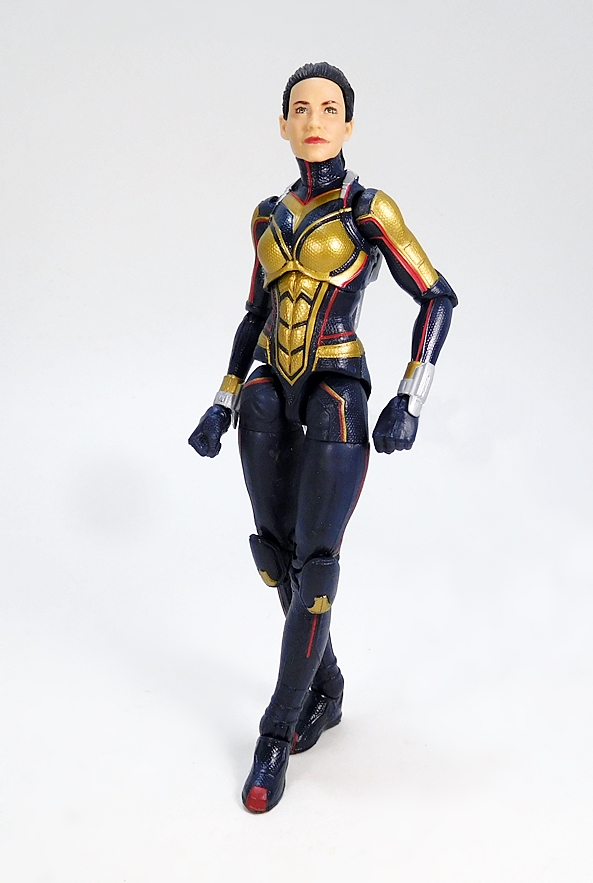 With there now being no less than four MCU versions of Scott Lang in the Marvel Legends lineup, it’s great to finally see The Wasp in action on the big screen and have a figure as well. Hasbro did a solid job on this release and I’m interested to see what the future holds for Hope Van Dyne as the MCU continues to unfold. As a footnote… I got in a couple Marvel Legends boxed two-packs last week, so I’ve decided to go All Marvel, All Week! So I can have a look at those without interrupting my usual Marvel Mondays. So on Wednesday I’ll be checking out the Marvel Studios “First Ten Years” Captain America and Crossbones set, and then we’ll bring it on back home on Friday with a look at the Ant-Man and Stinger set.