Even if I wasn’t gobsmacked by almost every Marvel movie that’s come out, I’d still have to respect what Marvel Studios (and Disney) has managed to accomplish with their cinematic universe. Ten years worth of movies all set in motion to culminate in a massive team up. It seems like a sure thing now, but if you go back to the beginning, to the original Iron Man film, nothing was guaranteed and crazy risks were taken. And now, in a market where a Goliath-like Disney is even pulling back on the reigns of the Star Wars franchise, Marvels flicks continue to put asses in the seats to the tune of about $12 Billion total. Hell, even Ant-Man and The Wasp opened with respectable numbers and beat the previous release. And if you think that $12 Billion is a lot of cheddar, now imagine how much the merchandising has raked in, because silly middle aged nerds like me buy toys!

And that brings me to my first two figures from Hasbro’s First Ten Years releases. These Marvel Legends figures are culled from the various films of the MCU and some of these figures are long overdue. Today I’m having a look at Cap and Crossbones from Captain America: Civil War. I’ve wanted a figure of the MCU’s Brock Rumlow as Crossbones ever since the movie was out. Hot Toys teased one and then decided against releasing him, but I’ll happily take Hasbro’s Legends version as a consolation prize. The figures come in a collector friendly window box with a Marvel Studios: The First Ten Years logo as well as Captain America: Civil War. The box here is also squared off at the edges, distinguishing it from the packaging used for the regular Legends two-packs and I like it a lot. It just looks spiffy and new. Let’s start with Captain America!

Do you enjoy buying a figure you already have to get one you don’t? Me neither. And that’s sort of the case here, so I’m not going to spend a lot of time with this figure. From the neck down, I can’t see any difference between this figure and the Civil War Cap that we got as part of the Giant-Man Wave. And I’m pretty sure that figure was just a repaint of the Cap from Age of Ultron. I said back then that I preferred the brighter blue on the AoU Cap over the darker costume here, but to be honest this one has grown on me quite a bit. I’ll spare you a run through of articulation as you can just link back to either of those reviews to get the lowdown. 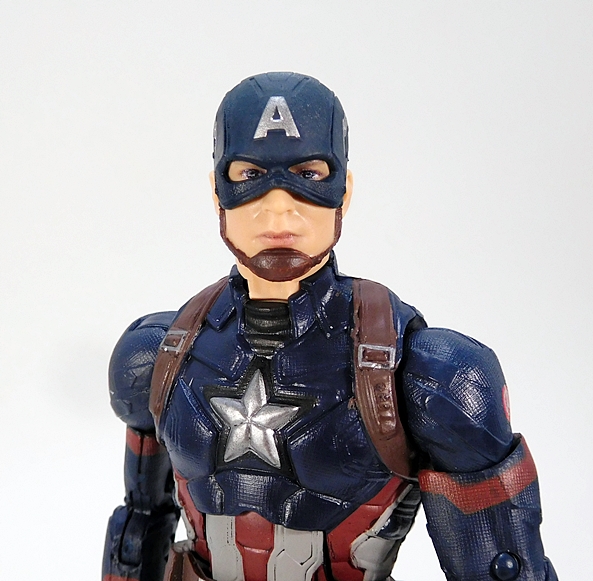 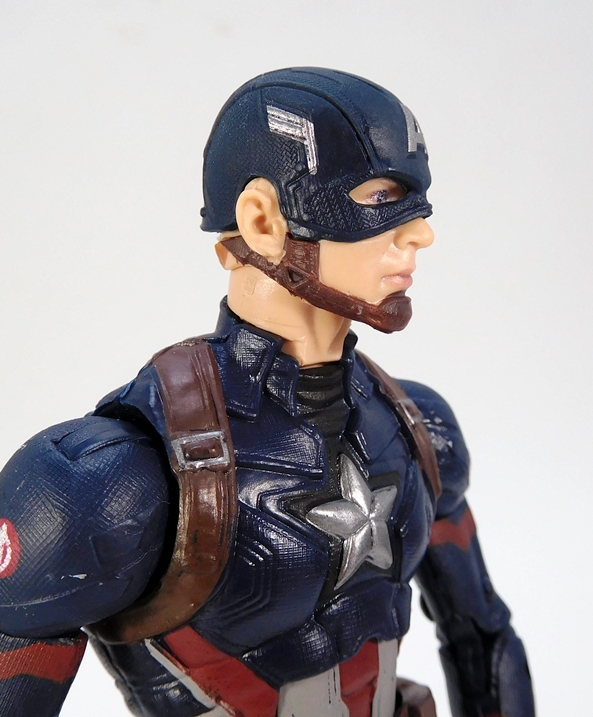 That’s not to say this figure is entirely recycled. For starters, you get a pair of much improved heads. From straight on, I think the masked head is fantastic, but from the side, there’s some weird shit going on over the ears. There’s no hairline showing, so it kind of looks like he’s bald. The helmet is sculpted separately and it just doesn’t fit all that well, so you get some gaps around the back too. 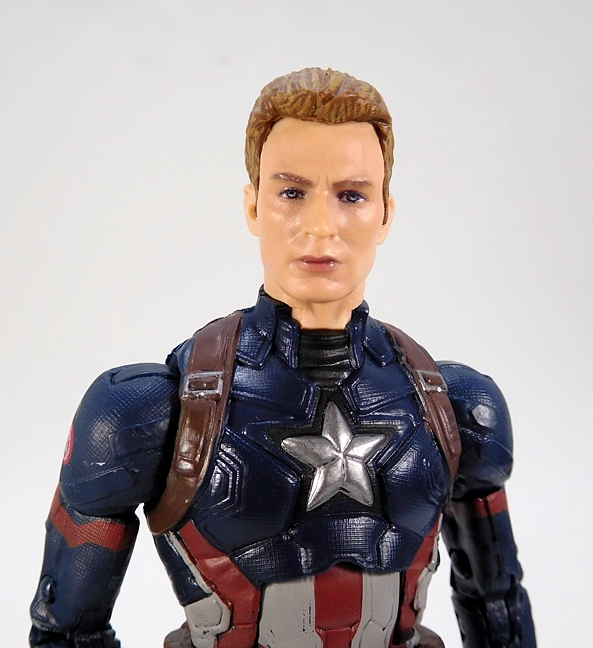 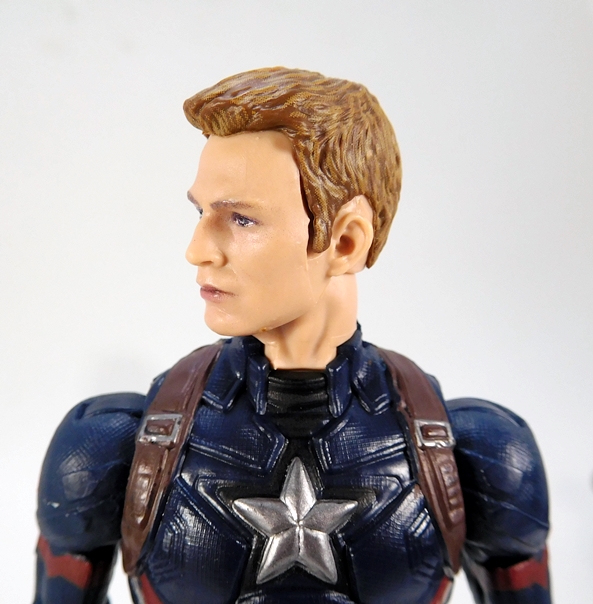 There’s a similar thing going on with the unmasked head. When viewed from straight on I think it’s the best MCU Steve Rogers likeness we’ve seen in this scale. A profile view, however, shows that the hair is sculpted separately and it’s not a perfect fit. You get that same weird gap over the ears that doesn’t look natural and a gap around the sideburns where the hair doesn’t fit flush with the head. It’s kind of a shame because everything else here is done so damn well.

The shield is also different than the one that came with the previous Civil War Cap release. This one has a more vibrant and premium paint job and a segmented star in the center. It also features the realistic straps on the reverse side, which work much better than the hinge clip and peg affair we’ve seen so many times. The only disadvantage here is you can’t secure it to his back. All in all, this is a great figure and probably the best Legends MCU Cap Hasbro has released, so I’m not so bummed about having to buy this version again. OK, so enough about Cap, let’s get to the real reason I bought this set. 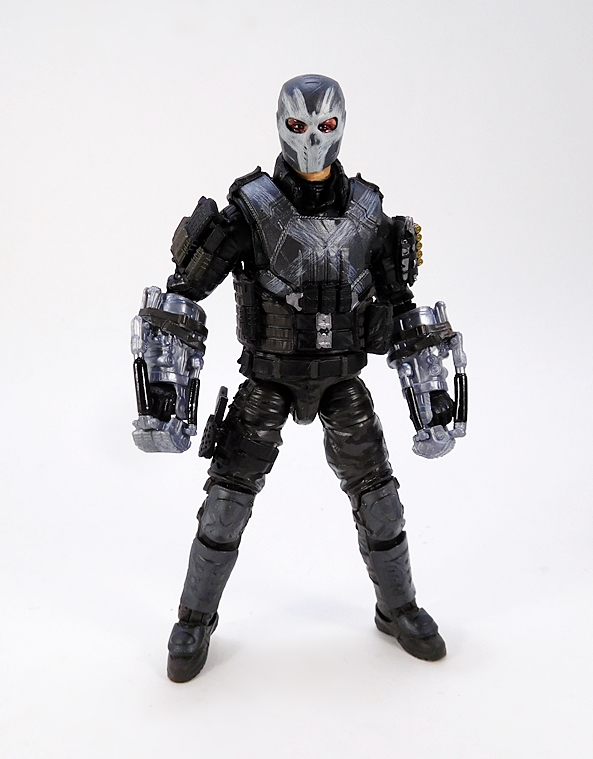 Crossbones’ screen time in Civil War was brief, but oh boy was it glorious. The rogue SHIELD agent’s scrap with Cap was a great way to kick things off and I loved his costume. I think the folks at Hasbro did too, because they sure poured the love into this figure. The detail on this guy is absolutely fantastic. The tactical vest is sculpted separately from soft plastic and worn over the buck with a white X scratched into it with what looks like pure rage. All of the straps and clasps are sculpted down to the finest details, as well as the various little pouches, and the texturing on his belt.

Other highlights include his Glock 17 pistol with molded holster on his right hip, which sadly is not removable…

And on his left shoulder he has a brace of shotgun shells and what I believe are supposed to be tools for tuning up his hydraulic fists. One of them sure looks like a socket wrench. Whatever the case, the attention to detail is fantastic, and I’m especially impressed by the silver and brass paint hits here. Great work!

Rumlow comes with two heads, one masked and one without. The masked head is the one I’ll be using most of the time and it turned out quite nice. The white scratches on the mask that make up the skull motif are applied with the new half-tone printing techniques. What really impresses me here is the definition between the mask and what’s exposed through the eye-holes. It really looks like they sculpted a separate mask and attached it to the head. It’s not only the depth of sculpt that works so well here, but also the paint apps applied around the eyes showing the scar tissue. 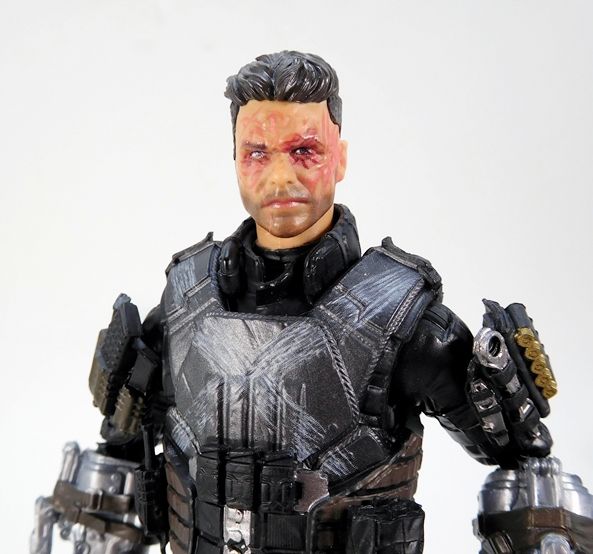 The unmasked head is no slouch either. It’s not a perfect likeness to Frank Grillo, but he is supposed to be horribly scarred up. The hair is nicely sculpted and I really like the way the printing on his five o’clock shadow came out. I don’t know how much work it is to get likeness rights from someone like Grillo, but I think it’s really cool that Hasbro went the extra mile just to include the bonus head with this figure.

The articulation here is identical to Cap’s so I’m not going to run through all the details. I will, however, point out that the arm rigs are removable. These are sculpted in a fairly soft plastic, so the sculpted detail isn’t as sharp as it could have been, but there’s still plenty to appreciate in them. I especially like the DIY-stylings of the sculpted belts that are wrapped around them and holding them together. 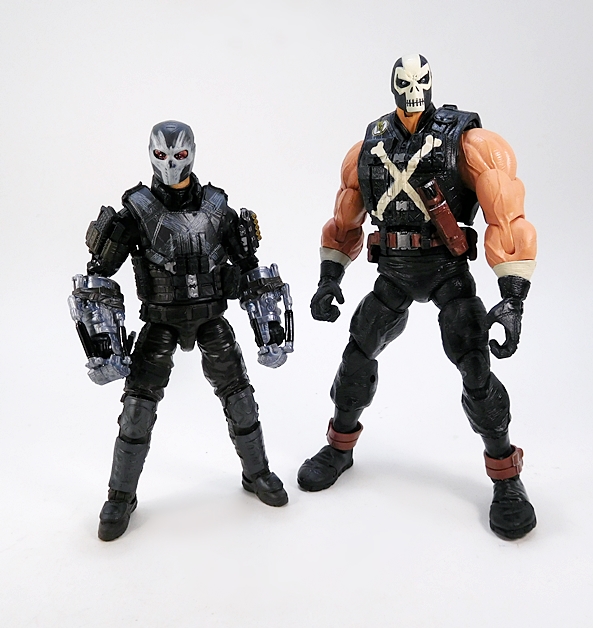 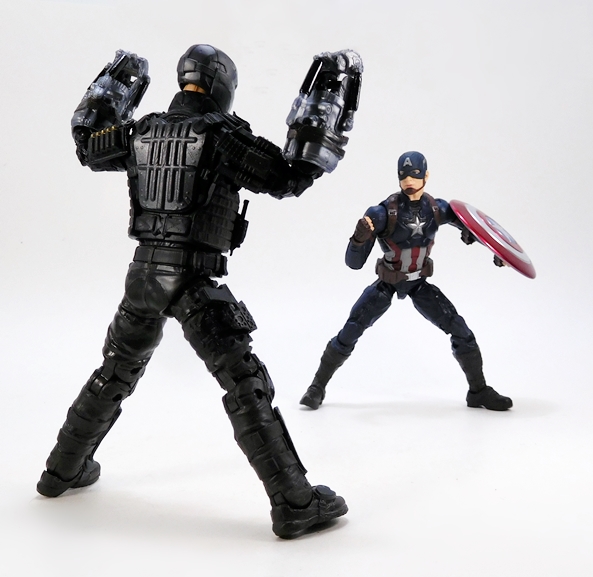 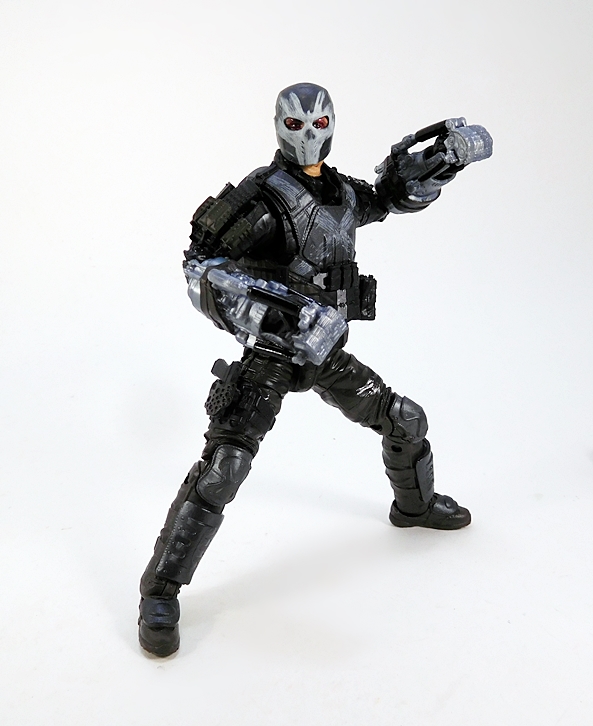 Overall I’m very pleased with my first Marvel Studios: The First Ten Years set. Even though this tweaked version of Captain America turned out to be a welcome addition, I was in this set for Crossbones, and I am not disappointed. Quite the contrary, if this is the kind of effort Hasbro is putting into these First Ten Years figures, I’m pretty excited to pick up some more. I grabbed this one at Hasbrotoyshop for $40 and I think it was money well spent! Come back on Friday and I’ll wrap up this Marvel week with a look at Ant-Man and Stinger.