It seems like all I’ve been doing this week is working and sleeping, but the weekend is here and I’m going to ease into it by taking some time to enjoy myself and open up a brand new Transformer! It’s been a while again since my last Transformers reviews, but I had some other things I wanted to get caught up on. That’s all done and now I’m ready to continue my look at the Power of the Primes Terrorcons. I should be able to stick with Transformers on Fridays at least for the next few weeks. A while back I reviewed Rippernsapper and today I’m opening up Cutthroat!

I don’t have much new to say about the packaging, except that I really dig the character art on the card. Cutthroat is shown in his beast mode and looking mighty fine. I’ll also toss out there how surprised and pleased I am that Hasbro can still get away with using the name Cutthroat on a children’s toy. Yeah, it has other, less violent, meanings, but it’s still a word that conjures up a pretty grisly imagine in my mind. I’d like to think this Terrorcon got his name not because he drives a hard bargain, but rather because he literally slices people’s throats with the sharpened edges of his metal wings. When I looked at Rippersnapper, I started with his robot mode, so let’s keep that trend going for the rest of the Terrorcons…

When I first glanced at pictures of Cutthroat I wrote him off as a quick-and-dirty recycling of Swoop. Getting him in hand tells a whole different story. There are certainly similarities, but so much of this guy has been completely reworked that the resemblances are fleeting. The arms and upper legs are the same, the torso has a similar shape, the combiner port is still buried in the back, and both bots wear their beast heads on their chest and their wings on behind their shoulders. But what impresses me is how much re-sculpting Hasbro did here. The wings are completely redone, as is the detail work on the torso. The lower legs are completely new as well. His profile may be similar, but Cutthroat is bulkier and decidedly less sleek. 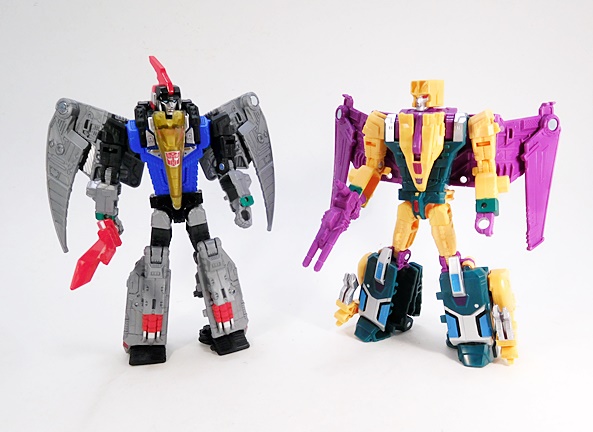 He’s a damn clean looking robot from behind too, and you have a few different options on how you can position his wings. The deco on this figure is pretty out there, but it’s certainly faithful to the original toy. You get some dark green in the torso and lower legs, some purple in the wings, hands, and around the neck and chest, and yellow in the arms, upper legs, bird legs, and “helmet.” These are not colors that I would think to put together, but I can’t say as I hate it. Little extras like the silver and blue paint hits on the legs and silver up near the shoulders make for a nice touch.

I like the head design a lot, but it doesn’t scream Cutthroat to me. With that having been said, the yellow “helmet” looks great and the silver face and red eyes are both sharp and snappy. He’s got a bit of a grim expression, maybe a little pissed off, but he’s not quite selling me on being a vicious Terrorcon.

Cutthroat comes with two accessories, but only one of them really matters to me and that’s his gun. It’s a compact double-barreled rifle, which is a pretty good update to his original G1 weapon and he can hold it in either hand. 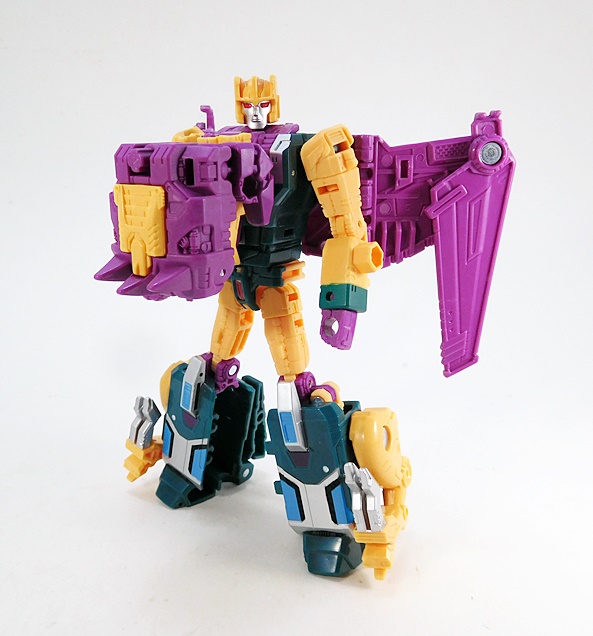 The other piece is his Prime Armor, which attaches to each side of the bird head on his chest and has a compartment to put a Prime Master figure in there if you like your robots with ridiculously beefy chests. I’d toss it away, but it doubles as a hand for Abominus, so I guess I’ll need it when I eventually combine these guys. 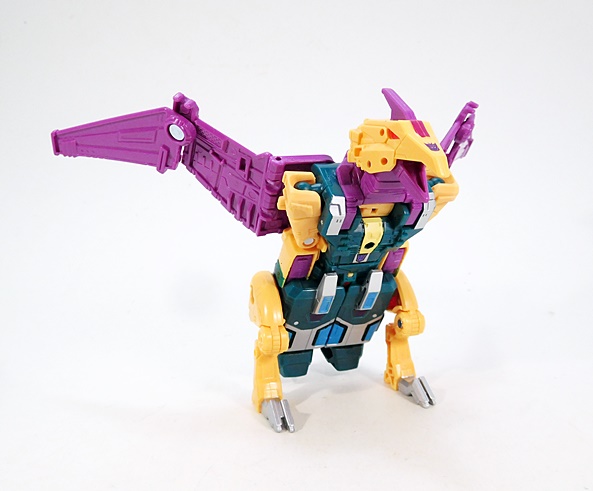 Cutthroat transforms into some kind of monster bird and once again I’m pleased by the way he sets himself apart from the Swoop mold. The beast head still folds up over the robot head and the arms still fold in at the sides, but instead of folding up onto the back, the legs just collapse to make a longer body. From the front he’s got mostly bird stuff going on, but the stubby tail in the back looks decidedly more reptilian. He has a notch on his back where you can stow his gun between his wings and it looks like it could still serve as a functional weapon for his beast mode. 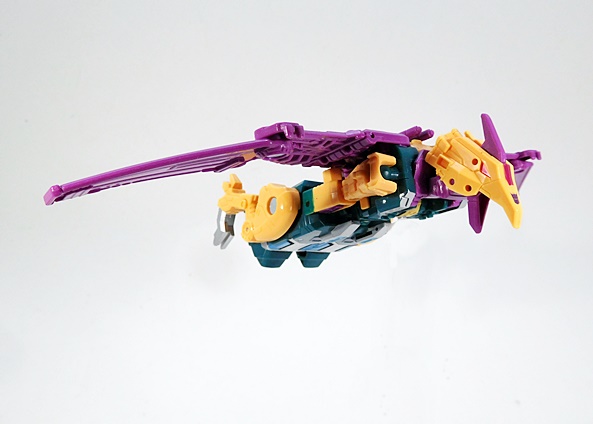 The colors here are more or less the same as in his robot mode. As for articulation, you get ball joints where the legs meet the body and hinges about halfway down. The wings are hinged at the body so they can flap and hinged again about a third of the way in so they can close up or spread out. The mouth is hinged, but the neck can only look up so far, which isn’t always the best for flying poses, but it works fine for when he’s just standing around.

I mentioned in my Rippersnapper review that these will be the first versions of the Terrorcons that I’ve ever owned and so far I’m enjoying the hell out of them. Cutthroat is a great looking figure and he’s loads of fun to play around with. I love when Hasbro takes the old basic-sized G1 toys and beefs them up to Deluxes. It really fleshes out all new possibilities for these characters. Next week, I’ll tear open another of the Deluxes, because I’m anxious to get through these guys and combine them to form Abominus!