It’s Friday again, Toyhounds, and I’m more than ready for the weekend. I’ve clawed my way through another hellacious work week and now it’s time to reward myself by opening up a brand new Robochangeformer. I’ve spent the last five weeks or so checking out the four Deluxe Terrorcons and that just leaves their leader, the mighty Hun-Gurrr. Let’s see if I can make it through the whole review without messing up the number of r’s at the end of his name, eh?

As the leader of the Terrorcon Combiner team, Hun-Gurrr is a Voyager Class and comes in a pretty standard Voyager Class window box.  He’s packaged in his robot mode, and you get some fantastic artwork of his double-headed beast mode on the front with epic sparks behind him and green flame shooting out of one of his mouths. It’s all very metal. The package is collector friendly, but be sure to have some snippers handy to cut all those plastic ties that are holding him into the tray. Let’s jump right in and check out his robot mode…

Hun-Gurrr’s robot mode takes the basic elements of the G1 toy and adds plenty of polish to make for a more stylized and all around better looking bot. The shoulders are a bit less pronounced and the legs are less blocky and a lot more interesting too. But the biggest improvement for me is the chest. The beast mode’s tail forms the middle of the torso, and I think it’s very reminiscent of the way some Decepticon jets wear their cockpit on their chests. Very cool! And while I do indeed like this robot mode well enough, I can’t help admit that the proportions are off. His arms and upper body look incredibly bulky when compared to his rather diminutive legs. It looks like a lot of weight for those chopsticks to handle, and his feet seem even smaller still! Now, it’s not a deal-breaker for me by any means, but I think the disconnect between his upper and lower half keeps him from being a top-shelf design. 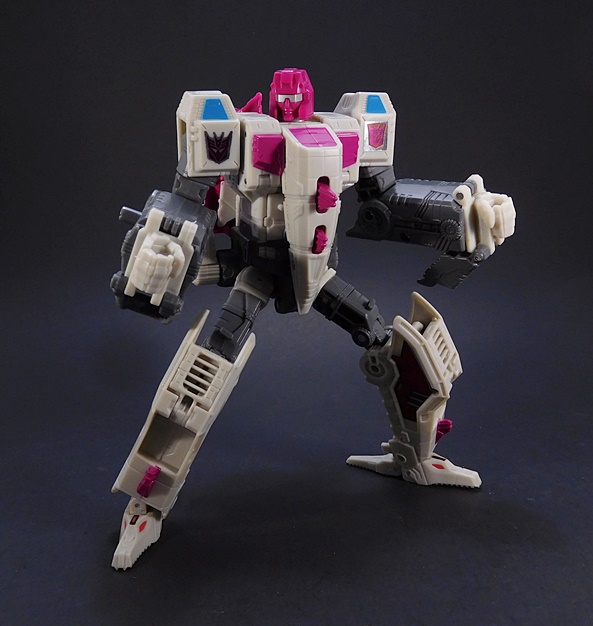 From the back, Hun-Gurrr looks pretty good. He does have a boxy, but manageable, backpack, which is made up from the collapsed chest piece of his torso mode. He’s got some hollow leg syndrome going on, but I love how the lower jaws of the beast mode heads form heel spurs to keep him stable. And so while those feet are kind of puny, they do a fine job of keeping this bot upright. One more thing that I’m not all that fond of here is the way the beast feet hang off the backs of his forearms without really locking into place. It’s not uncommon for these to be flapping in the breeze while I’m posing this guy. A couple of clips would have worked wonders there. As for the deco, well it’s mostly faithful to the original toy with a muted combination of off-white and dark gray with some pinkish accents. We also get some metallic blue paint hits on the shoulders and foil stickers on the sides of his lower legs, that really make things pop. Finally, Hun-Gurrr features a foil Decepticon insignia sticker on each shoulder, with the left one being a rub sign.

Hun-Gurrr’s head sculpt is a decent nod back to the original toy’s portrait. The only thing painted here is his silver visor, the rest is left as bare pink plastic. The face has sunken cheeks and is rather angular with a pronounced chin and nose. The facial features are a little soft, and it’s not one of my favorite head sculpts in this assortment, but I still like it well enough. 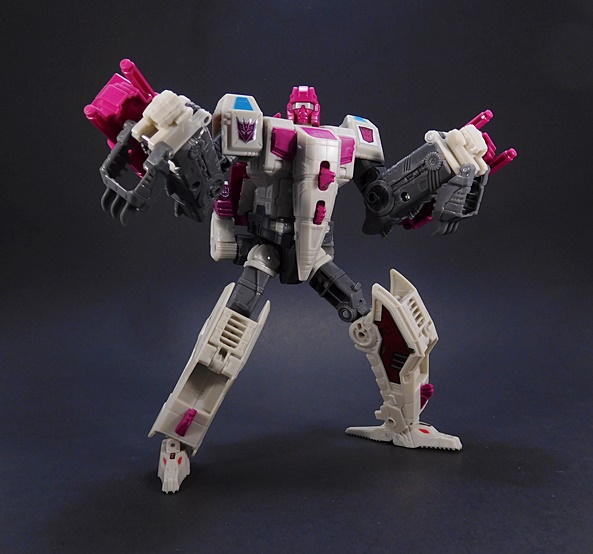 Sadly, Hun-Gurrr doesn’t come with a rifle, but he does come with two Prime Armor pieces (also serving as Abominus’ feet), which can attach to his arms to form double blasters. I do like these pieces, but they add to his already bulky upper body. They also have a slot to plug in the Terrorcon Enigma and one other Prime Master, if you’re into that kind of thing. All in all, these work well as weapons, but I would have preferred a rifle. Let’s move on to the beast mode!

Hun-Gurrr’s alt mode is a four-legged wingless dragon thing and… hey… we’ve seen this before. Yup, this is extremely similar to Sinnertwin’s alt mode and I always thought it was weird having two such similar cyber-beasties on the same team. Still, between the larger size, vastly different deco, and skewed proportions, I think the two are distinctive enough from each other to make it work. Sinnertwin kept a fair balance between body and heads, whereas Hun-Gurrr’s necks and heads really dominate.

That’s not to say I’m totally in love with this alt mode. When you know what you’re looking at, it should be pretty obvious that it’s more or less the robot mode standing on his hands with his legs up in the air. The biggest issue I have is that the design doesn’t do anything to hide the robot mode’s pelvic area. Plus, the tiny, atrophied front legs just look weird to me. Still, the beast heads are a lot more fun on this mode than what we got on Sinnertwin and knowing that this design is in effect a triple changer with a torso mode, I’m willing to forgive a lot. 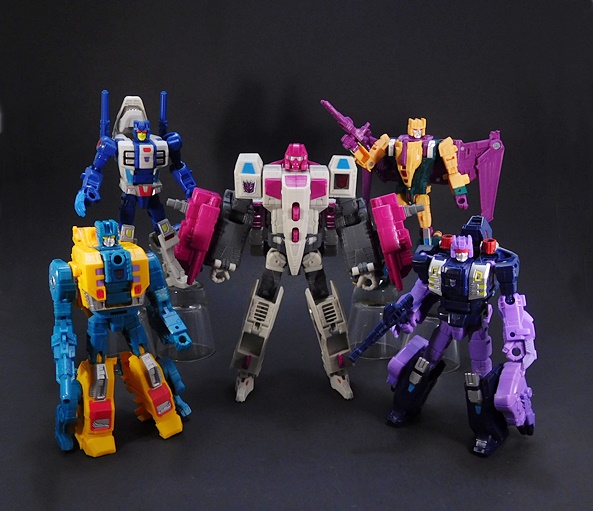 Hun-Gurrr rounds out the Terrorcon package pretty nicely. To me, he isn’t the high point of this team, but considering how much I’ve loved these figures, that’s not something to be ashamed of. He’s still a very good figure and a whole lot of fun. And that seems to be a running theme with Hasbro these days. The Deluxe Class figures have been mostly excellent while the Voyager Class figures have ranged from solid to underwhelming. Of course, I still have one more thing left to look at before I’m finished with the Terrorcons, so come on back sometime tomorrow and I’ll combine them to form… ABOMINUS!!!