I was supposed to wrap up my look at Super7’s second wave of Collector’s Choice figures weeks ago, but I got sidetracked by Halloween content and I’m only now getting to open the last figure in the wave. Anyway, today’s figure is Karg and he’s special because he’s one of a handful of figures based off the 1987 Masters of the Universe film. Matty gave us Blade and Saurod, and now Super7’s addition of Karg nearly rounds out the quartet of baddies pretty well with only Beastman still out of the picture. Although I shudder to think what I would give up to get a Skeletor and Evil-Lyn from this flick. Young Meg Foster… Yum!

The packaging is right in line with what we were getting from Matty for all those years. And speaking of all those years, there’s a nice Tenth Anniversary logo on this one, celebrating the line from 2010-2018. That’s a long time! No wonder I have so many boxes of these figures! Karg’s tagline labels him as the “Evil Inquisitor With A Horrible Hook” which I presume makes him Skeletor’s chief torturer and that’s some pretty harsh shit for kids toy line. The back shows a spread of figures from Super7’s two most recent waves and you get a bio on the back that works Karg into the mainstream Masters Classics canon. 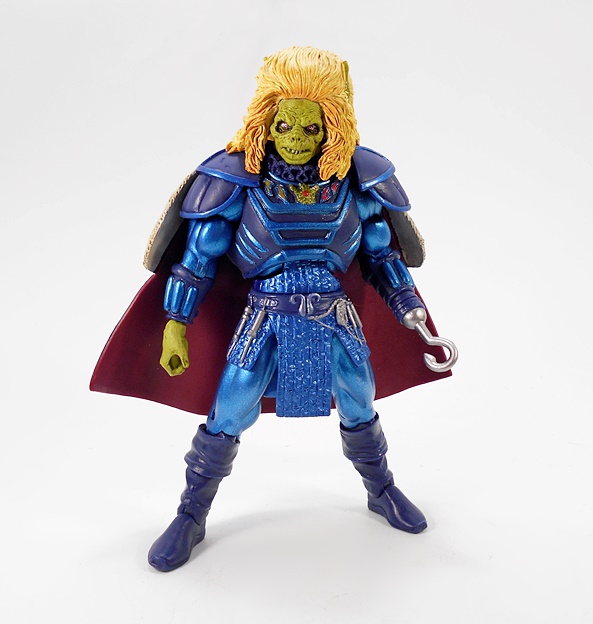 Here he is out of the package and I’ll go ahead and say it: Super7 did a nice job recreating the costume from the film, at least in terms of the sculpt. It’s not 100%, probably due to copyright issues, but the influences are certainly there. The chest and shoulder armor are comprised of one piece, sculpted in soft plastic, and permanently attached to the buck. There are some nice details around his gorget and under the armor he has a quilted tunic that hangs below his waist and is belted in place. They even recreated that distinctive horn-like emblem for his belt buckle. Sculpted onto his belt are various tools hanging down, which I would imagine are some kind of torture instruments. Below that you get some smooth leggings and buccaneer-style boots. The coloring here, on the other hand, is a big departure from his on screen look. The figure eschews the browns, coppers, and golds of the big screen costume for a metallic blue deco. It may not jibe in terms of screen accuracy, but I do like it a lot. Hell, I actually prefer it. I like my MOTUC figures crazy and flashy, and this beautiful paint job is certainly delivers that and with a gorgeous paint job. The metallic blue is exceptional and I like the silver detailing on the tools. 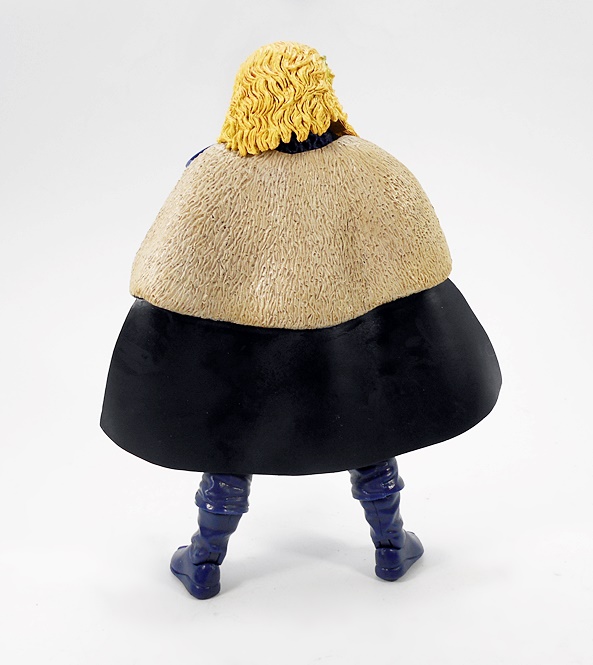 If there’s one thing here that I’m not too crazy about it’s his cape. It’s extremely wide, and while the sculpted woolly pattern on the top half is well done, it just doesn’t look all that great from the back. I wish it was removable, but it’s permanently attached to the chest armor. At least I don’t mind it so much when viewed from the front.

As for the head sculpt? Well, it’s a work of art. Karg’s mask was an impressive piece of work in the film and this figure captures that look very well. The skin tone has been changed up to green, but the sculpt itself is as faithful as I could want. From the wrinkled skin to the somewhat porcine nose, everything just looks great. I especially dig the sunken eyes and the very distinctive paint used for the eyes themselves. The hair isn’t quite as poofy as movie Karg’s white coif, and it’s been re-colored to yellow. I’m fine with that and I like how you can see his very alien-looking ears peeking out through the hair. Oh yeah, and he has an Elizabethan Collar around his neck! As many times as I’ve watched that movie, I never noticed it until seeing it on this figure and comparing it with stills from the flick.

I’ve yet to mention one of Karg’s most distinguishing features, and that’s the “Horrible Hook” that he has grafted onto his left arm. It’s your standard pirate hook and it does swivel at the base and have a slightly barbed end to it. My only little gripe here is that the hook had a much cooler design to it on the early prototype. It’s a pity they changed it for the final product.

Karg comes with two accessories, the first of which is the delightfully named Dagger of Agony. It actually looks like it might supposed to be an energy blade of some kind, but I don’t really know anything about it. As far as accessories go, it’s OK, but I think the design is a little dull and certainly doesn’t live up to its foreboding name. 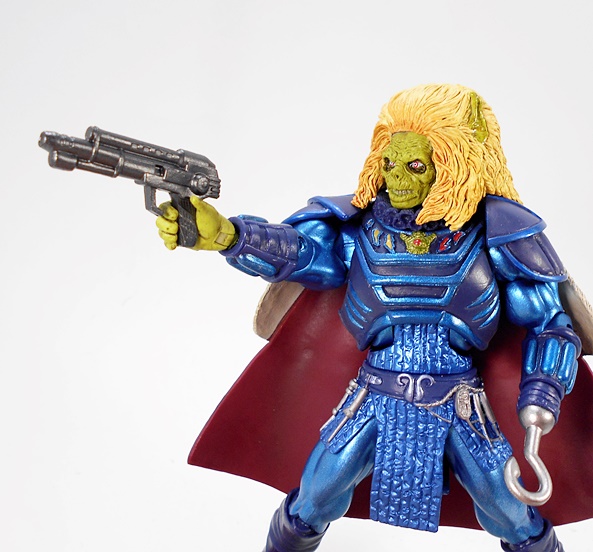 Second, you get this pretty cool laser blaster. It’s got a bit of a Star Wars vibe to it and I can certainly get behind that! I’ll definitely be displaying him with this over the dagger. 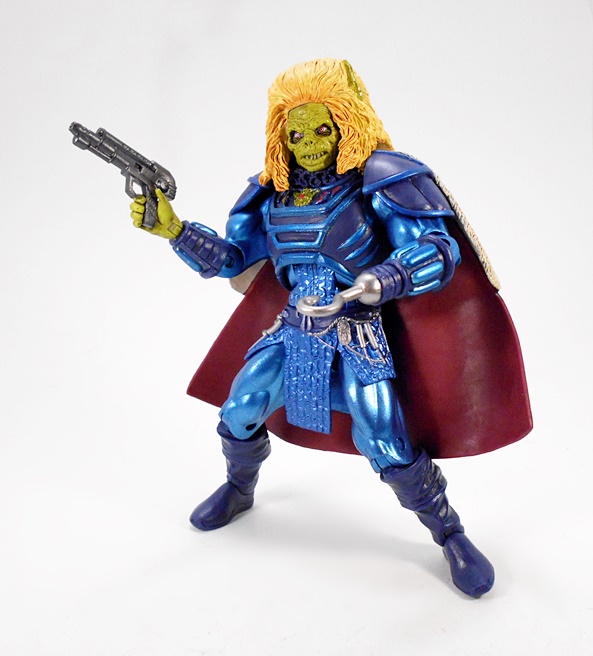 In case you can’t tell, I really love this figure. It’s not only great that Super7 was able to get us one more original character from the ’87 movie, but I think Karg is a wonderful addition to Skeletor’s Minions. This figure represents some superb sculpting and excellent paintwork. Is there a downside? Well, Super7 have opened the pre-orders for their third wave of Filmation Style figures, but I haven’t seen any word on a third wave of Collector’s Choice figures. These new characters have been my main focus, and it would be a shame if we didn’t get any more of them.

One comment on “Masters of the Universe Classics: Karg by Super7”