After a few diversions, I’m back to spending Marvel Monday digging into my pile of unopened Marvel Legends. Although, today’s figure isn’t random, I actually picked it because I want to complete one more wave before the end of the year, and with two figures left to open in the Cull Obsidian Wave, that’s the one I’m going with. I also thought it would be fun to go with Black Knight, because I’ve been devoting one slot a day to opening Mythic Legions. So what do we call today’s figure? Marvel Legions? Mythic Legends? Whatever, the point is it’s Marvel’s Black Knight!

Here he is in the box, and with only Malekith left to open, Black Knight is the penultimate figure in this wave for me. He’s also one of those characters that I only recall encountering a few times in my 35 years or so of Marvel comic reading. I know he’s been around in one form or another since forever and it’s been about that long since I remember seeing him in my funnybooks. If anyone knows a good run for us to get introduced, please feel free to lay it on me.

And for a character I simply don’t know all that well, I have to say that I dig the look of this figure a lot. Hasbro took the torso, arms and legs right off of Green Goblin and Hobgoblin, which makes perfect sense because of the excellent chain-mail sculpt on the limbs. I was surprised to see that they didn’t recycle the gauntlets or buccaneer boots. I mean, I wasn’t expecting them to use the curled toe boots, but it seems like they could have cheaped out and recycled a lot more if they wanted to. Whatever the case, it all works well for the medieval knight motif. It kind of gives him that vintage Prince Valiant flavor that hints at just how far back the character goes. The tabard is achieved with a painted torso and a separate sculpted belt piece that hangs down below the waist and is pretty convincing as all being part one garment. The belt is 100% comic, though, with a monstrously large belt buckle and enough sculpted pouches to make Deadpool jelly.

The coloring here is fairly dark, but nicely done. I really dig the silver and gun-metal blue they used for the chain-mail. The gauntlets and boots are both matte black and there’s some red striping around the edges of the gauntlets, as well as the arm holes in the tabard. He also features a red flying eagle emblem on his chest. The belt is brown with some dull bronze paint for the buckle, but unfortunately there’s no paint on the pouch snaps.

The cape attaches via a peg in the back and hangs off the shoulders, so it doesn’t impede articulation much, but you can easily take it off for the more action-packed poses. 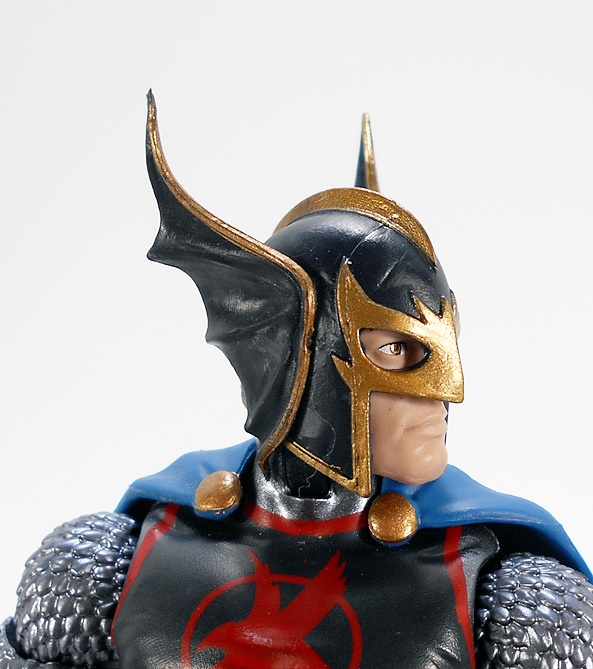 You get three different heads to choose from, each designed to offer a different one of his looks. The stock head features a helmet that covers the nose and leaves the lower half of the face exposed. It’s got some nice gold paint and the way it’s sculpted makes it almost look like it could be removed, even though it can’t. I dig the wings on the sides as well. This is easily the character’s look that is most familiar to me.

The next head features a classic Great Helm with a similar black and gold coloring. This one isn’t as convincing as a real helmet, since the eye holes are shallow and just painted over in black. I do like the eagle crest on the top, though. It’s cast in a soft plastic and looks great. 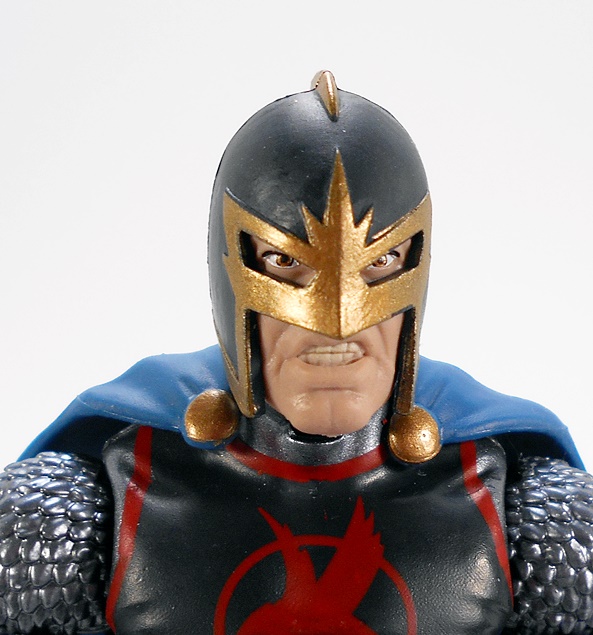 Finally, you get a noggin that looks like it’s probably meant to be for villain version of Black Knight. I’m not as big a fan of this one. The head sculpt is actually quite good, but the helmet itself reminds me of a Nova Corps helmet (as well as Captain Britain’s!) a bit too much. Still, not bad at all.

Black Knight comes with his trusty sword, The Ebony Blade. It would have been damn cool to get his photonic blade sword as well. I suppose I could always steal the one off of Taskmaster. Anyway, the sword is a nice sculpt with an elongated two-hand grip, and there’s a slot on the belt for him to wear it. The hand sculpts they went with for him aren’t perfectly suited to holding the sword. The left hand works best, and while he can hold it in the right hand, the grip is somewhat loose. He can also wield the sword with both hands. 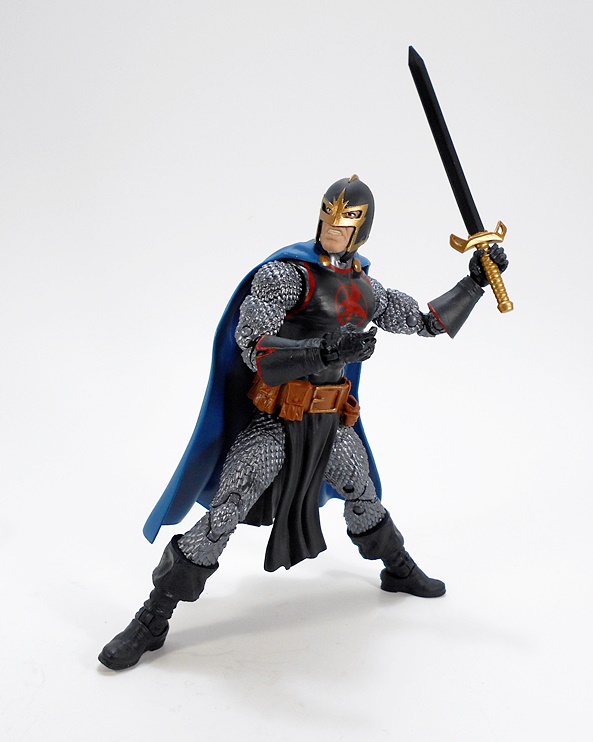 The articulation here has all the right points, and rather than go through them all, I’ll just refer you back to either the Green Goblin or Hobgoblin reviews. The problem here is that he’s got some seriously gummy hinges in those elbows, which can be a bit of a drag when playing around with him. 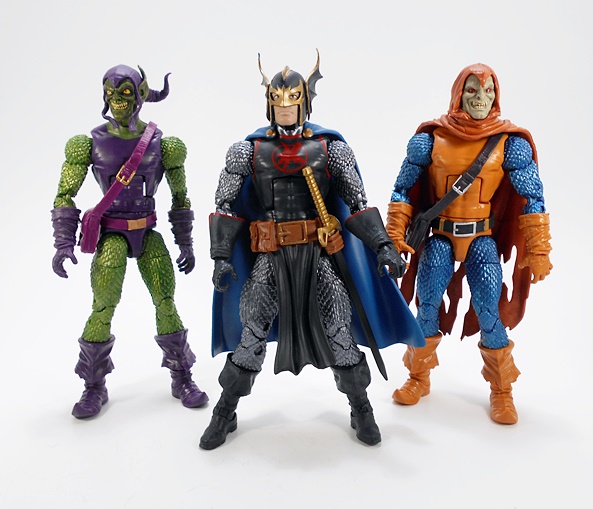 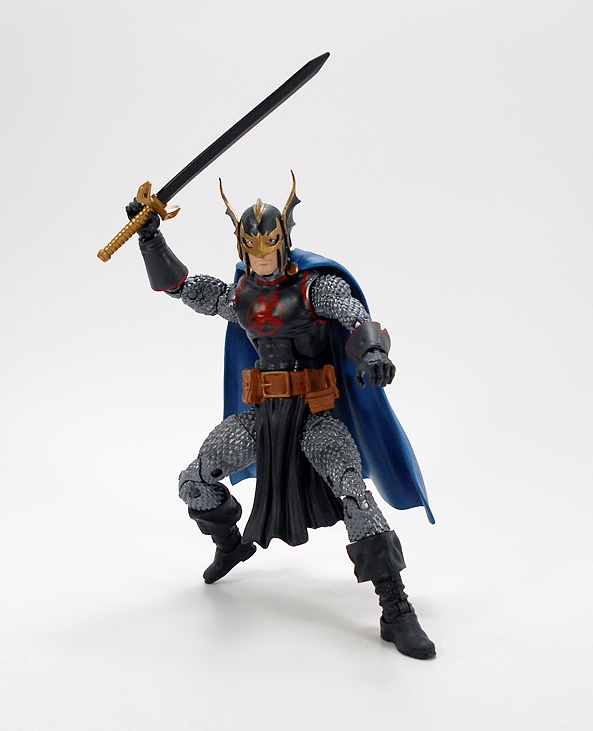 Ultimately, I dig this figure a lot. He looks great standing on the shelf and there’s just something about his design that takes me back to films like the 1953 classic Knights of the Round Table. The extra heads go above and beyond for fans of the character who want to go with one particular look, and if this guy ever starts showing up for as cheap as some Legends figures have, I could easily see myself picking up a couple more. And that’s almost a wrap for this wave. Next Monday I’ll be back to check out Malekith as well as the Cull Obsidian Build-A-Figure.

And I can’t depart without wishing everyone a happy and safe Christmas Eve today and a Merry Christmas tomorrow. I also need to face up to the fact that I’m probably not going to be able to do a big review on Christmas, like I’ve been doing the last few years. Usually I can get a jump on that well before Christmas Eve, but this year my work schedule, family obligations, and other stuff going on in my life just hasn’t afforded me the time. I’ll still check in tomorrow, and maybe throw something together for Christmas Day, but I can’t promise anything. Perhaps, I’ll try for something special on New Year’s Day instead.