It’s time for another Marvel Monday and today is proof that I probably need to shake the box that holds my unopened Legends figures, because today’s random grab takes us back to the Sauron Wave! And I’m fine with that, as I’m rather excited to get the Sauron BAF assembled. But there was no cheating this week. Honest! So let’s go ahead and have a look at Wolverine! 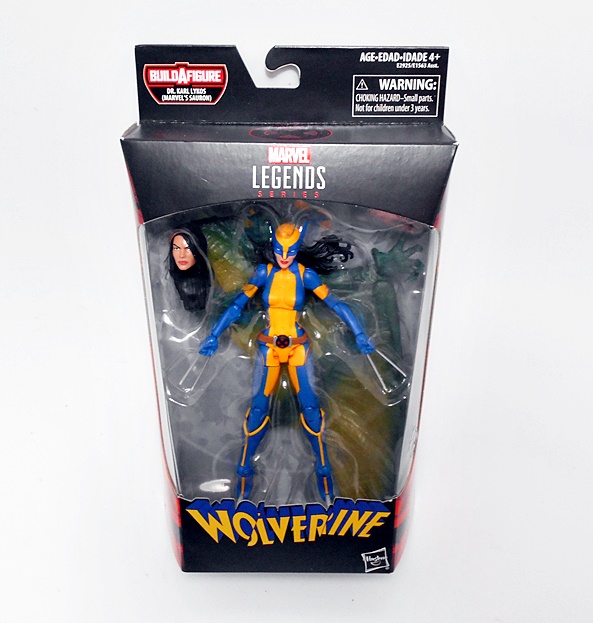 And this is, of course, Laura Kinney as Wolverine coming hot (well, more like tepid) off the presses of another of Marvel’s sad and pointless gender-swaps. Then again, I’m one of those craaaaaazy people that believes strong female characters can sell books and don’t need to glom on to a male character’s identity to do it. But I will say that of all these recent identity-swaps, I actually didn’t mind this one so much. After all, Laura is one of those great characters that I just mentioned that doesn’t need to bogart Wolverine’s name to sell books. Not something I could say about Jane Foster or Riri Williams. Oh shit, my rant alarm is warning me that I’m getting dangerously close to going off topic, so let’s open this damn figure!

Whatever my feelings on the book, I sure as hell can’t deny that Laura looks amazing in the costume and this figure sells it big time! There isn’t a hell of a lot of new sculpting here from the neck down, as Hasbro lets the paint do the talking when it comes to the costume detail. There are, however, newly sculpted boots, which appear to be layered over the lower legs. It makes them a bit thicker, but not so much that it bothers me. The only other sculpted piece is the brown belt that hangs on her hips and sports the X-logo.

If you read my review of Bishop, than you know how much I love the yellow and blue deco of the 90’s X-Men costumes and those lovely colors are on full display here. The paint lines are pretty sharp, and the only nitpick I have here is the yellow paint on the arms and legs shows up darker than the the yellow paint on the torso because the blue is bleeding through. It’s not as bad as we’ve seen in the past, but still worth mentioning. 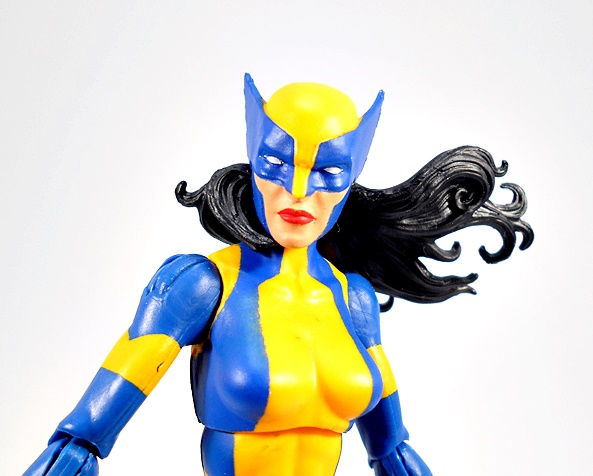 The figure comes with two heads, one masked and one unmasked. They’re both solid enough, but I can’t imagine not displaying her with the masked one. I love the classic design of the cowl and the way they sculpted her hair blowing off and to her left. It just looks amazing. Maybe if this figure shows up later on at a discount I’ll pick up a second to display both ways. The unmasked head looks fine on its own, but it’s hard for me to equate both as being the same person. The unmasked head just doesn’t look anything like the exposed part of the face on the masked head. But that’s OK, because I have another use for it…

It looks fantastic on the X-23 figure! 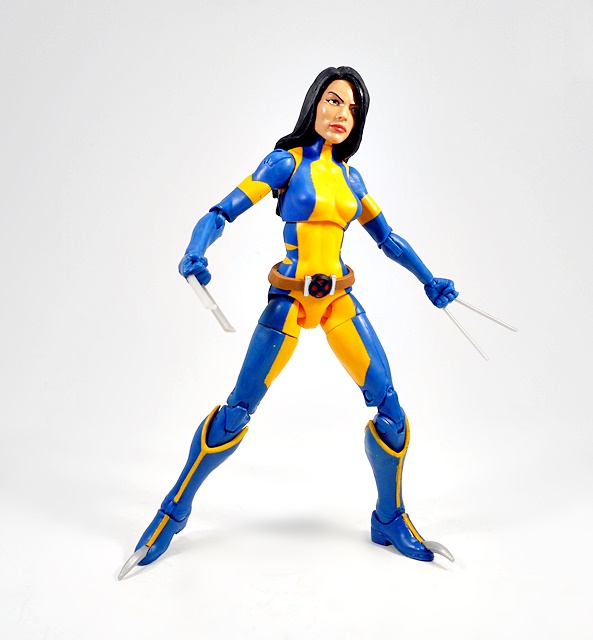 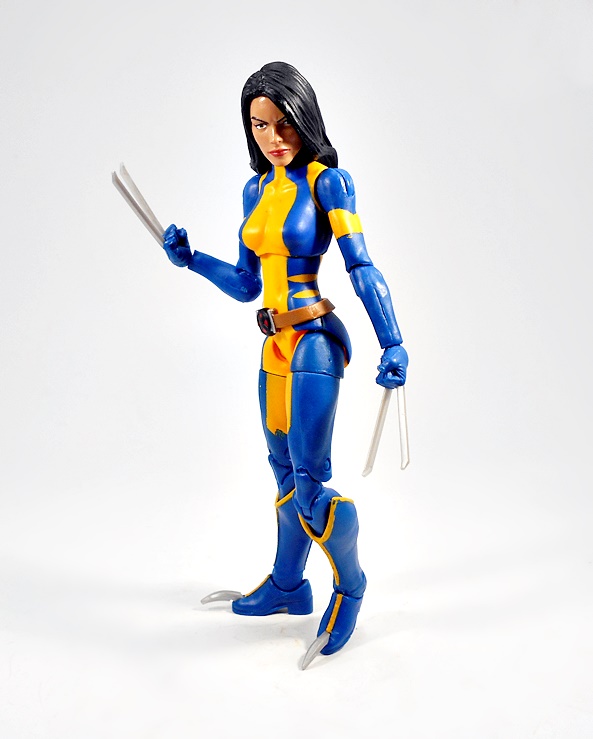 As with past Wolverine figures, the claws are slotted into the knuckles and they are removable, although I’m going to abstain from doing it. I removed one and found it really difficult to get back in. And unlike the X-23 figure from the Sasquatch Wave, this time Ms. Kinney is sporting her toe blades too! Now these blades tend to fall out pretty easily. In fact, I was positive I had lost them at least once. 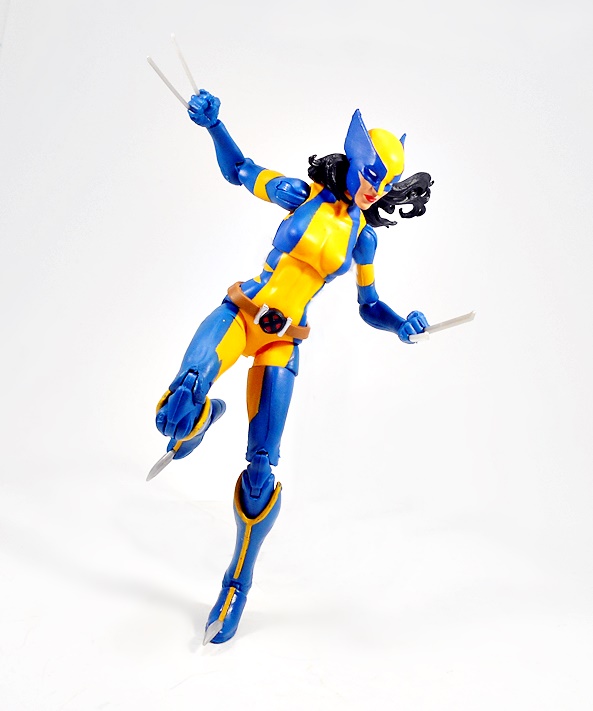 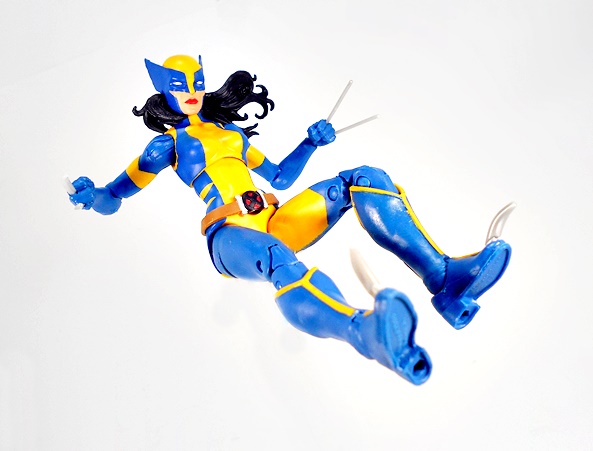 The articulation here is standard stuff for our Legends ladies. I do like that they got the swivels in the lower legs, despite the sculpted boots. As for the rest, you get rotating hinges in the shoulders, elbows, and wrists. The legs are ball jointed at the hips with double hinges in the knees, swivels in the thighs and both hinges and lateral rockers in the ankles. There’s a ball joint under her chest, and the neck is both hinged and ball jointed. 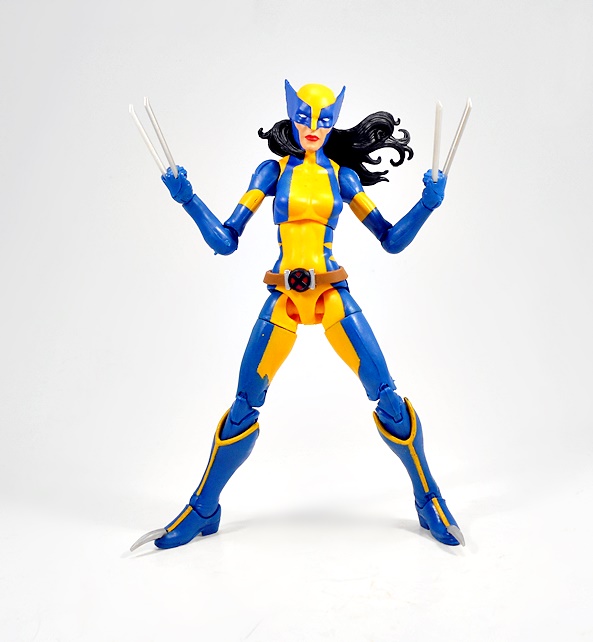 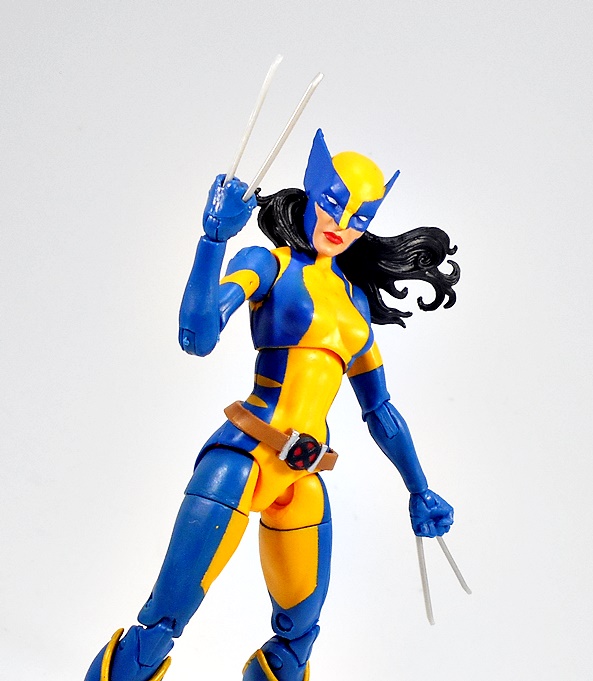 Hasbro has been killing it with the X-Men figures lately, and Ms. Kinney as Wolverine is just another fine example of that. And nope, I don’t need to love the book to appreciate this figure. While the identity swaps are mostly cheap gimmickry, if anyone was going to take over Wolverine’s tiger stripes, it always should have been X-23 and I’m glad to have this figure on my Legends shelves. Besides, she just looks so damn good in those colors!