Today’s review falls into the better late than never category. I chipped away at it between hospital visits and family crisis, and managed to just wrap it up this evening. If there was ever a great example of how toys are therapy to help me get through impossible situations, this week has been it. So, what’s on today’s agenda? Orcs!!! The Orcs were a big part of previous waves of Mythic Legions, but they got the short stick when it comes to Advent of Decay. Hey, I get it. T4H had a lot of new races and factions to introduce, so it was only natural that some previous ones had to take the bench and sit most of this one out. That’s not to say the Orcs were completely absent from this assortment and today I’m checking out one of their few appearances in the Advent of Decay. And it’s none other than Queen Urkzaa, the ruler of the Orc Nation! 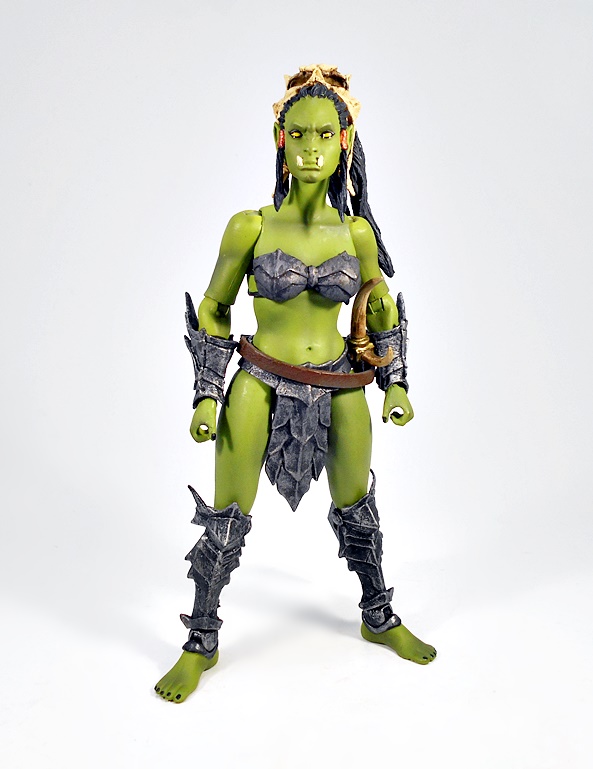 We’ve already seen these scantily clad female parts several times, not to mention in a variety of different skin colors, but here we’re seeing it in green for the first time. Urkzaa’s body is actually a pretty close match to the Demoness Xarria, as she shares a lot of that wonderfully crude and jagged armor that works so well with Orcs and Demons. The breast armor, the forearms, the knees, and the grieves are all the same. The waist armor is also the same, but here it lacks the hip armor and trades the front sash for a swatch of segmented plate. Urzkaa also borrows Herra Serpenspire’s bare feet. And here’s a fun fact, she’s one of the very few figures in the Mythic Legions line up to not come with any shoulder armor pieces. 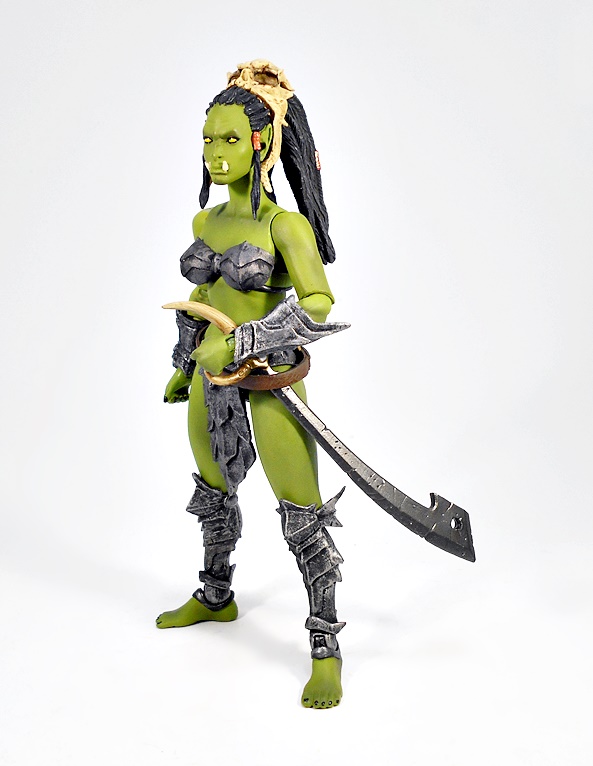 Obviously, the Orcs don’t stand on ceremony, because despite being a Queen Urzkaa doesn’t cut a very regal appearance. Instead, she looks more like a savage warrior, and she even wears less than her fellow Orc generals and soldiers. T4H have used a few different shades of green to convey Orc flesh and I like that little hint of variety. Urzkaa’s skin leans a little toward the brighter side of green with some nice shading, and even some paint hits on her fingernails and toenails. The paint on the armor looks as great as ever. The gray wash mixes beautifully with the rough pitting in the sculpt to make it look well-worn and battle weathered. From the neck down, there’s absolutely nothing to suggest that Urzkaa is the ruler of the Orc Nation. 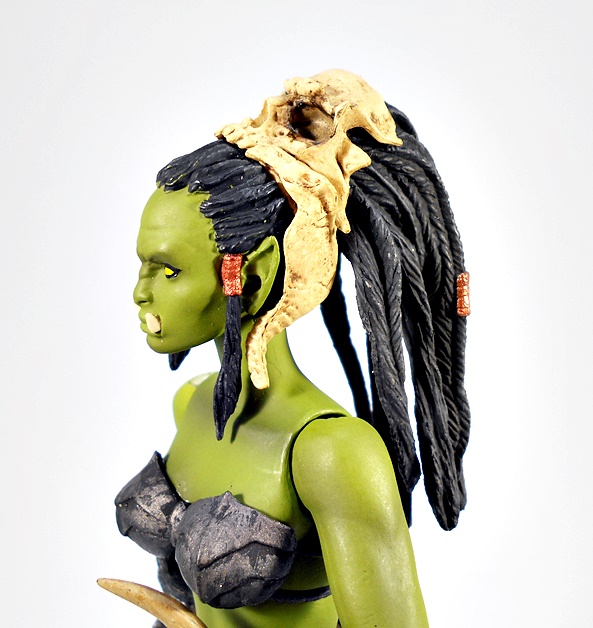 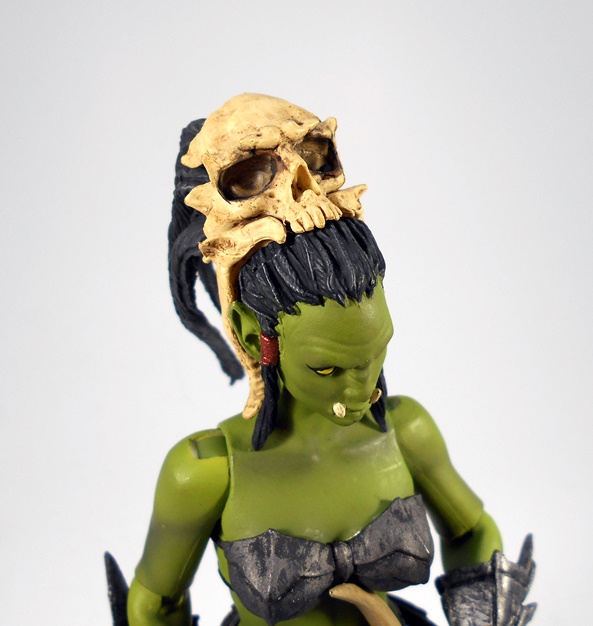 The portrait is all business! Urzkaa still manages to be a cutie even with those massive fangs growing up out of the bottom of her jaw. Some added ridges to her nose and brow gives her that not-quite-human appearance, and her almond shaped eyes are yellow and pupil-less. Is that a little mascara I see? The hair sculpt features two bundles of banded hair, each falling in front of one of her pointed ears. The rest of her hair is funneled through a headdress that I can only describe as a creature skull with an inverted jaw bone. It looks damned wicked!

As with her armor, when it comes to weapons, I guess Urzkaa believes less is more. In other words, she doesn’t come with a whole lot. She also doesn’t believe in carrying a shield. With that having been said, there are a couple of interesting blades in her arsenal. The first of which is the really cool Orc sword that was introduced in one of the earlier series. This design features a really distinctive hilt the handle and cross-guard made up of curved horns or teeth, I’m not sure which. The blade is that of a sweeping scimitar with a dark gray finish and a nasty clipped point that gives it a feel of a clever. The blade itself is littered with nicks and pitting to show that it’s seen plenty of action. T4H have used this blade very sparingly throughout the line so far, so getting it here is still a real treat.

The other piece we’ve seen before is the classic spear that goes all the way back to the original Kickstarter. If you’ve been around for my Mythic Legions reviews, then you know we’ve seen this one plenty of times. It’s possibly the least interesting of all the Mythic Legions arsenal, with a chunky shaft and the point all sculpted as one piece. This one has a brown rusty finish, which looks quite unbecoming of the Orc Queen, but it still looks good in her hands.

The final weapon included here is this grizzly looking bone cutlass. If I’m not mistaken, this is the first time I’ve seen this weapon and it is a pretty evil looking piece of cutlery. It’s all sculpted from one piece of plastic and made to look like it’s constructed of fused bones, and the yellowed finish makes it look ancient. 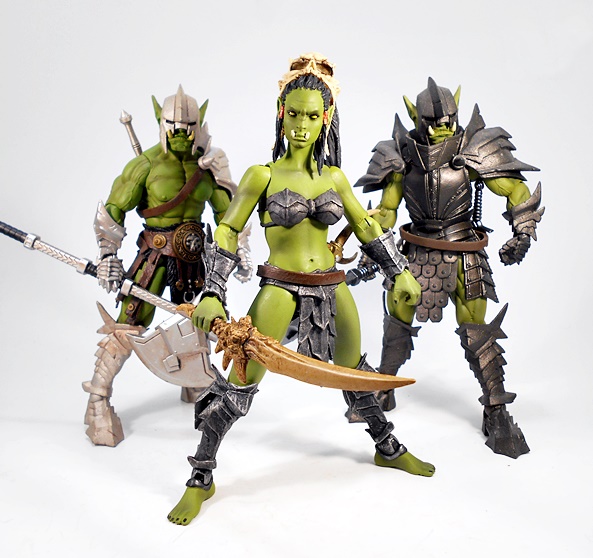 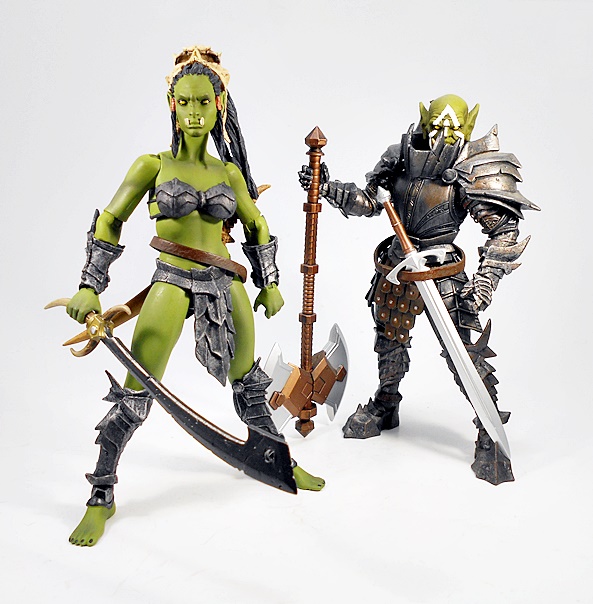 I’m a little torn on this figure, mainly because of her bio. On the one hand, the figure itself looks amazing and I’m thrilled to be able to add her to my collection of Orcs. On the other hand, even for a savage race of warriors, as a Queen I think Urzkaa looks a bit too pedestrian. I would have liked a cape, maybe attached with those jagged shoulder pieces, or even some skull shoulders would have been cool. She’ll look great charging into battle with her fellow clan, but I feel like her design pales in comparison to the Goblin and Dwarf Kings, not to mention some of the more elaborate skeletons. I haven’t decided whether or not to toss out her bio and just consider her a female warrior, but either way I think she’s a fantastic figure.

One comment on “Mythic Legions (Advent of Decay): Queen Urkzaa by The Four Horsemen”