As promised, I’m back today, after a long and painful hiatus, serving up a new Marvel Monday review. I’m going to skip a lengthy preamble about coming back, and just jump right in. Hopefully I won’t be too rusty… So, I haven’t purchased many new toys in my absence, but I have plenty on the stack to get through, and my Marvel Legends backlog is as big as ever. I thought I’d bump today’s set to the top of the list, since I just saw Spider-Man: Far From Home last week and I’m still riding that Web-Head High. Wow, what a fun movie that was!

I want to say this set was a Target Exclusive, but there’s nothing on the package that calls it out, so don’t quote me on that. I just know that it showed up on my doorstep from Target, and up until that point I had completely forgotten that I pre-ordered it. And yes, it’s based on Homecoming, despite the fact that it shipped closer to the new movie than the former one. Included in the box is a variant of Spider-Man as well as a figure that I never thought we’d get… it’s the MCU version of MJ! The figures come in a standard two-pack Legends window box with some stills from the movie on the side panels and a great look at the goodies from the front. All in all, the package makes for an attractive display piece, but since available space continues to be at a premium around here, I’m gonna shred this box all to hell. Let’s start with Spider-Man!

So, this is Spidey in his original Stark-made Homecoming suit, while wearing both a hoodie and his school blazer over it. I expected this figure to borrow heavily from the last Homecoming Spidey, but there’s actually quite a bit of new work here. The legs appear to be the same sculpts, but these are painted much better than what I got on the previous figure. The blue and red looks a bit more vibrant, but the most notable difference is how much clearer the panel lining is on the blue parts. It can barely be seen on the original version, but here it’s just so much more prominent. The torso looks similar to the other figure, but it’s actually new as it doesn’t include the lateral shoulder crunches. The hit to articulation is a bummer, but it makes sense that these had to be omitted to accommodate the jacket and blazer. 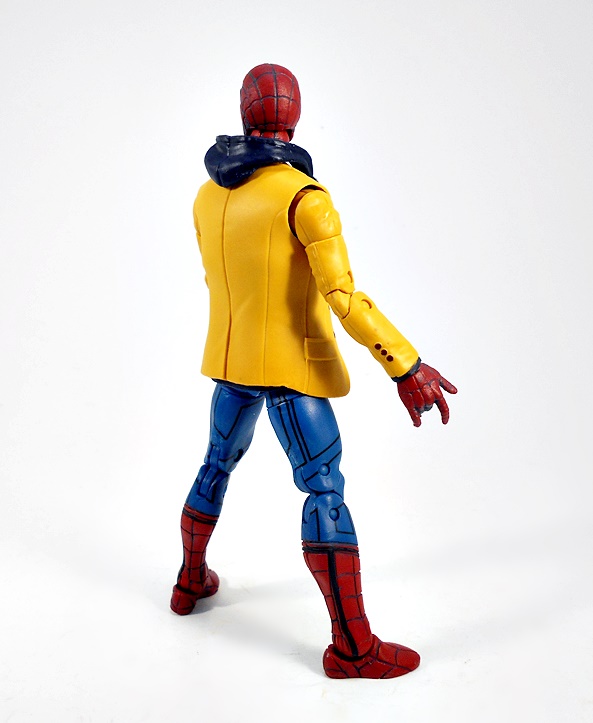 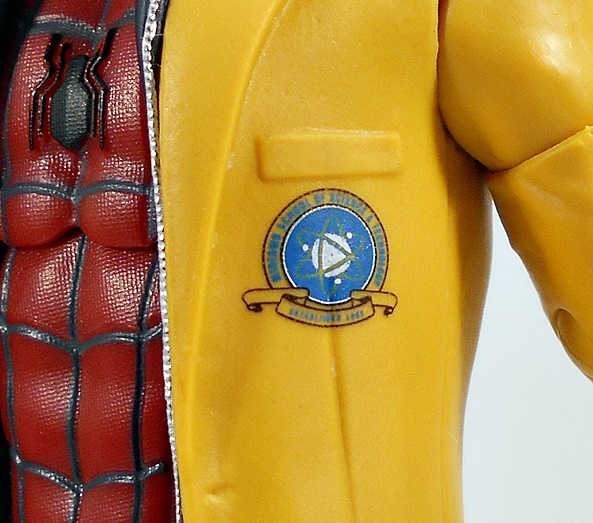 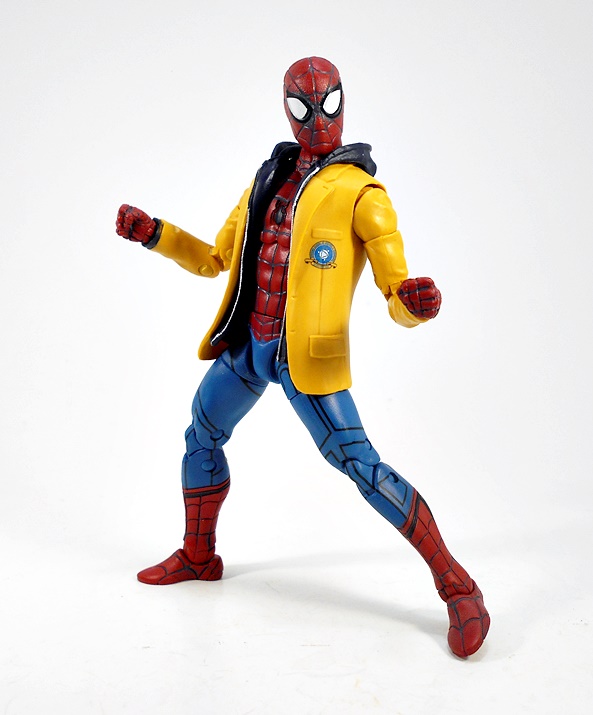 The jacket and blazer are each cast from separate pieces of soft plastic and layered onto each other, which looks great. If you peel aside the blazer, you can see that the jacket under it is really just a frame made up of the exposed zipper edges and the hood. I’m guessing they went this route so it wouldn’t look too puffy and I think it was a good decision. The bright yellow blazer pops against the blue and red of the costume, includes some sculpted stitch lines, pockets, and even has the crest of the Midtown School of Science & Technology printed on it. As always the sleeves are sculpted as part of the arms, and apart from the absent shoulder crunches, the articulation is identical to the previous Spider-Man figure. 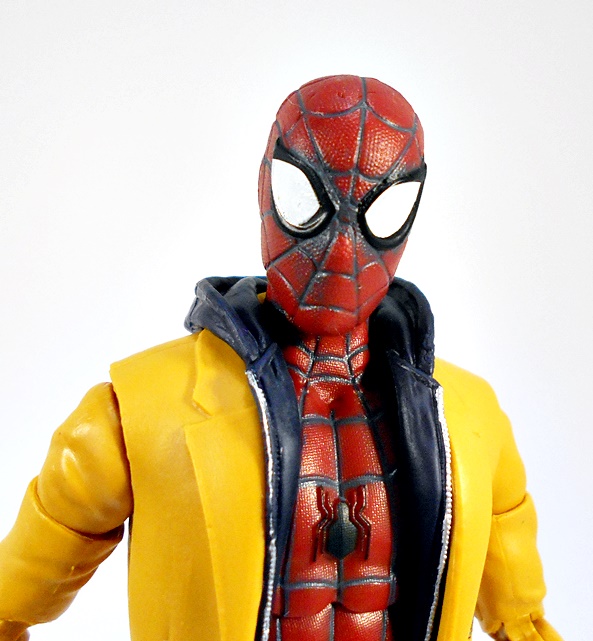 Alas, my big gripe with this figure is the head, which isn’t nearly as well done as the predecessor. The big issue here is that the white paint used for the eyes is badly misaligned. Also, I think the shading around the eyes looks weird. I’m not sure if this was supposed to convey shadow or if it’s just a sloppy job printing the web lines, but I don’t care for how it came out at all. Luckily the heads are swappable, but that doesn’t help when I plan on displaying both figures together. 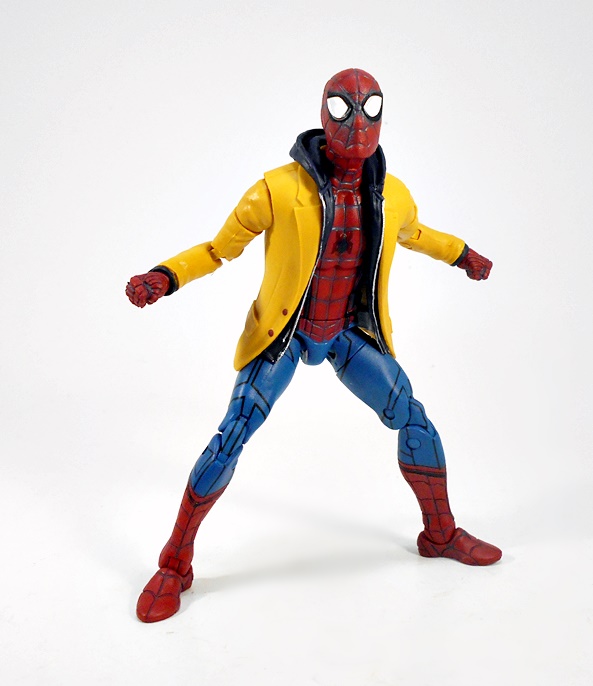 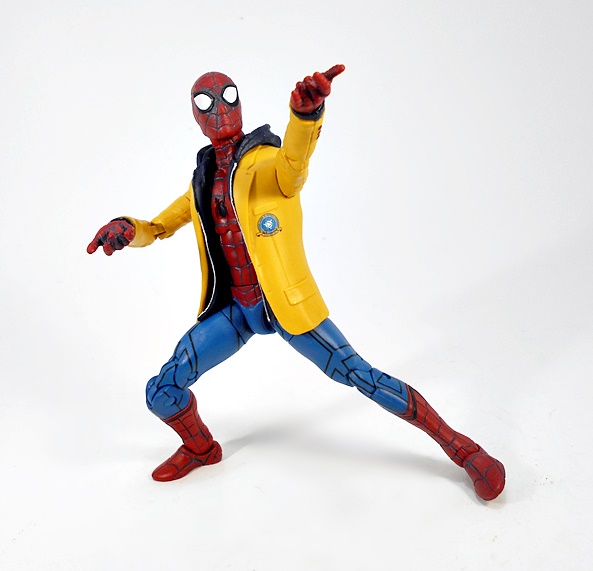 Spidey comes with two sets of hands. You get the regular fists and the usual thwippy hands. Nothing new here, but I’m glad to see they packed in some options. All in all, this isn’t a bad figure, I just wish the head was painted better. I don’t know if I would call it essential, but I think him wearing the blazer is pretty iconic to this film, so I’m certainly happy to have it. Moving on to MJ… 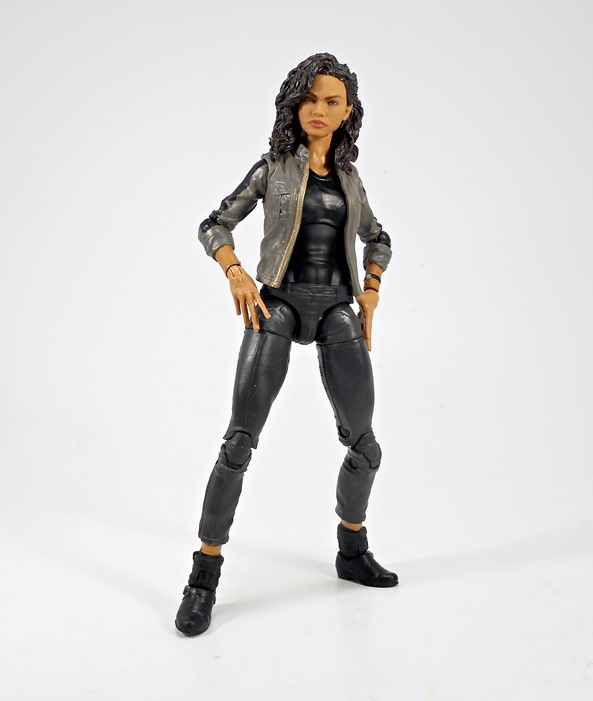 So yeah, this was the figure I thought we’d never get. At least not from the first film, where her identity wasn’t even revealed until the end. Although thanks to casting leaks, most of us had gotten wind of it by the time the film premiered. MJ’s wardrobe didn’t really stand out for me, but I recall she sported something of a grunge look for most of the film, and this figure definitely reflects that. You get a black top, gray and black jacket, gray pants and black boots. It’s not the flashy stuff I’m used to comic book MJ wearing, but it reflects the new character pretty well. A number of the parts here look familiar, but it also looks like Hasbro invested in some new tooling. The jacket features the usual soft plastic vest with the sleeves sculpted on the arms and it looks fine. If this isn’t what I would call a stand-out figure, it’s more because of the design of the wardrobe than it is any failing on Hasbro’s part. In short, it’s perfectly fine. 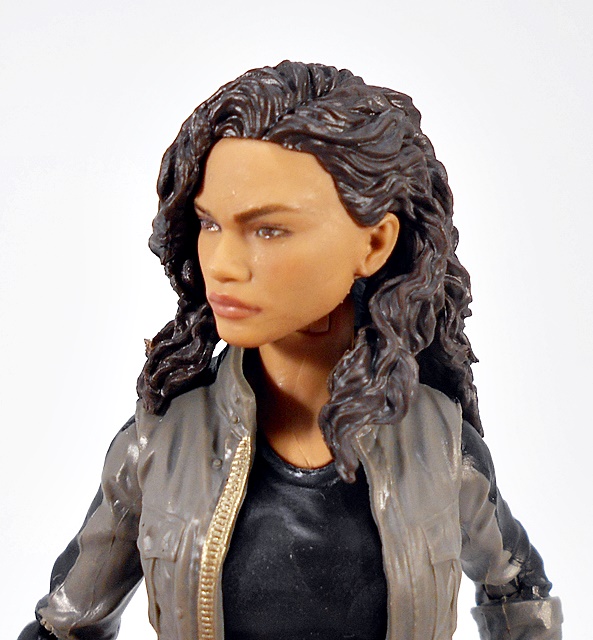 What’s better than perfectly fine are the two head-sculpts. Hasbro did a beautiful job capturing Zendaya’s likeness, and I’d even go so far as to say this is some of their best work. The first head features her hair down and a rather perturbed expression. Lets not forget that MJ spent most of her time in the film looking skeptical or just plain scowling. Either way, I think they did a wonderful job with this one. If I had to throw out a gripe it would be that the hinge in the neck stands out quite a bit. But I’m really looking for nits to pick. 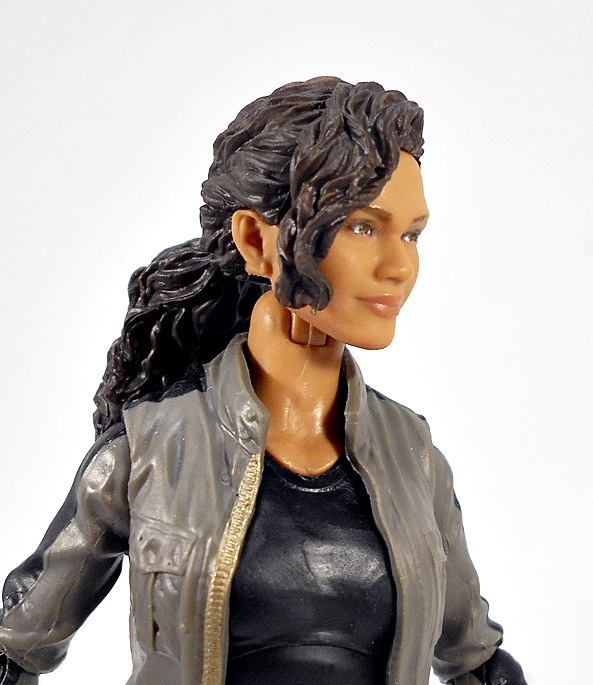 The alternate head features MJ’s hair tied back with a number of strands falling down the right side of her face and covering her cheek. This head also features a smiling expression, which is a nice contrast to the glowering alternative. Both sculpts capture her likeness perfectly, but I’m probably going to be partial to displaying my figure with the second head. 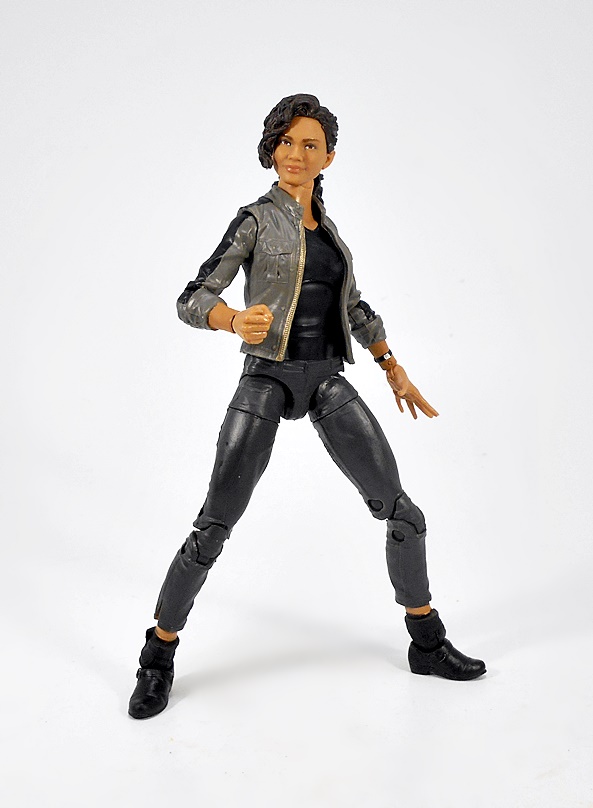 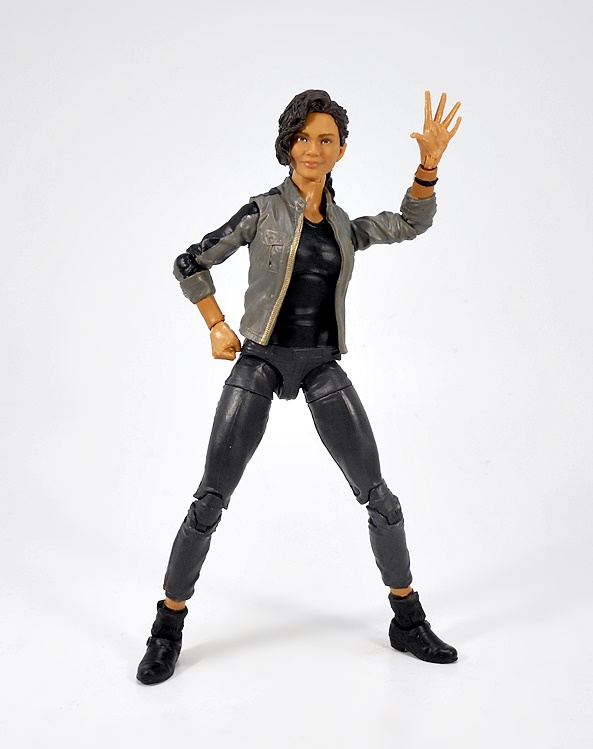 Like Spider-Man, MJ comes with two sets of hands. One pair feature splayed fingers, the other pair features a right fist and a left accessory holding hand. Nope, she doesn’t come with any accessories to hold, but I’m sure I could dig something out for her. As for the articulation, this is pretty standard stuff for the female Legends figures. The legs have ball joints in the hips, swivels in the thighs, double hinges in the knees, and hinges and rockers in the ankles. The arms have rotating hinges in the shoulders, elbows, and wrists. The torso features a ball joint under the chest, and the neck is both hinged and ball jointed. 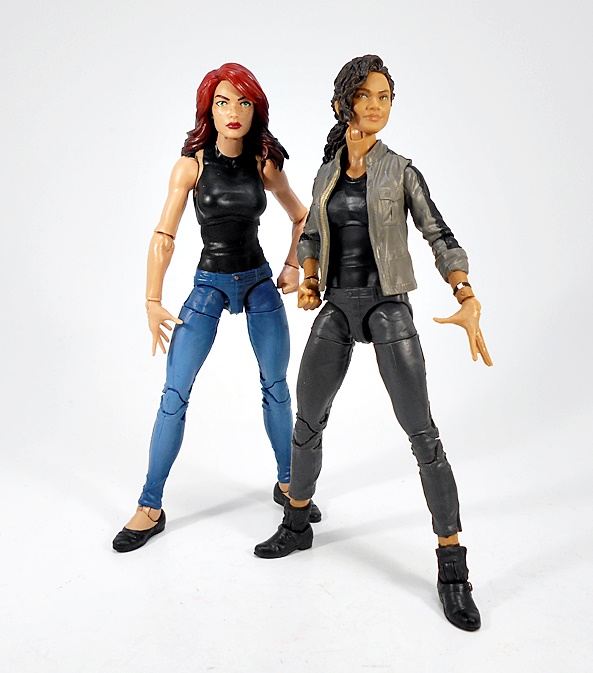 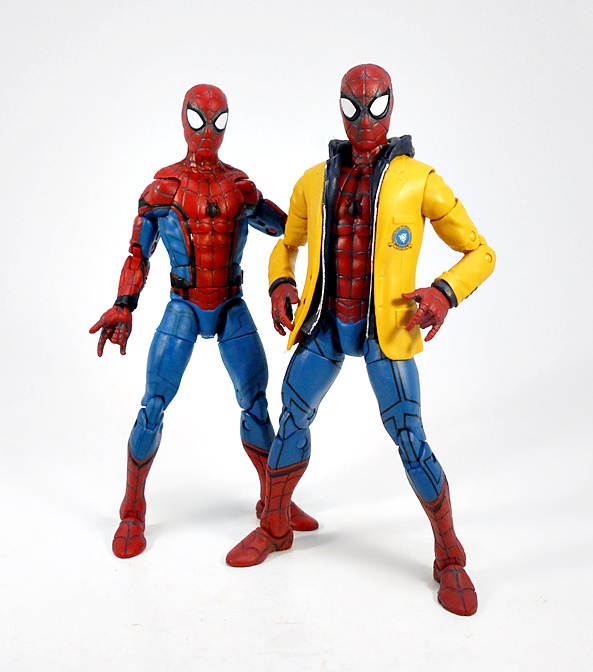 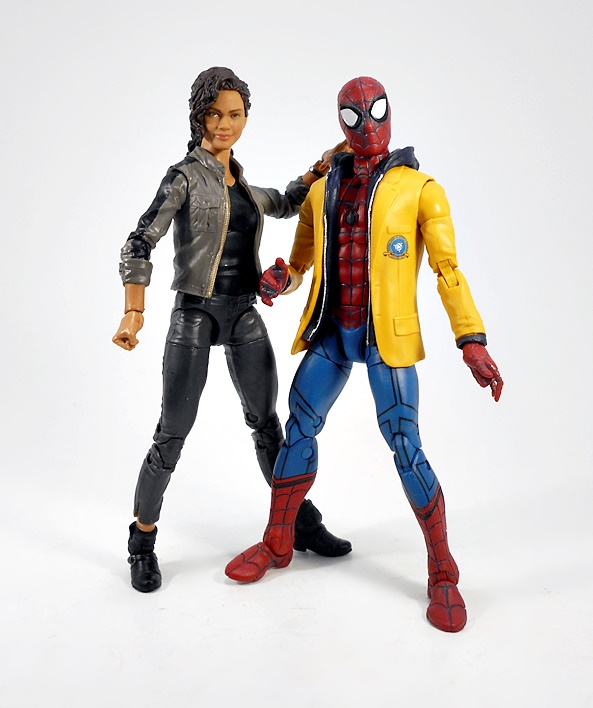 As I mentioned earlier, I was interested in this set enough that I pre-ordered it. That’s something I don’t often do with Legends figures these days, because there are just so many of them coming out in any given month. And as it turns out I like these figures a lot, even if the Spider-Man head has room for improvement. I’m not sure I would call this a must-have, although with MJ playing a much bigger part in Far From Home, I wonder if she’ll get another figure in the near future. If not, I suppose she’s the real draw of this set. I dig the school blazer Spidey well enough, but I wouldn’t consider it essential. And that’s a wrap for my first review back. I do hope to be back again before the end of the week with something else, but it will all depend on how much time I get to spend at home in the next few days!