I’m here to try to get Marvel Mondays back on track and this makes two in a row, which is a nice start. I actually began writing this review weeks ago and the original intro is no longer relevant, so let’s just scrap it. Blink is a recent addition to my Marvel Legends pile of shame, and I didn’t feel like digging through the pile for the sake of randomness, so let’s just jump right in and check her out! 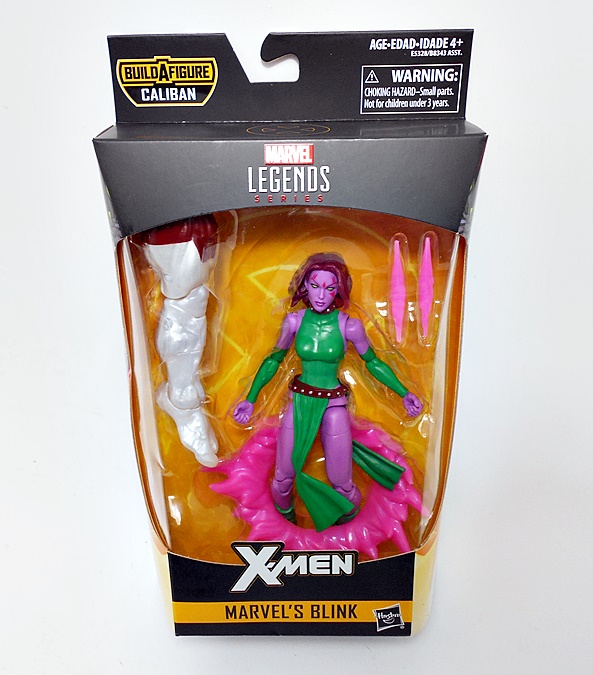 It’s an interesting time to be an X-Men fan. The movie rights are now solidified with the MCU. Marvel is shaking up the X-Men comics and it sounds like they’re handing the reigns to Jonathan Hickman. And the X-Men are rapidly catching up to Spider-Man as the new darlings of the Marvel Legends line. There have been more than a few great waves of Marvel’s Mutants hitting the pegs, offering up some great Triple-A classic characters, as well as some of the lower tier ones, like Blink here. I guess it didn’t hurt that Blink appeared in live action X-Men spin-off series, The Gifted, but I can’t say as I watched it. 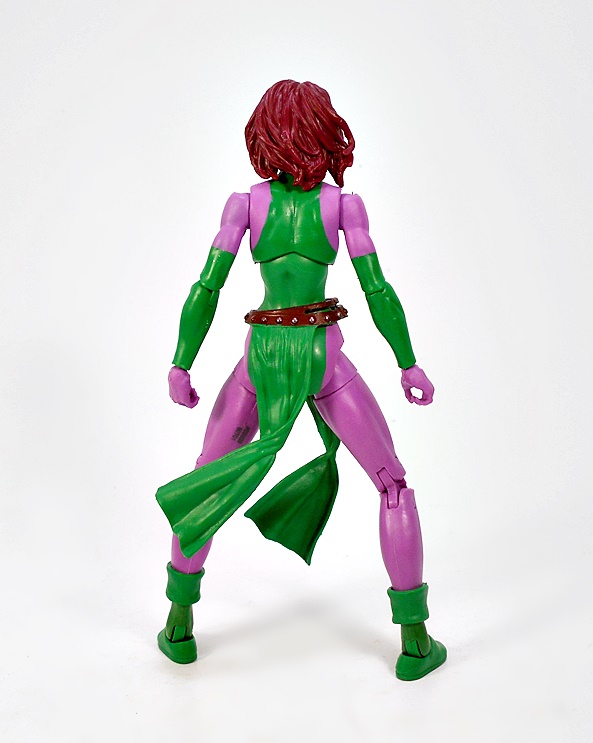 And here she is out of the box and looking like she just rode cross-country on a Bison. Yeah, before even getting into the figure, I have to mention that Blink came off the tray with her legs warped all to hell. I knew this would be the case before I even opened her. It’s easy to tell by the way she’s packaged, and oh boy is this a pet peeve of mine. Why would you knowingly damage a figure by posing it a certain way in the box? I’m sure I will have some luck straightening out those gams, but I’m not going to do Hasbro the favor of fixing the figure before reviewing it. This shit is just adding more misery to my life. But setting aside her bow-legged-ness, Blink feels a lot like the recent release of Mystique. I don’t think the body is a total reuse, but it’s close enough and when you couple that with the sculpted belt and sash, and the similarities in painted costume, it’s hard to shake that flavor of sameness. I’m not complaining, the figure is definitely faithful to the character design and I appreciate the extra touches like the sculpting on the tops of her buccaneer boots and the studded choker that matches her belt. Plus, the sash on the belt is pretty convincing as the lower extension of her painted dress. Although I do find the way it’s pinched almost the same on the front and back to be a little odd looking. The coloring here is also fine. I like the mauve they used for her skin and the green for the dress, sleeves, and boots. The studs on the belt and choker are also neatly painted.

And I certainly have no complaints regarding the head sculpt. She’s definitely a Mutant hottie, with well defined features, her ears have points, and I love the way they sculpted her hair, giving the portrait a great sense of dimension and character.The markings on her face are sharp, and the thick eye-liner around her squinting yellow eyes looks great. Bravo on the portrait, Hasbro! 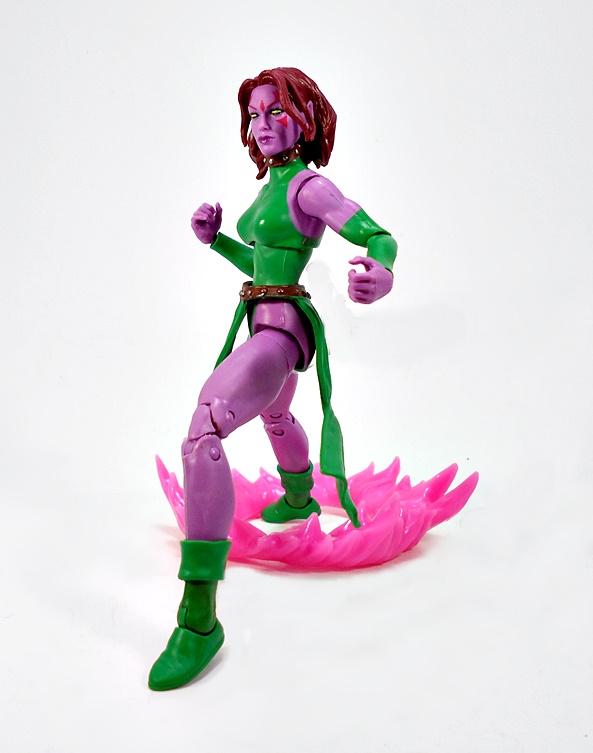 Blink comes with three effect parts, all showcasing her teleport capabilities. First up is this portal effect. It’s cast in semi-translucent hot pink plastic and it’s pretty fun to play around with. By now y’all should know that I’m never too enamored with effect parts, especially not the ones that Hasbro tends to churn out, but this one is easy to incorporate onto the shelf for display and I think it truly adds something to the figure.

Next up, you get two teleport spikes, for lack of a better word. She flings these at people and objects to teleport them. There isn’t a lot more to say about them, other than she can hold them in each of her hands. 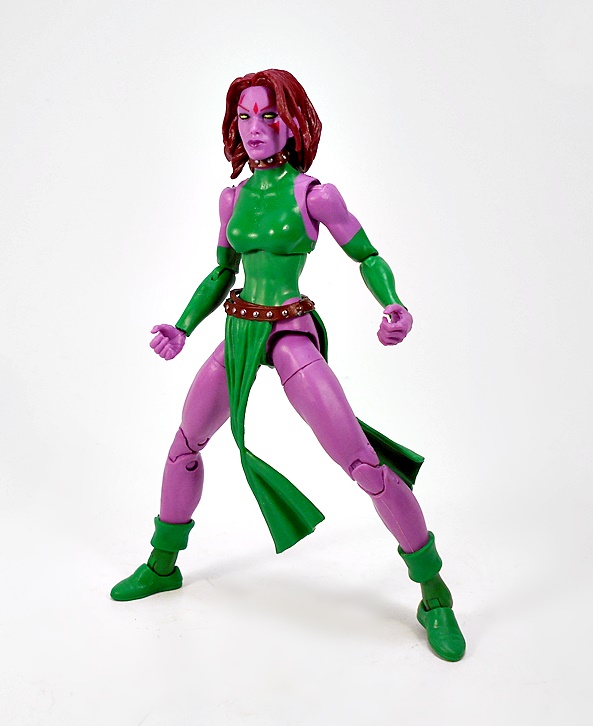 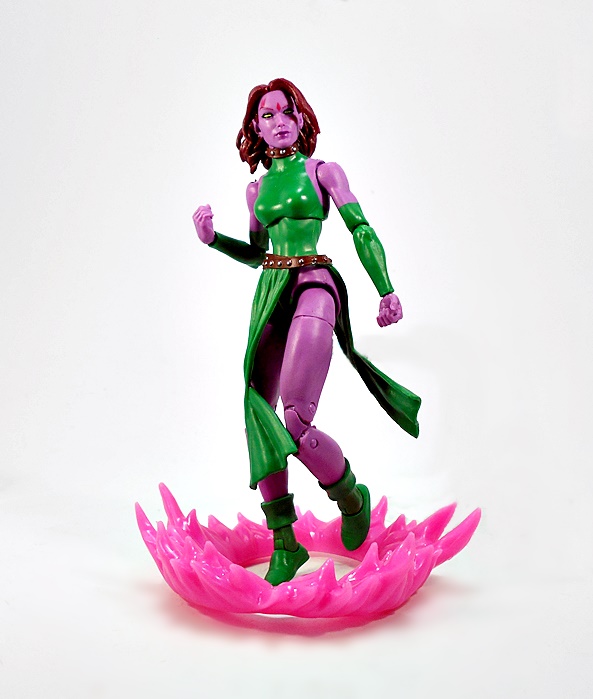 As I’ve said many times over, Marvel Legends has been great for universe building, and that means getting characters like Blink right alongside heavier hitters like Beast, Jubilee, and Gambit. Maybe she wasn’t all that high up on my list, but she was definitely on it, and I’m happy to be able to cross her off of it. And from sculpt to paint, they did a fine job with her. No, I’m not happy about the warped legs, andI should be able to fix that with a little hot water or a blow dryer, but come on, Hasbro. You’ve been in this game long enough that you shouldn’t be making mistakes like that.