Oh boy, do I miss Mythic Legions Wednesdays! The whole hiatus thing really threw a monkey-wrench into my progress through the Advent of Decay series. And as long as that’s the case, today I’m going to skip back in time to the original Mythic Legions Kickstarter to check out a figure that I passed on the first time around and have been regretting it ever since… The Vampire Carpathias! 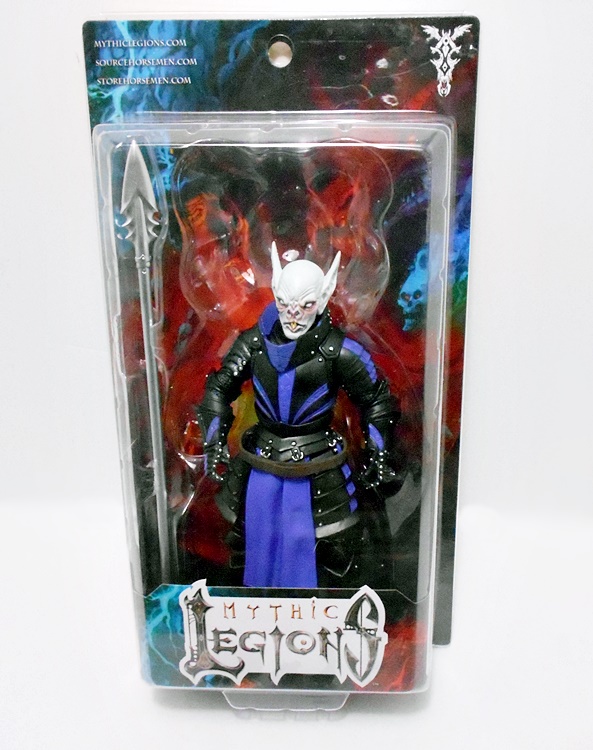 Cutting figures from the first Kickstarter to meet my budget was a sad thing. But that should be obvious seeing as I had to let Carpathias go. Of all the figures that had to be culled for the sake of budget, I think this guy hit the hardest. And it only got worse when Advent of Decay came a long and gave us even more vampires. Fortunately, we got a second chance at some of those figures with the All-Stars pre-order and I was finally able to remedy that terrible mistake. Let’s check him out! 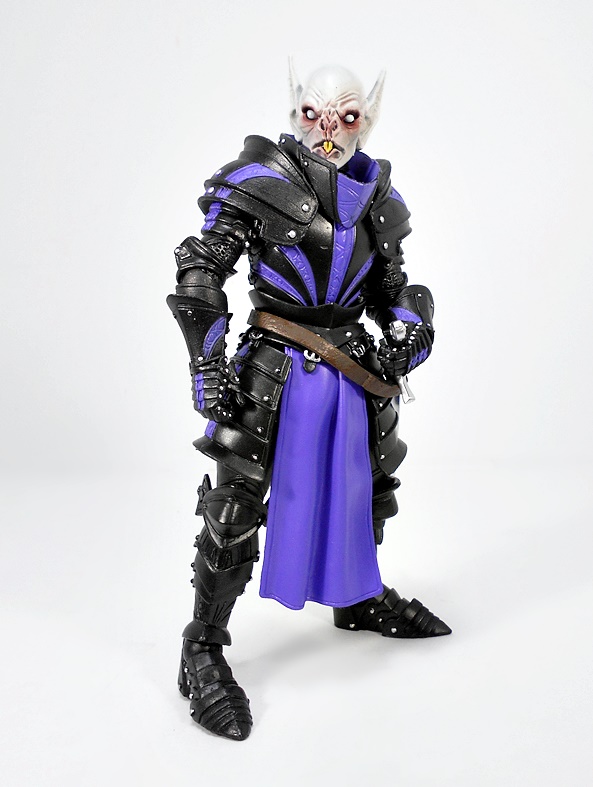 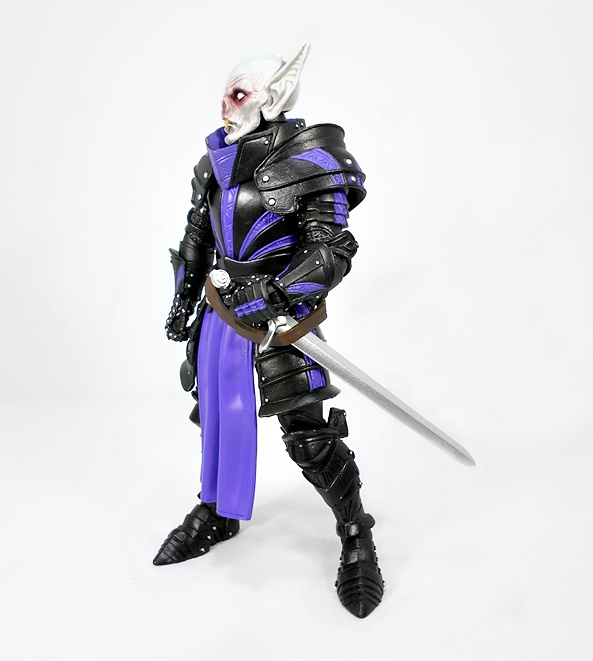 Like many of the armored warriors of the initial assortment, Carpathias’ armor mixes up the body parts we first saw used on Sir Gideon and Gorgo. In this case, his arms, torso, and gorget are Gorgo’s, and the legs, belt, hip armor, and lower sash are from Geoffrey. And just so that the top half isn’t all from one figure and the bottom from another, Carpathias wears Sir Geoffrey’s shoulder armor. In addition to the simple kit-bashing, the armor is given a fresh coat of paint with a black base and lovely purple accents, and the two make for an absolutely gorgeous deco. The whole thing is topped off with some meticulous silver paint detailing on the buckles and rivets. I can’t express how much I love the look of this armor. They should have sent a poet. A vampire poet. I just don’t have the right words. 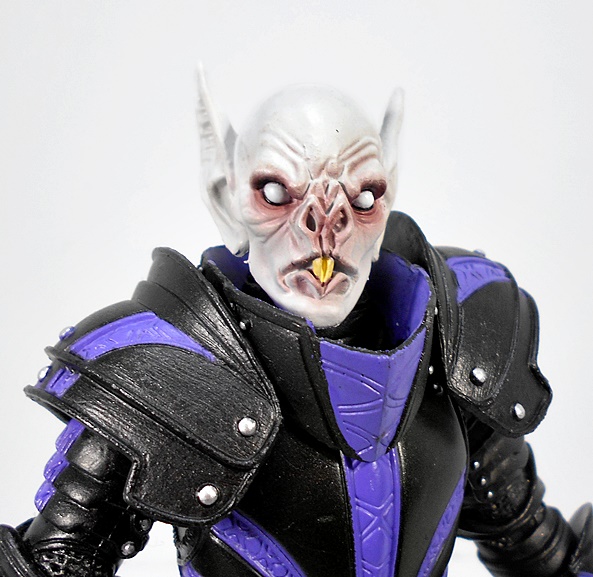 And that brings us to this goddamn glorious head sculpt. The vampires of Mythoss are a loving nod back to The Nosferatu, only a lot uglier. The bald pate is flanked by two super long and pointed ears. The brow ridge is a crinkled knot, the eyes are milky and without pupils, the nose is straight off a bat, and the mouth is gruesomely distorted to make room for those yellowed central fangs. I think I’m safe in declaring that this work of art is my favorite depiction of a vampire ever.

Despite Carpathias’ unholy heritage, his weapons are actually pretty standard stuff. He comes with the standard cruciform-style broadsword we’ve seen issued with many of the knights and a stout dagger with a nearly matching wheel pommel. Both weapons have silver blades and hilts, with black grips. Of course, you also get the ubiquitous brown sword belt. These are all great looking weapons, and I’m a big fan of their generic utilitarian design.

Carpathias also comes with the spear we’ve seen so many times before. This one is painted all in silver. Unlike the sword and dagger, this one is growing a little less welcome these days. It’s a decent enough weapon, but we’ve seen it so many times, and I really prefer when they paint the shaft brown. 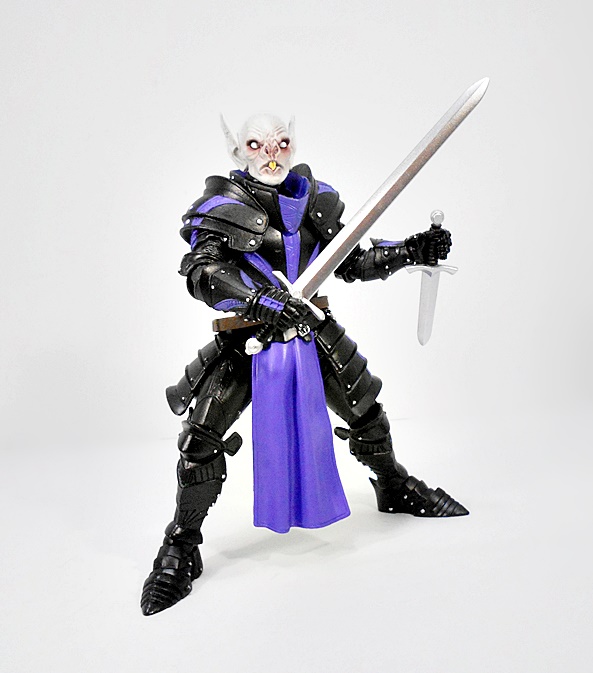 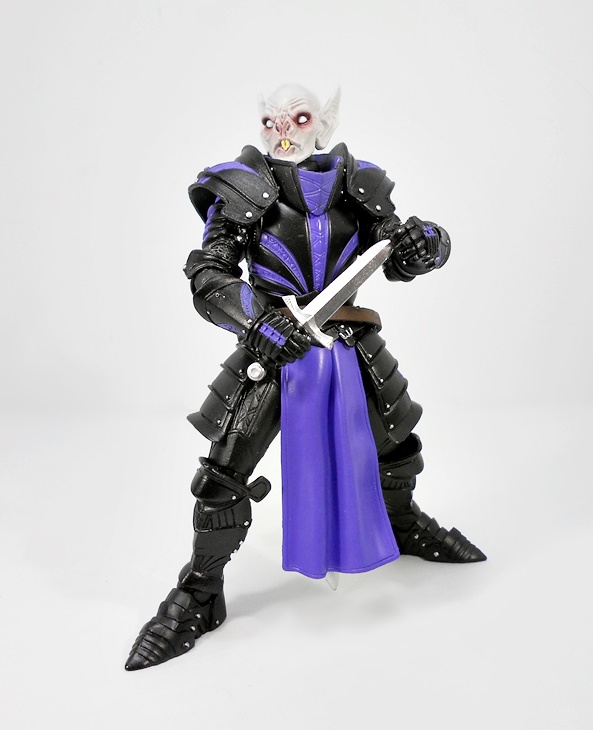 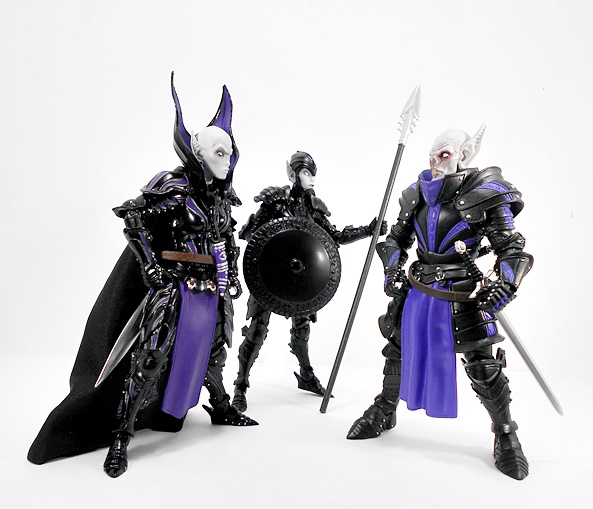 There were times when I considered paying scalper prices for this guy on Ebay, and those urges got even stronger once I got the vampires from Advent of Decay. Luckily T4H did the All-Stars sale and I was able to get him without dropping all that extra cash. Although now that I have him in hand, I think it still would have been money well spent. The Vampire faction has become one of my favorite races of Mythoss and Carpathias looks damn nice when flanked by a couple of the Vampire Legion Builders or conferring on courtly matters with Lucretia. And I’m happy to report that I still have one more Vampire from Advent of Decay to open. It probably won’t be the next one I review, but it’ll be coming up eventually!

One comment on “Mythic Legions: Carpathias by The Four Horsemen”