Once upon a time, there was a thing around these parts called Mythic Legions Wednesdays, wherein I was working my way through the Advent of Decay figures. I had hoped to make it through all of them before T4H shipped the next batch, but as most of you know calamity ensued in my life and I got off track. So as not to have to wait forever to open the new arrivals, I’ve decided to push them to the head of the line. So let’s open up the first of the Siege at Bjorngar figures!

Bjorngar introduced some new, bigger figures into the mix, and every fiber of my being wanted to dig right into those Ogres, but I decided to space things out and went for Faustia here instead. The packaging is none too different from what we’ve been getting all along. It’s collector friendly, but not spiffy enough for me to invest in space to store them, so I’ve been snipping off the bios and junking the packages here. And speaking of bios… Faustia is billed as being one of the lead clerics and right-hand to none other than Atilla Leossyr! 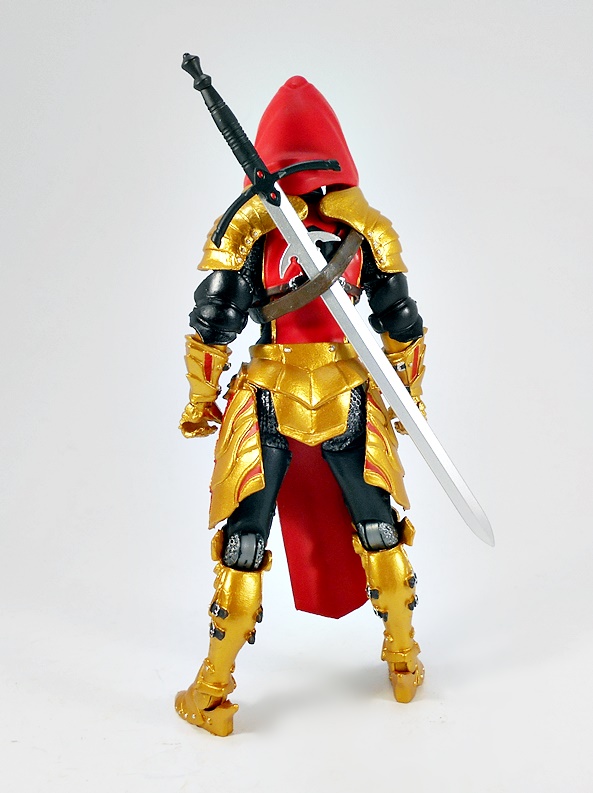 Out of the package, here’s Faustia with her shoulder armor pegged on and her sword slung across her back. And don’t she just look fine? Parts sharing continues to be the name of the game with Mythic Legions, but Faustia is very nearly a straight repaint of Delphina of Eathyross from Advent of Decay. And yet dismissing her as a mere repaint seems kind of unkind, because the new deco makes her look so fresh and new. I mean, just look at the colors! Faustia sports a snappy combination of gold armor pieces layered over black, with a sculpted, crimson tabard running down the center. Yup, all of that comes out of Delphina’s sculpt, but the figure is positively transformed by this new color palate. The gold paint is so lush and it stands out perfectly against the glossy black, with some panels painted a deep red. As always, all the little belts and buckles are painted, as well as the exposed chain-mail in the joints, and individual rivets. There’s even a crisp golden border painted around the upper tabard, and it’s finished off with a black crest of a dragon holding a hammer.

Faustia’s head is shrouded in sculpted hood with gold trim to match the tabard. It’s a beautiful face sculpt with glossy paint used for the eyes and lips, giving it a somewhat lifelike quality. There’s no sculpted hair visible, so either Faustia makes a habit of shaving her head, or her coif is meant to be tucked into the hood. The hood is actually sculpted as part of the head, and the hole where it connects to the neck is large enough to allow for a good deal of movement. Let’s talk some weapons! 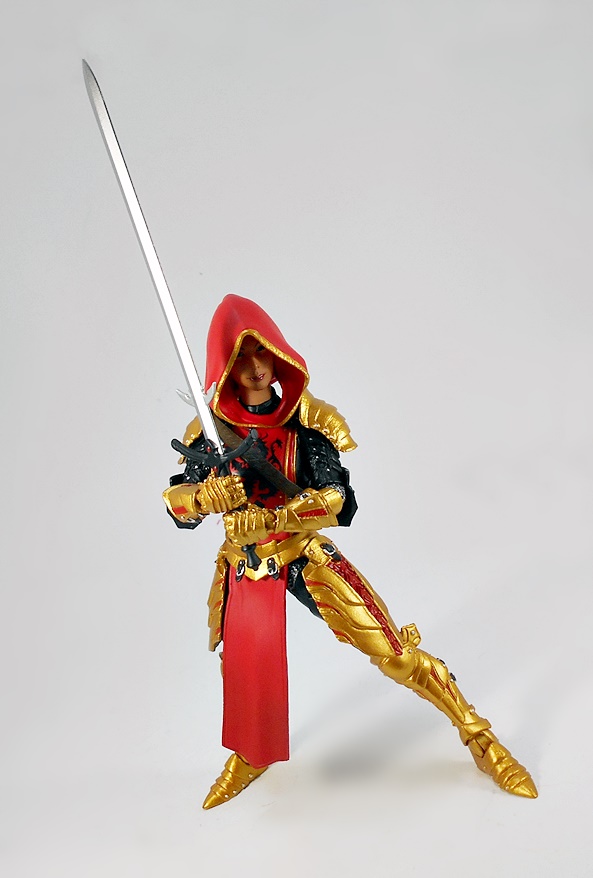 Delphia’s main arms consist of a long two-handed sword and a rounded shield. The length of the sword make it best worn on her back using the belt as a shoulder strap. Sometimes these belts don’t work too well with both pauldrons attached, but that’s not a problem with these. Of course, she can wear it on her belt, but I find it’s a bit awkward between how long the sword is, and the fact that the parrying hooks near the hilt keep it from passing all the way through the loop. The sword itself is a nice break from the same-old, same-old we often see in this line. It has an ebony hilt with a down-curved cross-guard and red stones in the guard and a bright, silver blade.

Likewise, the shield is a nice break from the overused pattern introduced in the original assortment of figures. It’s comprised of concentric circles, with gold face, a silver outer rim, and a red inner donut, and silver studs circling the outside of that red loop. I dig that the colors coordinate with Faustia’s armor, but that being said, I think the shield is what I like least about this figure. I don’t hate it, but It just looks too modern for me. Also worthy of note, T4H have doubled down on the angled grip handle for the shields and I’m still on the fence over these. I understand that the wrist clips, used in the original assortment, ran the risk of stressing and breaking, and also could scrape paint off the figure’s gauntlets, but in terms of practicality, they just worked better. I’d love to buy a whole bag of those clips from T4H so I could have the option of which type to use. Seriously, Horsemen… toss a bag of those up on your website!

Laying the sword aside for a bit, Faustia also comes with a crimson cloth cape, which attaches via the pegs in the pauldrons and can be a bit tricky for her to wear with the sword slung across her back. T4H did a fine job matching the color of the cloth with the paint used for her plastic tabard. Using both real cloth and sculpted plastic “cloth” as part of the same outfit can be hard to pull off, but I think it works beautifully here.

In addition to the optional cape, Faustia also comes with a helmeted head. And, surprise! It’s a repaint of Delphina’s sugar loaf-style helm. And again, I’m not going to quibble over the re-use when the end result looks this good! The bulk of Faustia’s helmet is painted in the same gold as her armor pieces, with a deep crimson paint applied to the cruciform visor reinforcement. The eye slits are breathing holes are painted black, and the individual rivets are carefully painted silver. 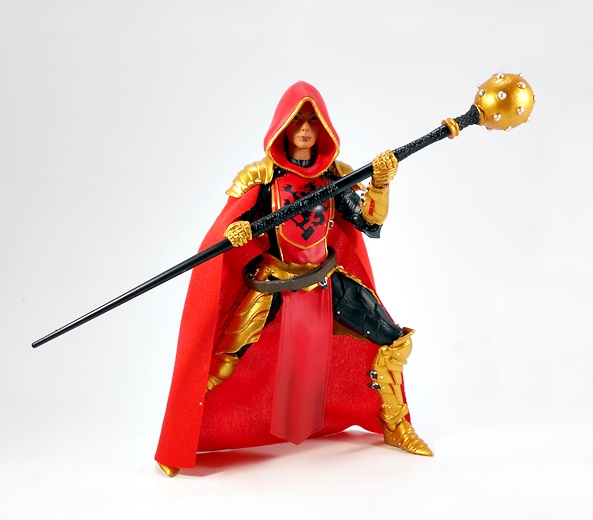 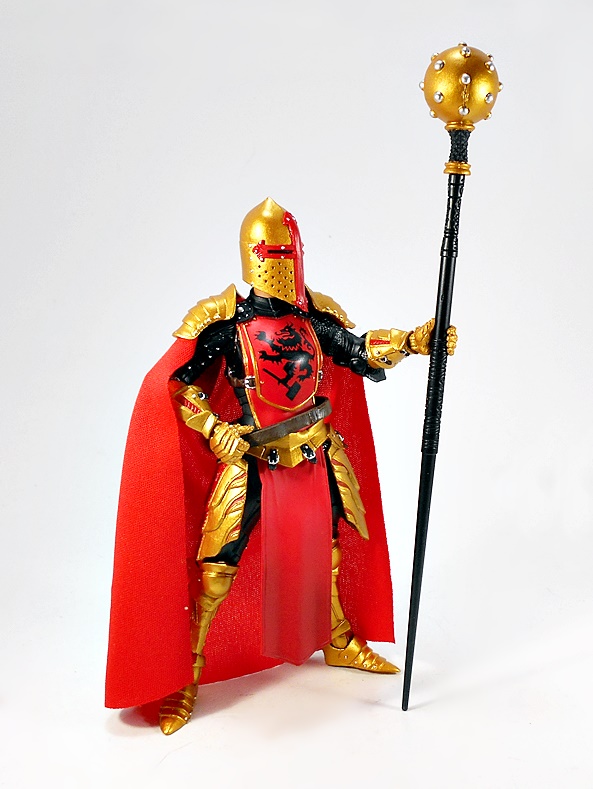 And before wrapping up, there’s one more weapon to look at, and it’s a big god-damned mace! The bulbous golden globe features silver studs perfect for bashing in the heads of anyone who dares cross her lord, Atilla. It’s mounted on a super long ebony shaft, making for some fine accessorizing and color coordination. I don’t know how effective this thing would be as a weapon, but it sure looks cool. Maybe it’s more ceremonial than intended for function. 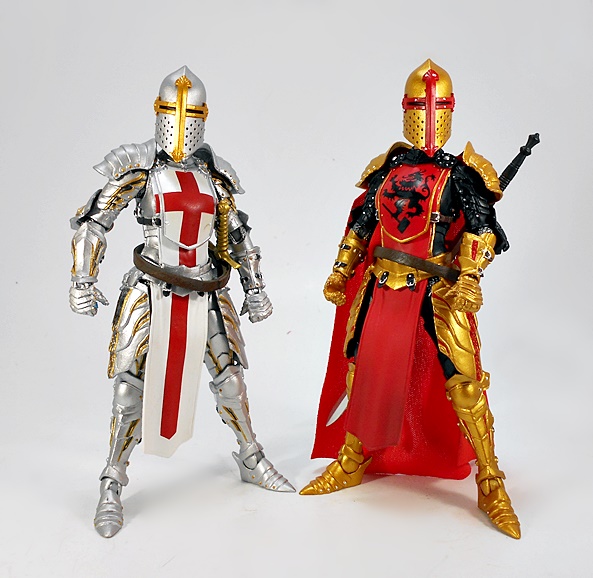 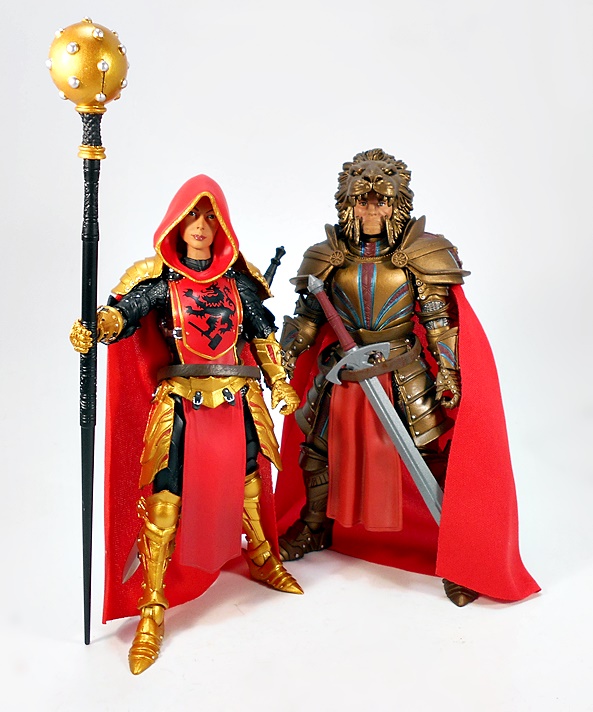 Every time I open a new Mythic Legions figure, I find myself falling in love all over again. Granted, I probably say that in half the reviews that I write for this line, but it’s definitely called for here, because I’ve been away from this line for so long. Opening and playing around with Faustia has made me want to dive head first into all those Advent of Decay figures left to be opened and reviewed. And maybe I’ll make a concerted effort to come back this way more often. At the very least I’d like to get caught up before the next assortment ships. Or even the one after that! But before backtracking, I’m going to try to get through the rest of Bjorngar in the next couple of weeks.

3 comments on “Mythic Legions (Siege at Bjorngar): Faustia by The Four Horsemen”