If you came around for Marvel Monday yesterday, I have to apologize for my inactivity. I mean, I know my content hasn’t been all that regular lately, but Mondays are usually non-negotiable. Alas, I spent the weekend getting drunk at the Medieval Faire and blowing off my hostly duties. Not that I’m apologizing. I really needed it. Anywho, here I am a day late and whipping up a fast review so I don’t fall any further behind. I’m keeping it in the Marvel Legends wheelhouse, but I’m also cheating a bit by looking at one of the roleplay prop-replica toys that Hasbro has been churning out now and then. I dipped my toe in this pool a little while ago with the Star Wars Black Series Stormtrooper helmet, and I was rather impressed. Let’s see if Hasbro can do the same for The Avengers!

The helmet comes in a fully enclosed box with artistic renderings of the toy that awaits you inside. The helmet itself comes wrapped in plastic and requires a little bit of assembly. The antenna pieces have to be snapped into place and the back cover has to be attached. Oh, and I’ll be coming back to that rear cover in a bit. The helmet requires three AA batteries (not included) to make the electronics work. These are installed by removing the mouth piece and using a screwdriver to open the battery case door. But as we’ll see in a little while, if you are fresh out of batteries, it may not be worth it to run down to the store to get some. OK, let’s get this thing out and see how it looks. Oh, by the way… I’m using a metal paper towel holder from Target as a helmet stand. 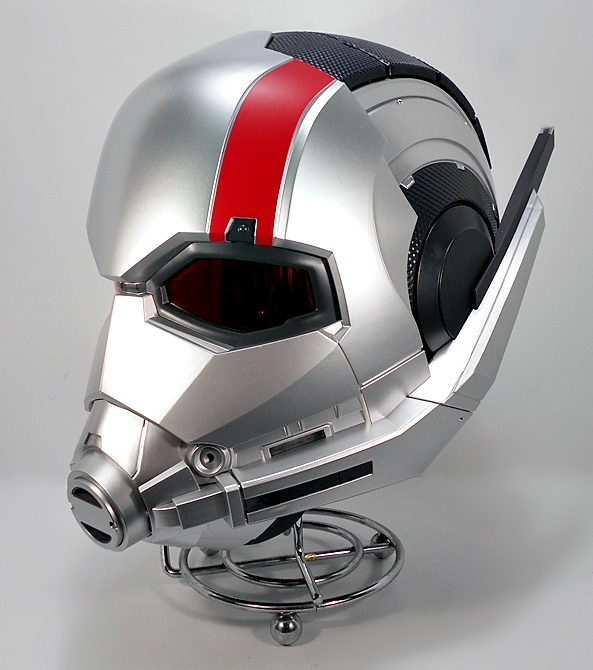 Out of the box, and I’ve got to say the helmet looks pretty damn great. The plastic has a nice, metallic silver coat that can pass for metal under the right lights. The sculpt is quite sharp, and while the design doesn’t feature a lot of hyper-detail, the toy has it where it counts, like in the mouth piece, the grommets around the eye lenses, and the panel lines. There isn’t a lot of call for paint here, as the helmet is mostly silver, but the red stripes coming up off the eyes looks bright and sharp, and the black pieces also have a solid finish that passes for metal. The eye lenses are thin plastic, and these pieces are the only area where the helmet approaches feeling cheap, but they are serviceable and look good. I just plan on being extra careful not to scratch them up while handling it. 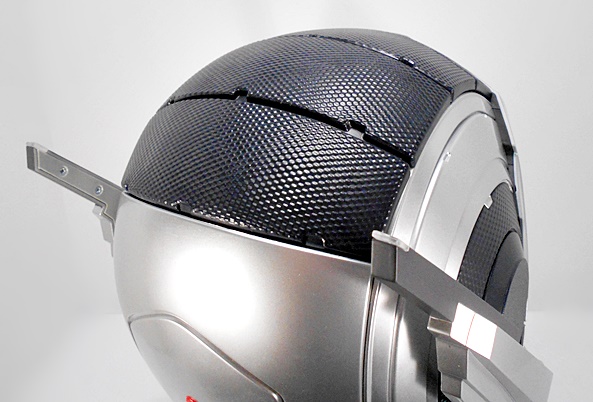 The antenna attachment connections are strong and firm. They don’t wobble or come apart with handling, although they can be disassembled if you want to store the helmet in its original box, which is always a plus for me. The ear discs feature a bit of a rough texture and the exposed area around it has a sort of honeycomb screen texture that looks like it runs under the layers of plating, even though it’s all part of the same sculpt. The top of the helmet features some more of the same screen-like texture.

That brings us to the back plate, which is without a doubt this helmet’s biggest flaw. The piece fits onto the helmet almost seamlessly, but it relies on two sets of fragile clips to attach to two fragile bars to work as a sort of hinge to hold it in place and allow it to pull open just enough to get the helmet onto the wearer’s head. None of this works. It’s extremely difficult to get the clips to do their thing and even when they do, they tend to pull out even at the slightest jostle, causing the whole back plate to fall off. Why they couldn’t have just used a few simple magnets to make this work is beyond me, but I imagine anyone who plans on using this as a cosplay piece will have to work out some kind of alternate solution to keep the back on.

Apart from that, the helmet fits even my meaty adult melon fairly well, even with my glasses on. I wouldn’t go so far as to say it’s comfortable, but it’s not too bad either. There’s a strap that holds it on the back of the head and there’s a dial which can be used to tighten or loosen the fit to some extent. The weight of the piece rests on a similar soft plastic headband that circles the top of the inside. The interior of the helmet is also fully sculpted with vents, and panel lines, and little bits and bobs to make it look like a real piece of tech. Not bad. 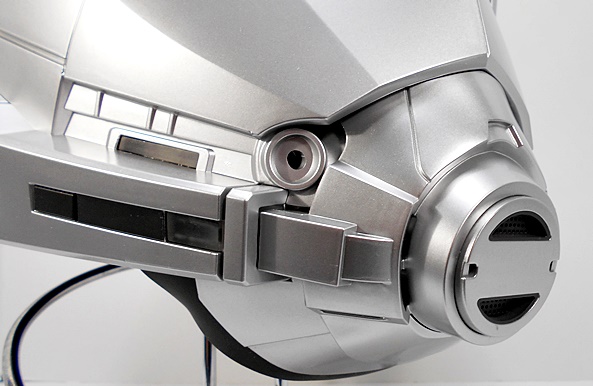 And then comes the electronics, which are definitely not worth the price of admission (and I’m talking the cost of three batteries, not the helmet!). There are no sounds, just lights, and they are depicted in the two pictures above in all their disappointing glory. Press the button on the right mandible and four panels on the mask light up red, as do the tips of the antenna. Press it again and they all light up blue. I can usually barely tell that the red lights are lit unless the room is really, REALLY dark. The blue lights fare much better, but they’re still not all that exciting. Now, I can’t really fault the lack of sound effects, because I’m not even sure what those would be, other than sound clips of Paul Rudd. But here’s an idea, why not light up the eyes? You know, since they lit up on the mask in the movie? Eh, whatever! 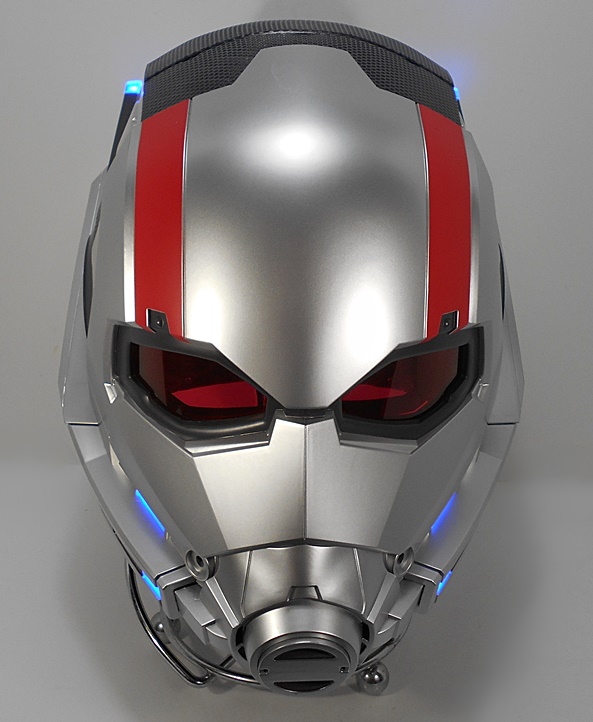 The Ant-Man helmet originally retailed for about $99 and that’s how much it was when I saw it on the shelf in Gamestop. I then proceeded to hop on my phone and buy it off of Amazon for about $60, and it still turns up at that price now and again. There’s no denying the rear panel is a faulty design and a huge misstep for such an expensive toy, but as I will be only using mine as a display piece, I can live with it. Sure, I would have liked some more impressive electronics to justify my purchase, but all in all, I’m pretty happy with this thing. It’s a pretty solid build, and it looks damn nice on the shelf. This thing isn’t likely to impress like those expensive Star Wars helmets, but for a Hasbro toy it looks damn fine on my shelf, and most people that take notice of it are surprised to learn it’s a toy when they handle it. I’ve been considering picking up the Iron Man helmet, or maybe even Cap’s shield, and despite this piece’s flaws, it has not deterred me.