Six episodes in and I am still enjoying the hell out of The Mandalorian. And I’m overjoyed that Hasbro has released at least a few action figures from these episodes. Sure, there’s opportunity for plenty more. Sure, I’m hoping Hasbro goes full guns on this series. But whatever happens, I’m still plenty happy with what we’ve got. Today I’m having a look at the Heavy Infantry Mandalorian who turned up in Chapter 3: The Sin.

I’ve got nothing new to say about the packaging, other than this box is a little wider than most Black Series packages, and that’s to accommodate the extra gear. And in keeping with tradition, we don’t know a hell of a lot about this character. Well, other than he seems like a real prick at first. He even picks a fight with the titular Mando, to the point where the vibro-blades come out, all in what seems to be mostly a case of misplaced jealousy. But in the end Mr Heavy proves that Mandalorians stick together when he jumps in to support Mando as he breaks bad with his employers.

What we do know is that this guy is an absolute bruiser and that his armor and gear (at least to me) step just a little bit closer to Boba Fett’s familiar armor. I think a lot of that comes from the helmet and the forearm armor. Unlike most of the other Mandos, this guy is armored up from head to toe with the sculpted under-suit really only showing in his upper thighs and his elbows. This guy has obviously proven himself, because his armor is so complete and in relatively good condition. Not to mention that with his heft, it must have taken a lot of that precious besker steel to outfit him. The armor itself is pretty smooth and simple with a mostly blue deco. The exception is in the brown kneepads, lower right leg, and left leg cuff. It gives him that slightly ragtag look, like maybe those are the last pieces he needs to upgrade when he gets his next big score. The forearms feature some nice detailing in the way of panel lines and gizmos, and he’s got a hefty belt with a number of brown pouches, each with painted snaps. The armor is rounded out with some sparing and effective silver brushed weathering, some of which is emphasized in the sculpt with pockmarks and dents. This is a great looking figure! 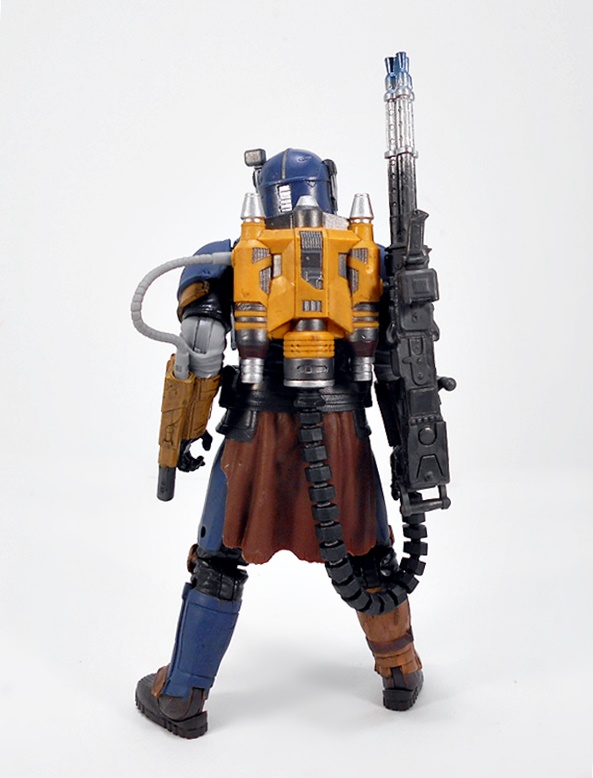 Of course, one of the big draws in this design is the weaponized jetpack, which looks passingly familiar to the one worn by Boba. This one lacks the central missile and seems to have beefier thrusters, but makes up for it by powering two pretty impressive weapons via two cables. The heavier segmented cable coming out of the right side attaches to his big gatling laser, somewhat reminiscent to the one worn by Baze Malbus in Rogue One. And I’ll come back to the gatling laser in a bit. 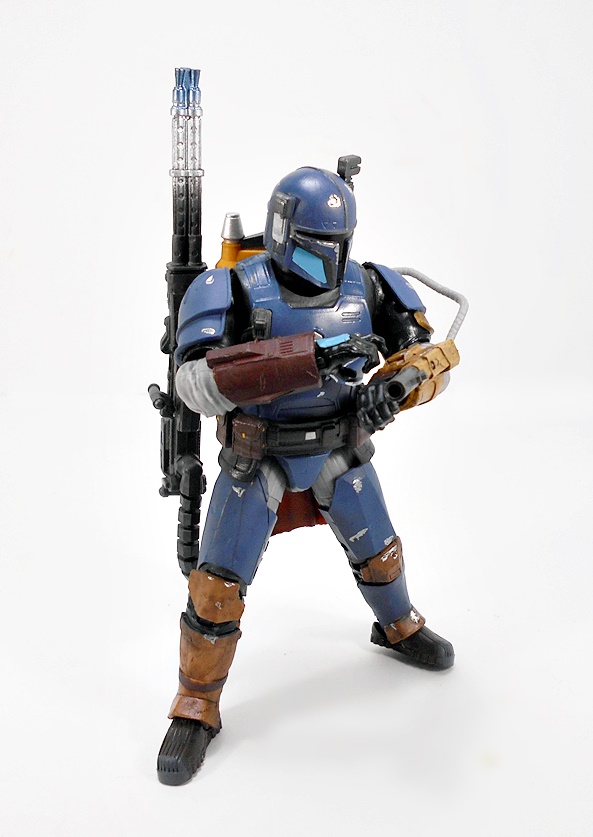 The smaller gray cable attaches to the weapon mounted on the left gauntlet. I haven’t re-watched the episode recently, but I don’t remember him actually using the gauntlet weapon, so I’m not sure what it’s supposed to be. Maybe just a big-ass flame thrower? That would be cool. 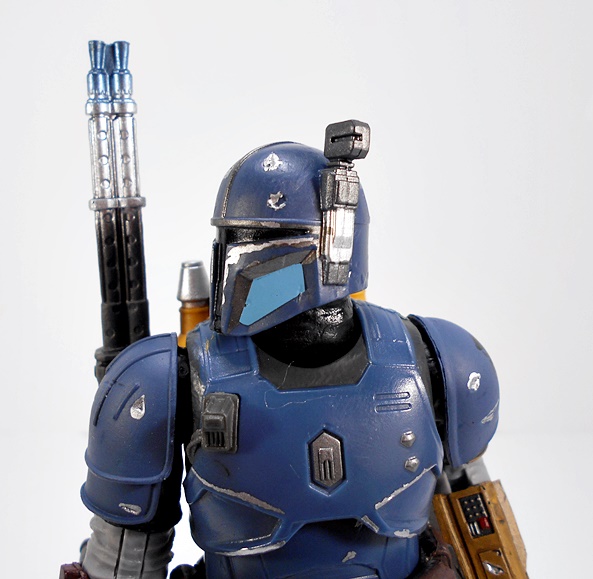 The helmet also strikes me as more reminiscent of Boba’s than the one worn by The Mando, but I think that has to do with the pock marks and the range finder. The helmet is mostly blue to match the rest of the armor, and features lighter blue paint apps for the “cheeks” and more of that silver brushed weathering. The range finder is on the left side of the helmet, is sculpted in place, and a lot beefier than the one on Boba’s helmet. I dig it! 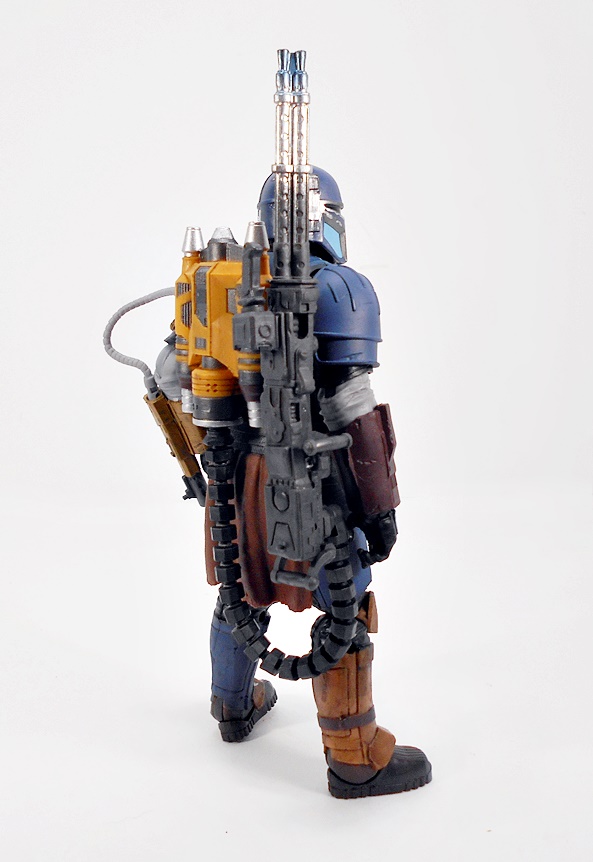 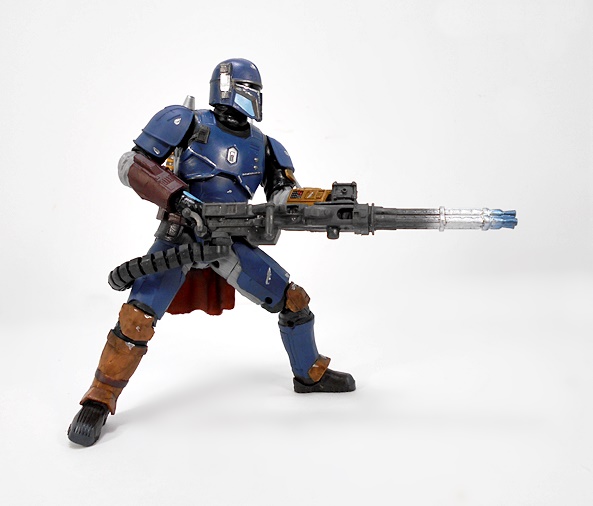 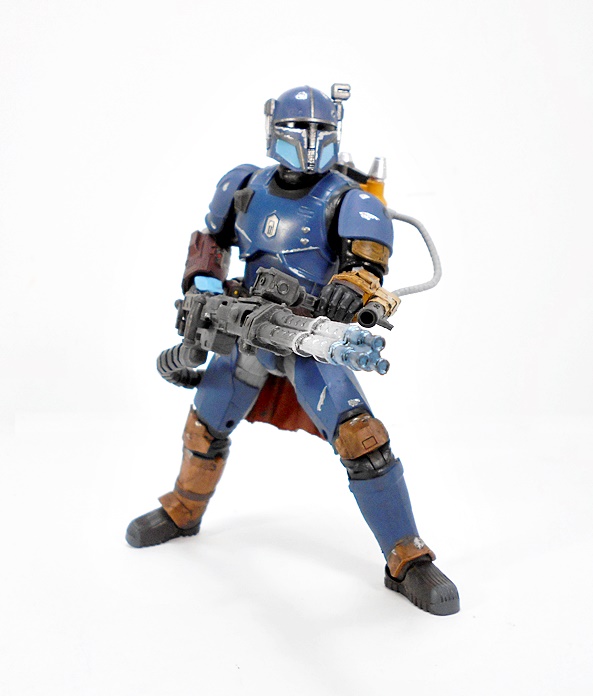 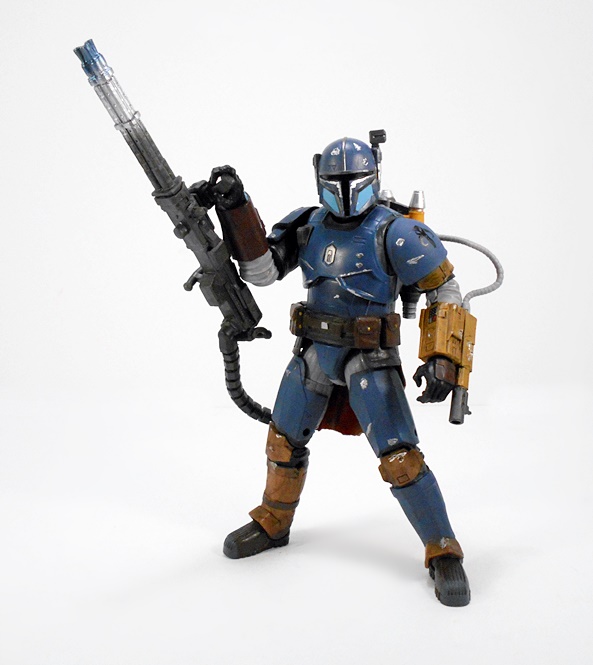 And how about that big-ass blaster! That’s how you make a statement! This beast of a weapon looks like the kind of thing that would be mounted on a tripod, but they don’t call this guy Heavy Infantry Mando for nothing. He’s up to the task to wield this thing like a champ. The weapon can be pegged into the side of the jetpack for storage, and I’m impressed that even with all this gear on his back, the figure has no problems standing up. The giant death stick is just packed with sculpted detail, has some beautiful silver and blue paintwork near the muzzle and barrels, and even features a swiveling hand grip on the top allowing him to hold the weapon perfectly in a number of firing positions.

Oh boy, do I love this figure! Naturally, it would be great to get figures of all the Mandalorians in the series, but if we only get one, I’m glad they went with this one. He’s an absolutely gorgeous figure from sculpt to paint, and his giant weapon and near perfect balance makes him loads of fun to pose and play with. And I’m kind of glad that he didn’t turn out to be a total asshole by the end of the episode. Will we be seeing more of him? Well, we don’t have many episodes left, so who knows? I can’t imagine how the writers will spend the last two episodes they have wrapping things up, but I’m excited to find out.