I couldn’t tell you exactly how long it’s been since my last Mythic Legions review, but I do know it’s been too long. That new wave (with the horsies!!!!) will be shipping before I know it, and I’m not getting any closer to being caught up. As memory serves I was still working my way through the Ogres introduced in the Siege of Bjorngar, so I’ll pick up where I left off by opening up the mighty Bolthor! 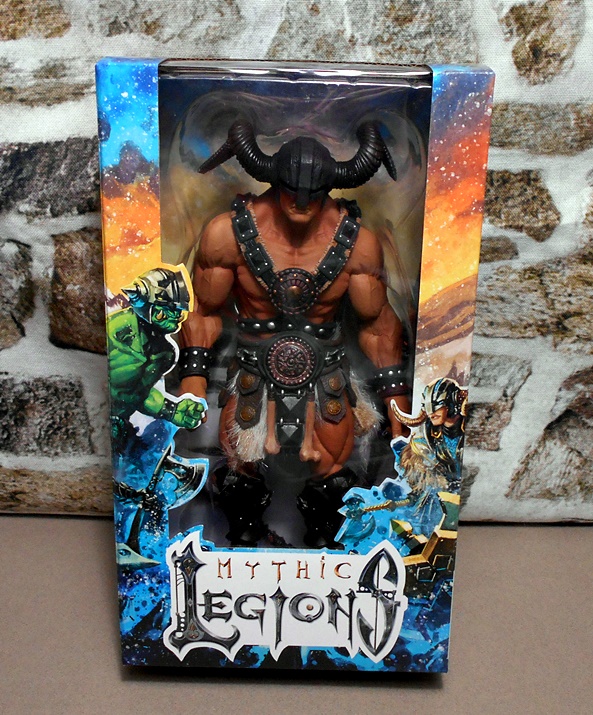 Yes, the Ogres were a brand new class of figure, somewhere between the regular-sized figures and the mammoth Trolls. They come in beautifully illustrated and collector friendly window boxes, which I probably won’t be keeping because I barely have space for all these figures let alone their packaging. And technically Bolthor isn’t really an Ogre, he’s a Giant! Well, actually he’s a Half-Giant! Wait, how are Half-Giant’s made? Do actual Giants (who are presumably much larger than Half-Giants) have sex with regular people? HOW THE HELL DOES THAT WORK??? Actually, I probably don’t want to know. From his little bio, Bolthor is said to be agreeable company as well as a powerful fighter, and he has aligned himself with the forces of none other than Attlus the Conqueror! Oh yeah, did I mention his nickname is The Tower?

One of the key factors of Mythic Legions’ staggering success has been T4H’s ability to repaint and recombine parts into brand new figures, and Bolthor here is a perfect example of that, only heavy on the repainting and not so much the parts swapping. Both his body and outfit are directly borrowed from both the Ogre Legion Builder and Kkurzog. The only change-up is that he’s wearing the optional simpler wrist bands that came with the Legion Builder and the disc in his belt is the design of the Legion Builder as well, as opposed to the skull insignia worn by Kkurzog. But basically, if you have those two figures, than you’ve seen everything The Tower has to offer, at least from the neck down.

And so, I won’t go into too much detail with the sculpt, because I’ve covered it twice already, but I will say that it looks as amazing as ever with this new deco. The skin tone has been changed from Ogre green to a tanned human flesh, which still brings out all the muscles, sinew and veins that are in the sculpt. Bolthor’s outfit has a bit more of a bronze motif, and I’m still impressed by detail work in his harness. The plates on have individually sculpted and painted rivets, the straps have realistic leather texturing, and that elaborate belt remains a masterpiece. Each “leather” strap has a detailed bronze medallion, the bones look great, and the whole ensemble is worn above a furry barbarian diaper. Bolthor’s lower leg armor is colored the same as Kkurzog’s and still consists of the crude and jagged Orc-style armor with some kind of horns or teeth embedded in them. Unlike Kkurzog, who went barefoot, Bolthor has the heavy boots worn by the Ogre Legion Builder.

The head sculpt is brand new, with Bolthar wearing a helmet that only exposes the lower half of his face. His human-like visage has a pronounced chin and chiseled features. His down-turned mouth makes him look like he’s determined to hit something with a tree. The helmet is painted and textured to resemble iron, with plenty of pitting and cracks incorporated into the sculpt, and he has black ram horns protruding from each side.

Unlike the big Trolls, which were roto-scoped, mostly hollow, and had more limited articulation, the Ogre body is built with the same articulation as the regular figures, in other words lots of rotating hinges. That makes these fellows highly poseable and pretty damn hefty too. T4H have been including warnings with these figures about the joints possibly being brittle and snapping unless they are carefully worked out. I haven’t really had any difficulties in that area with any of mine.

The weapon is a repaint of the poleaxe that came with Ogre Legion Builder, and here’s my only real gripe about this set. Seeing as how the three Ogres from Bjorngar recycled so many parts between them, it would have been cool to get unique weapons with each one. Plus, the shaft on the axe looks a little dainty for such a big guy. With that having been said, the axe is still a gorgeous sculpt with some nice copper paint accents. I also dig the ability to change up the pole and make it shorter or longer. 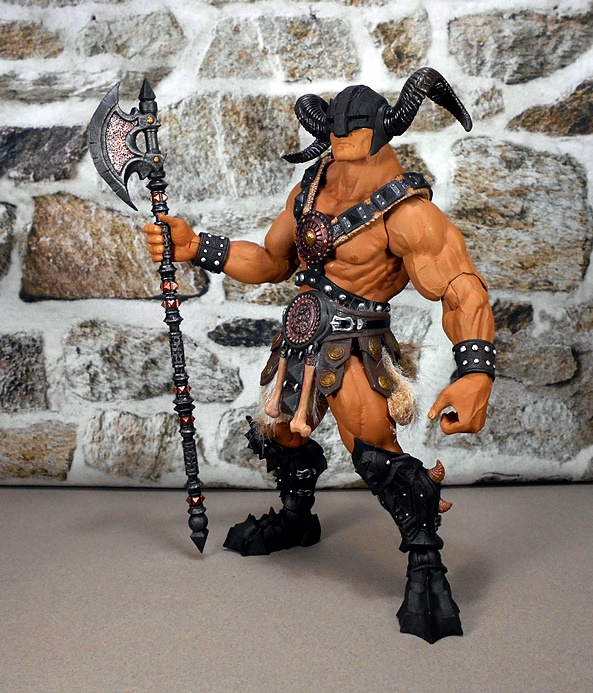 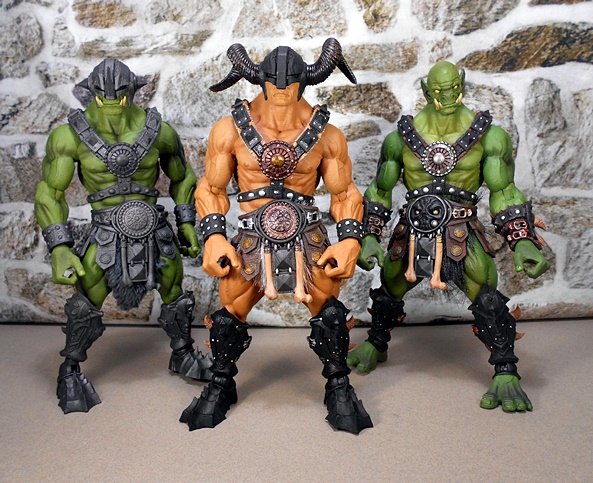 I’ve been impressed with this new class of figures ever since I opened the first, and that sentiment has yet to wear off. Bolthor is probably even a little more exciting because the two Ogres were a lot more similar to each other and Bolthar at least feels like something new. And it’s cool to add such a heavy hitter to Attlus the Conqueror’s Wasteland Army. And I’m still not quite done with these big guys. Not yet. Next time I revisit Mythic Legions, I’ll check out the last of these fellas with Argemedes, an Ogre sized Cyclops from the Wasteland assortment. And then maybe I can get back to opening some of the regular sized figures again!