After a brief detour to check out Klaue from Black Panther, I’m back to working my way through the Banner Hulk Wave. And with four figures under my belt, I’m more than halfway done! And here’s where the character selection in this wave really starts to descend into a free-for-all. There’s no theme or anything, just a semi-random assortment of characters here. Today we are having a look at The God of Mischief… Loki… And it’s a very classic comic version!

Even if you take into account how far behind I am in my reviews of this line, it still took a long time for Hasbro to get a comic-based Loki figure out of Modern Legends. I mean, I’ve got at least two MCU versions of him (only one of which I’ve reviewed) as well as the female Loki from the A-Force set on my shelf at this point. Nonetheless, he’s finally here and about as classic a version of Loki as anyone could ask for. Even the packaging window cannot contain the magnificence of those horns! And just a reminder, that Hulk leg went to my nephew, so I won’t likely be reviewing the BAF in this wave. I guess that makes me a good uncle, and a bad toy blog host.

Yup! For all the fans who discovered Marvel through the movies, and you’re just into Marvel Legends for the MCU stuff, Loki here is going to be like a bucket of cold water. He’s pure comic cheese from the early days but if you’re looking for some Jack Kirby goodness, there’s a lot to love here. On the other side, Hasbro played it pretty of lazy with this figure. There’s absolutely no character-specific sculpting to be found on the body, instead his costume is achieved nearly entirely by paint and colored plastic. His boots and gauntlets are yellow, his body suit is green, and the gold scales that make up his undies and run up through the center of his torso, are all painted on. Now with that having been said, the coloring on this figure is absolutely gorgeous. The green and yellow go so well together and the gold gives it that extra little pop. 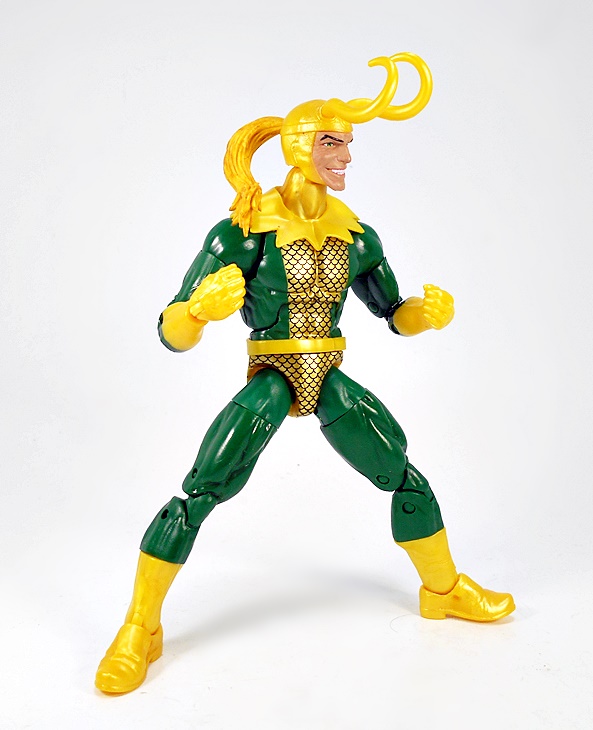 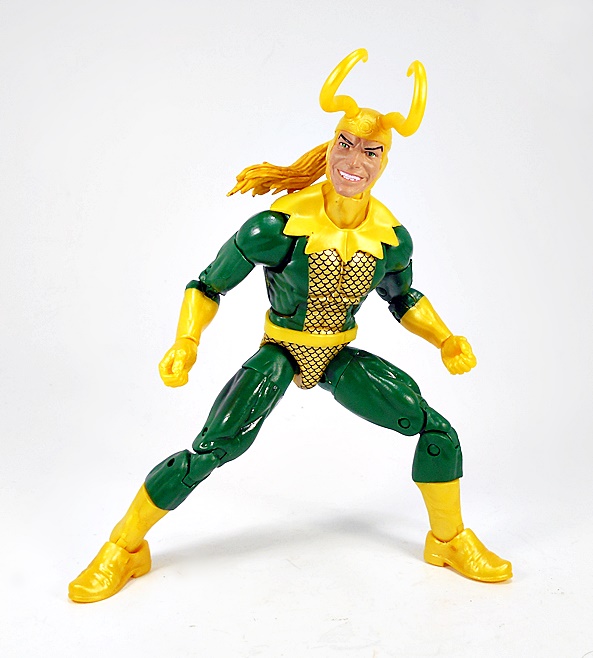 You do get two separate pieces of fresh sculpting: His plain band of a belt and his starburst-like gorget, as final accent to the body. So, clearly this is one of the wave’s budget figures, and I’ll be the first to admit that the paintwork looks fine, but this is Loki, dammit! He really deserved more original sculpting. We’ve seen Hasbro’s sculpted scale mail on figures like Green Goblin, and I think that sort of thing would have looked great if applied here. I must be misremembering him wearing a cape with this costume, but to be fair this one is even way before my time, but it was still a design that I can remember seeing now and then in my childhood. Since this is a basic buck, there are no surprises in the articulation, so I won’t run down all the points, but I will point out that this body features the swivels in both the thighs and tops of the boots.

The head sculpt gets major props from me for Loki’s maniacal grimace and overall devilish expression. Hasbro does enjoy injecting their comic villains with tons of character and Loki is another great example of that. He looks absolutely deranged! His form-fitting cowl features his trademark horns, protruding proudly from his forehead and curling upwards. Meanwhile, his golden locks spill out the back in a long ponytail. The only downside here is I worry about those horns getting all warped. With over 300 Marvel Legends figures, I wind up having to rotate a lot of them in and out of display, which means Loki here will spend part of his life in bagged in a storage tote. Needless to say I have to make sure he resides at the top of the heap to keep those horns from going all wonky while in storage. 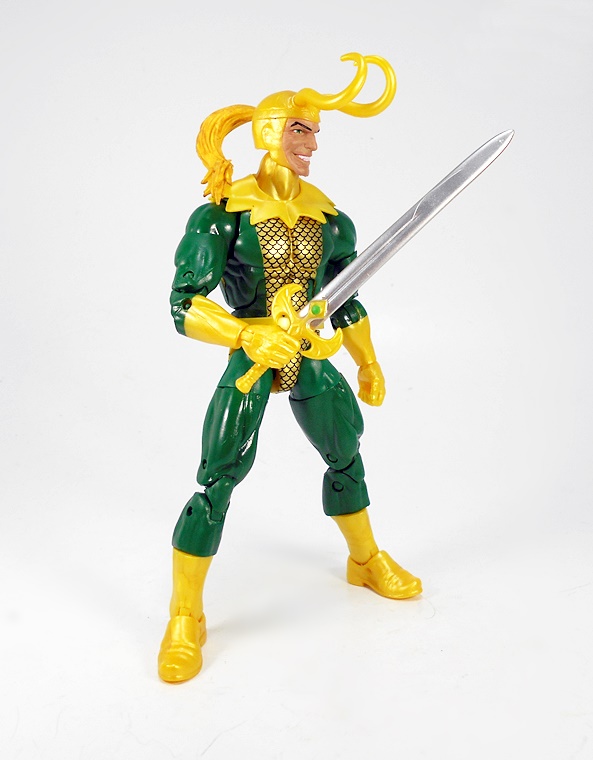 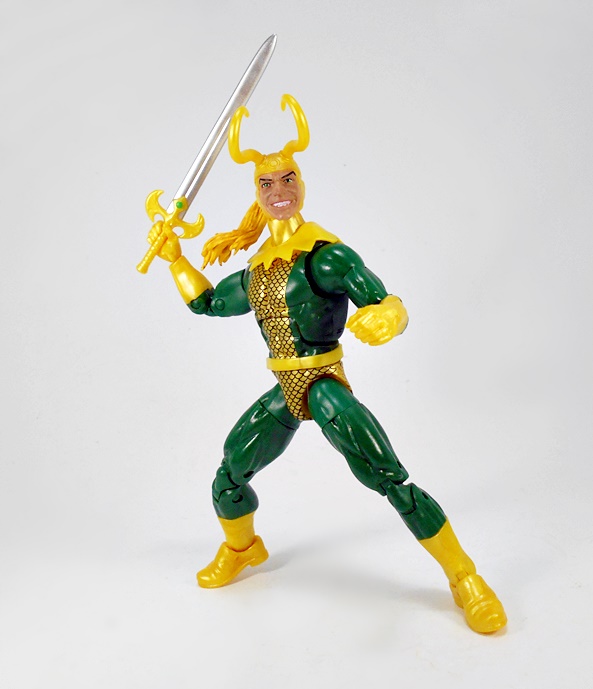 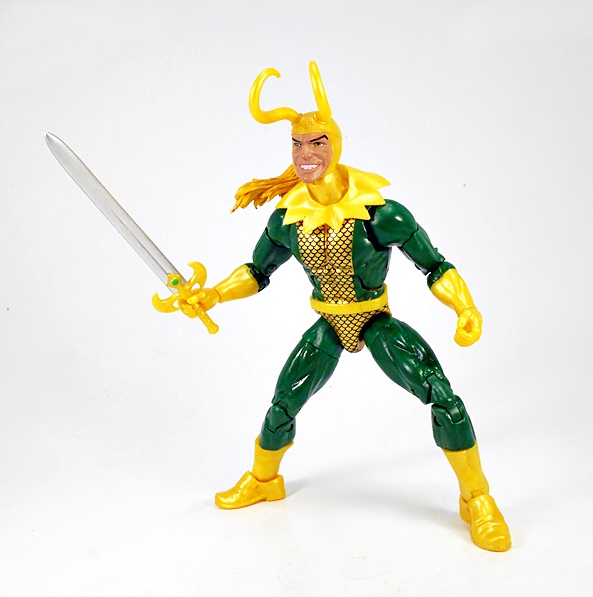 The God of Mischief comes with one accessory and that’s his sword. Yup, while the modern Loki favors daggers and throwing knives, old school Loki wielded a more conventional blade. It’s a great looking weapon with a yellow hilt, an extended grip, and a cross-guard that kind of resembles a bird stretching out it’s wings. The guard reaches up the blade just a bit and has a green gem or stone painted on it. The broad blade is painted silver. I thought this looked familiar, and a little searching reminded me that it’s a repaint of the sword that was included with Angela as part of the Titus Wave. 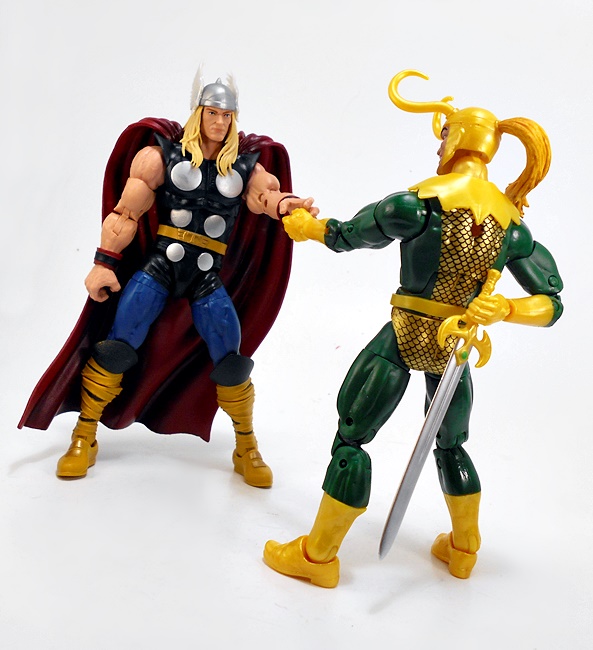 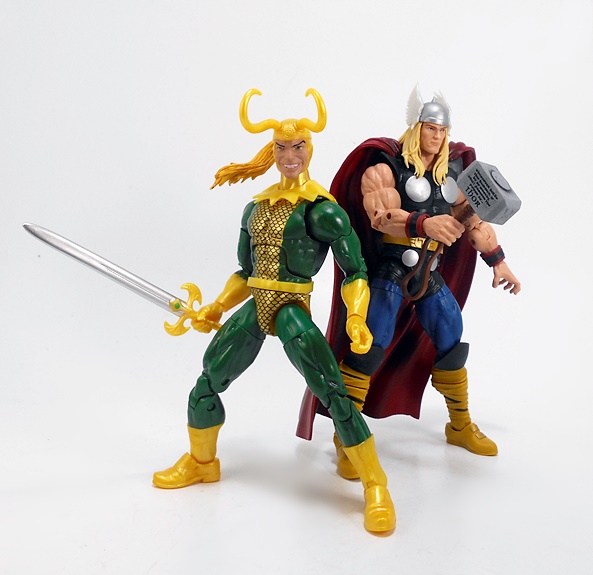 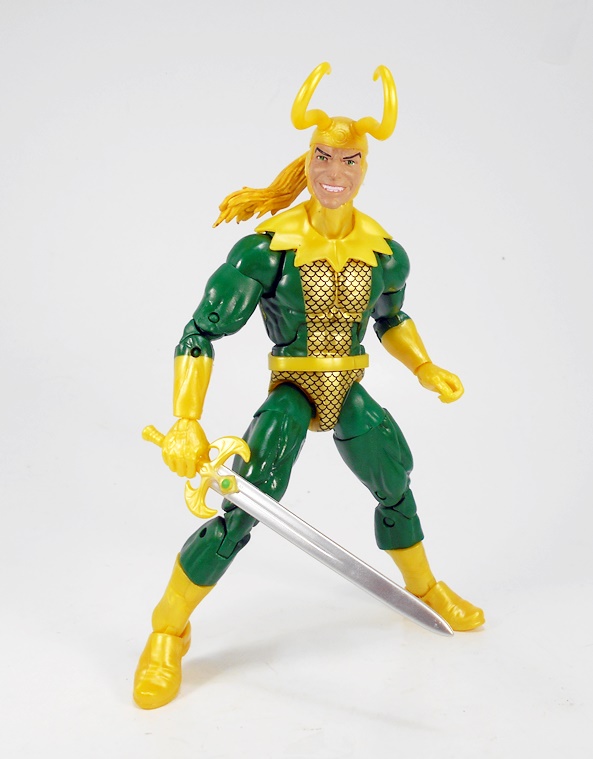 After all this waiting for a classic Loki, I find myself a little underwhelmed with this figure. He’s not a bad figure, quite the contrary, I think he looks great. But a figure as important as Loki should have had more attention. It’s doubtful that Hasbro will take a second crack at this version of him any time soon, and I think that they should shy away from using A-Lister characters as the budget figures in a wave. But with that having been said, I still dig him a lot and he looks fantastic displayed alongside the 80th Anniversary Thor.