I don’t like to piss in other people’s Raktajino, but it’s hard for me to think of anything more depressing than CBS’s vision of modern Star Trek. But in an effort to practice the optimism of Gene Roddenberry, I can say that it has given me a new appreciation of some of the past Trek series that didn’t always get my full attention. For example, I always liked Enterprise, but in recent re-watches, I’ve come to actually love it. And after re-watching a few great episodes this week, I thought I’d have a look at another one of Eaglemoss’ larger XL ships: The Enterprise refit! 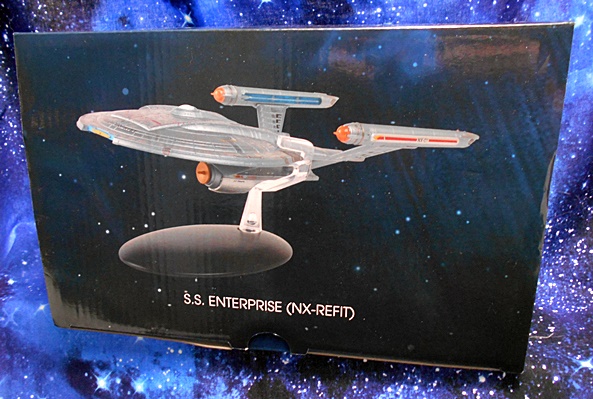 The SS Enterprise comes in a fully enclosed box and sandwiched between two styrofoam blocks. The only assembly required is putting the stand together. But what’s this you say? This isn’t the Enterprise from the series? Correct! This refit was intended to represent the eventual evolution of this Warp-5 ship design. As the included magazine details, the NX-01 was originally designed with this refit in mind, so that it could be easily integrated when the time came. Maybe in Season 5? But sadly it never happened in the show. Nonetheless, it shows how perfectly the ship’s evolution would lead into the Constitution Class from The Original Series. 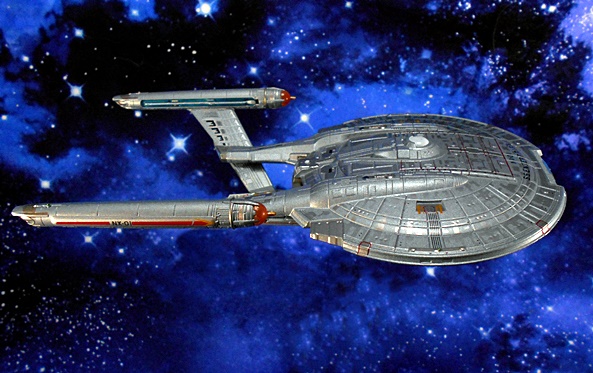 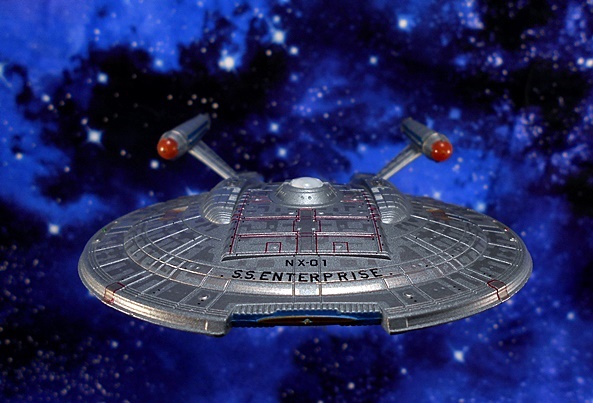 The XL indicates that this beautiful ship is one of the big boys. These special editions are more than twice the size of Eaglemoss’ regular ships of the line, allowing for more detail in the sculpt and paint applications, and I have to say everything about this model came together brilliantly. It’s given a pewter-like finish that nicely reflects the rather distinctive coloring of the NX-01’s hull in the series, while still maintaining those subtle, but oh so lovely, aztec patterns, which were introduced in the motion pictures. Furthermore, the sculpted detail on this ship is positively off the charts. From the panel lines to the tiny windows and ports, the sculptors did a phenomenal job taking every advantage of this model’s larger size. And one of the coolest things about this refit design is that the ship can still be viewed from certain angles without being able to tell it’s the refit. That’s how seamless the design incorporates this change. But view it from the right sweet spot, and the projected lineage of this ship is clear! 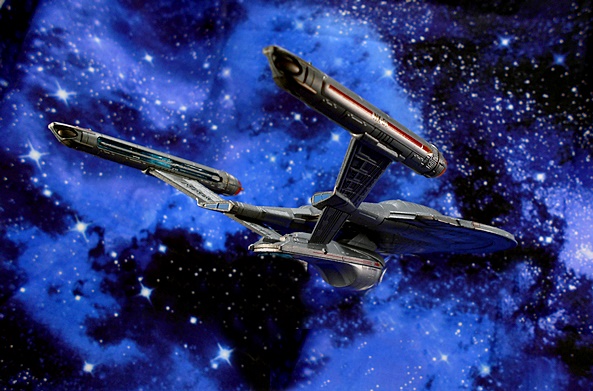 So, what’s new? Well, the most obvious is the addition of a secondary hull similar to what we would eventually get in the Constitution Class. Here it’s a little atrophied in comparison to what would come, and it’s nestled a bit more directly under the saucer. As one might imagine, this addition adds a tremendous amount to the ship’s power capabilities, crew compliment, and additional systems. Besides the neck attachment to the saucer, the secondary hull component is also supported by extending the warp nacelle struts further down and into it. It all looks so natural, and indeed the only thing about this design that I find peculiar was the decision to retain the deflector dish on the hull when a larger one dominates the front of the new drive section. Maybe it was just not worth the effort of removing it, and it could stand to serve as a replacement if the new one gets damaged. 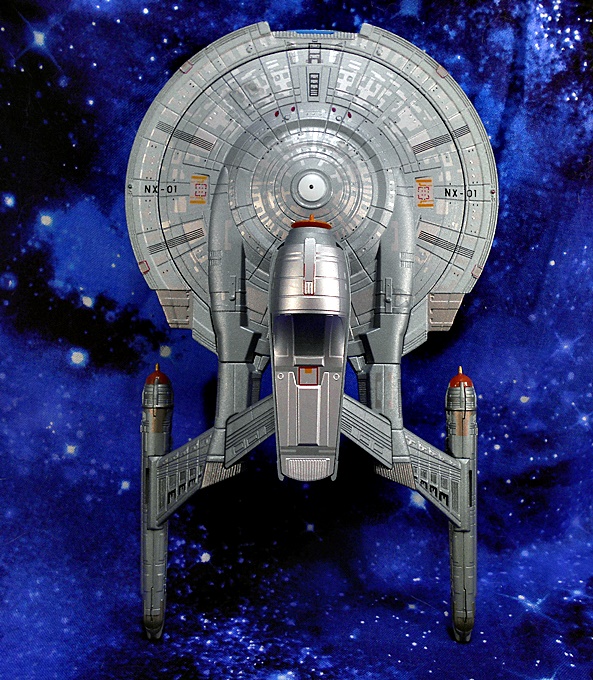 Let’s take a quick spin around some of the more stand out points of interest on the ship. There are some sharp paint applications worth noting, especially the red wireframe that begins at the two forward phase cannon hatches and extend back to just behind the bridge dome. You also get some yellow and red paint on the cargo loading hatches positioned to the port and starboard of the bridge. The deuterium resupply assemblies on those twin humps are painted in a slightly more copper finish, and of course the registry NX-01 and SS Enterprise is printed neatly on the dorsal front of the saucer. The flipside of the saucer is every bit as detailed. 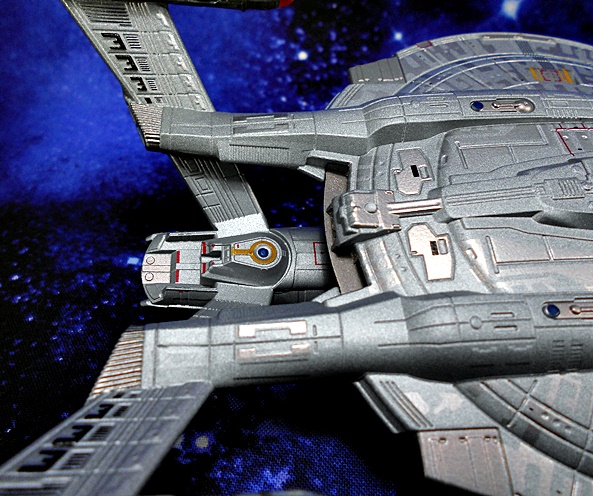 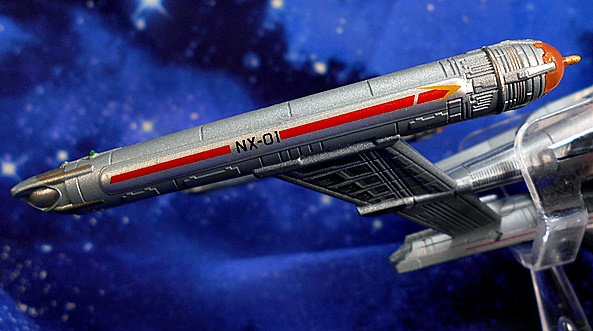 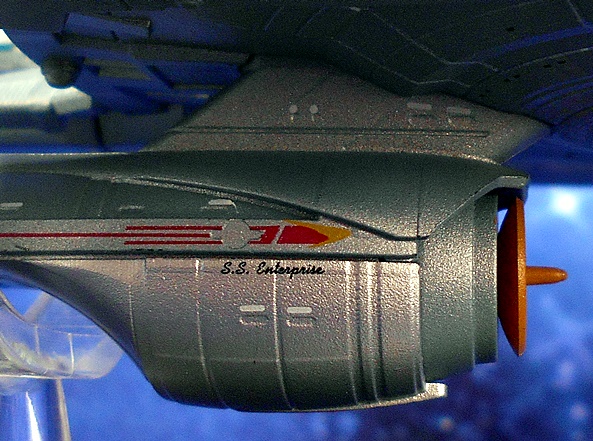 Moving elsewhere, I love the paintwork on the nacelles, where you get the registry at the center of a red racing stripe, which terminates in an orange delta at the front. The interior nacelles feature some translucent blue plastic and the bussard assemblies are molded in translucent orange plastic and have the cool points coming off of them. The broadsides of the secondary hull have the three pronged racing stripes terminating in the orange delta, and the SS Enterprise printed in cursive script is really damn cool. I will note that the secondary hull has a bit less detail than the rest of the ship. I’m not sure if this was intentional, or just because this piece was designed off of something with less reference material. Either way, I don’t think it hurts the model at all. The I think if I have one nitpick on the model, it would be the new deflector dish, which looks a little too plasticy and low-detail when compared to the rest of the ship. Then again, it does give it a bit of that retro-charm of The Original Series Connie Class.

As always, this ship comes with a display stand, which features a heavy black metal base and a translucent armature that grabs the model behind the saucer and lovingly cradles it for your viewing pleasure. I also dig that they went for an understated look for the base, rather than go a gimmicky route and making it a Delta insignia. I think this design just looks more classy and doesn’t detract from the model itself. These display stands really do feel premium, complete with a felt pad on the underside. Would it have been cool to put a name plate on the base? Hmm… maybe. I suppose the name and registry on the hull does that job well enough. 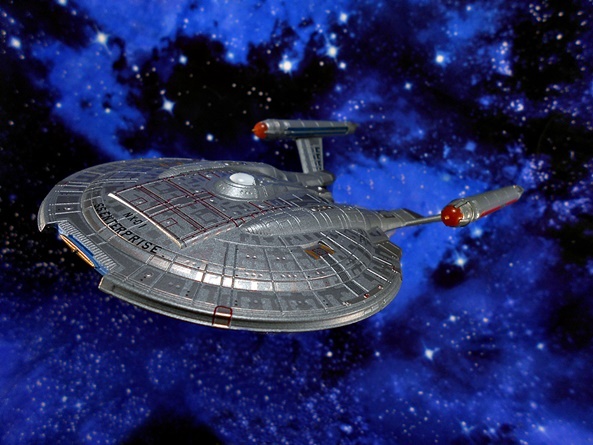 I absolutely love this ship! Funny story, but I actually ordered this one online thinking it was the regular NX-01 from the series. When I got it, I was surprised to find otherwise. For a moment, I was tempted to send it back, but I wound up opening it and falling in love with it. I really wish they had upgraded to this design in the series. It actually would have made sense right before the Xindi Excursion, and it’s a shame that we’ll never see this baby in action on the screen. It really would have threaded the needle from this prequel series to The Original Series. But at least I have this kick ass model of it, and she sure does look nice lined up on the shelf with the other ships of the line!