In case you missed it, Hasbro is celebrating the 10th Anniversary of the Marvel Cinematic Universe by going back and releasing some figures of characters they missed the first time around. A few weeks back I checked out the Captain America and Crossbones set from Civil War and today I’m turning my attention to Ronan from Guardians of the Galaxy. [Insert polarizing opinion about James Gunn controversy here]. 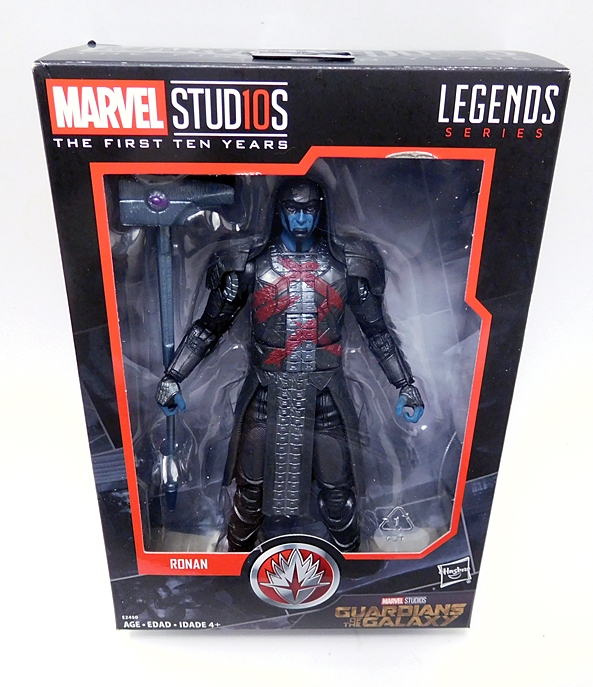 The First Ten Years releases run the gamut from single packs to two-packs, and even some three packs. Whatever the case, they all come in window boxes, which have been re-branded to help them stand out from the regular Marvel Legends releases. The corners are all squared off and you get a new deco and Marvel Studios logo. Back when Hasbro was doing figures for the first Guardians film, I thought omitting Ronan figure was a huge oversight, and I’m extremely happy that Hasbro is rectifying that now. So let’s get this Kree accuser out of the box and check him out. 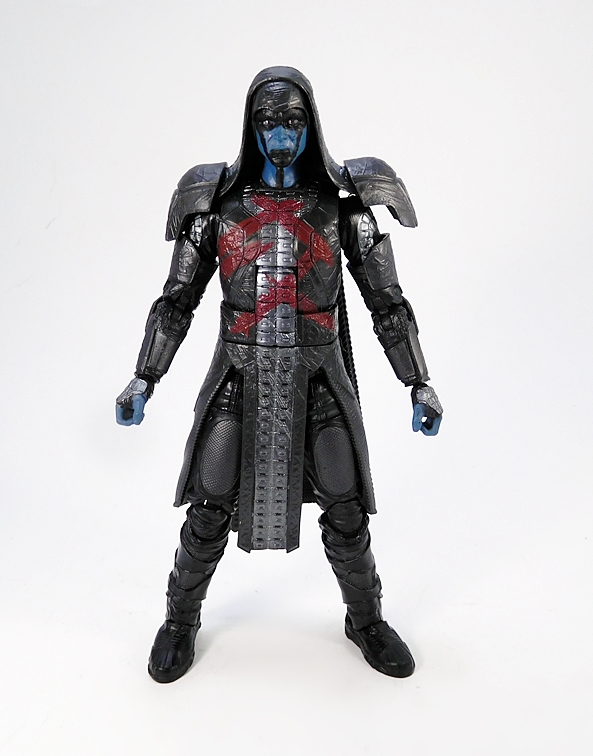 And wow, what an amazing sculpt this is! Ronan’s Kree battle armor gave the sculptors at Hasbro a rich canvas to work on and they did not disappoint. Every tiny facet of the armor is realized in full detail. His coat is sculpted as part of the torso and extends down past the waist as a separate soft plastic piece, which hangs around the legs, and it’s all pretty convincing as one garment, save for the cut for the waist swivel. The coat features a grid of segmented armor pieces, almost like scales, which forms a strip running straight down to between his legs. In other areas, some of the armor plates have cool vein-like wrinkles sculpted into them, suggestive of some kind of weird alien forging process. 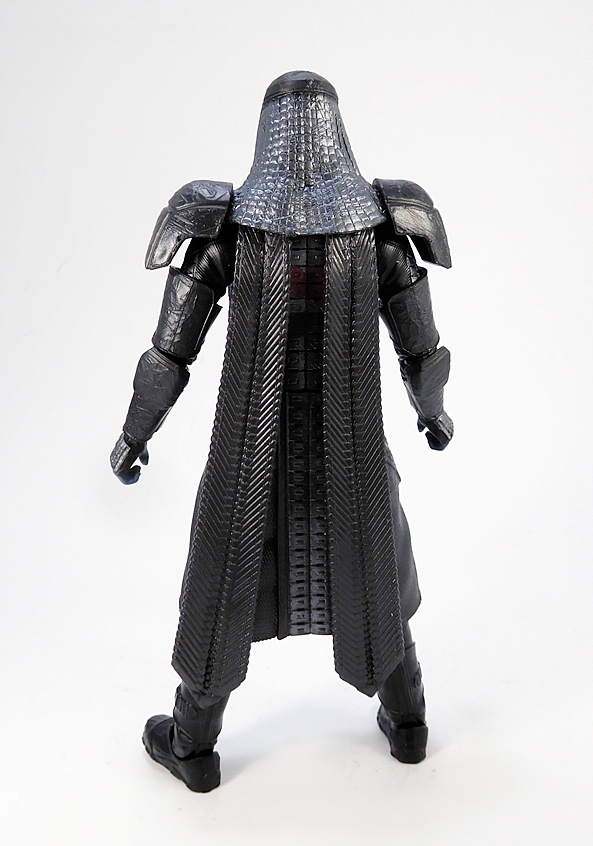 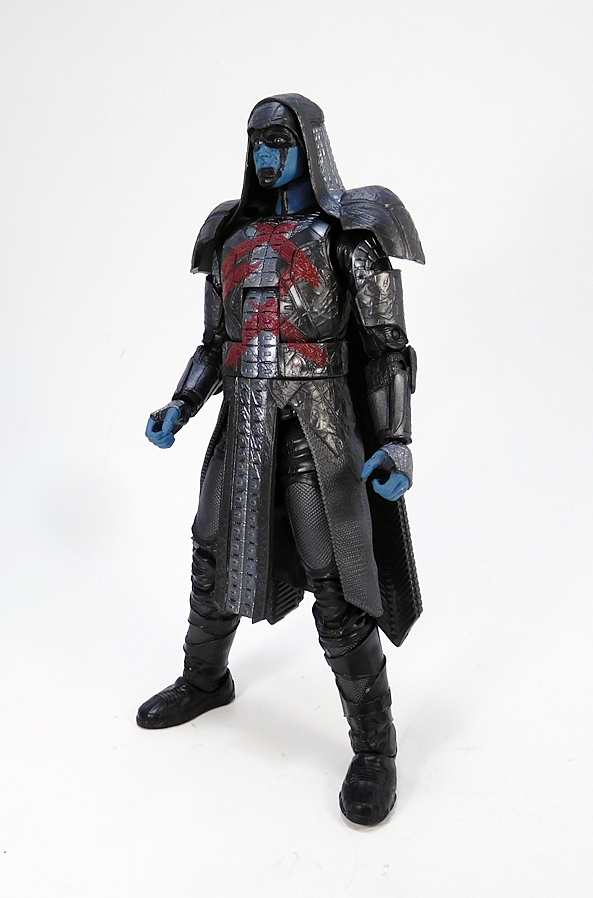 I really dig the super-fine texturing showing in the lower part of the coat, also seen on some of the leg panels. It looks like some kind of micro-chain armor. There’s also some very fine ribbing in the joints around his underarms. Two strips hang down his back with, like two thin capes, each with an intricate pattern, like a techno-snakeskin. While the coloring here is fairly drab, you do get a nice mix of dark gray metal with some silver, as well as swipes of red forming a pattern on his chest that looks like war paint. Obviously, the MCU figures give Hasbro a lot more to work with when it comes to detail, and I think Ronan here may be one of their most intricate sculpts yet. Pair that with the excellent coloring and this is quite simply an amazing looking figure. 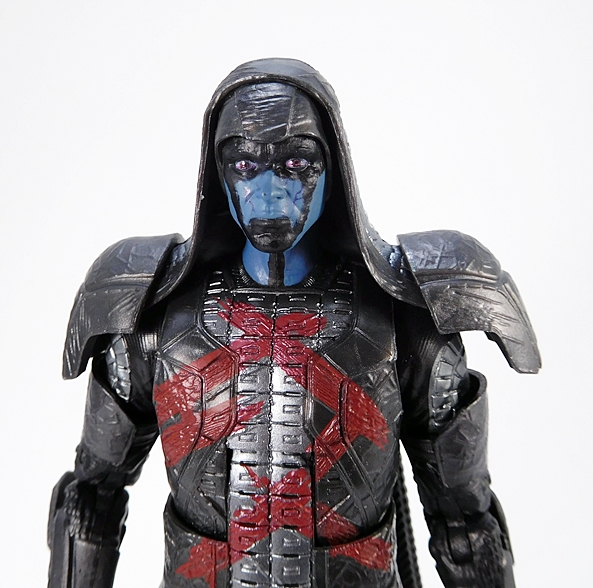 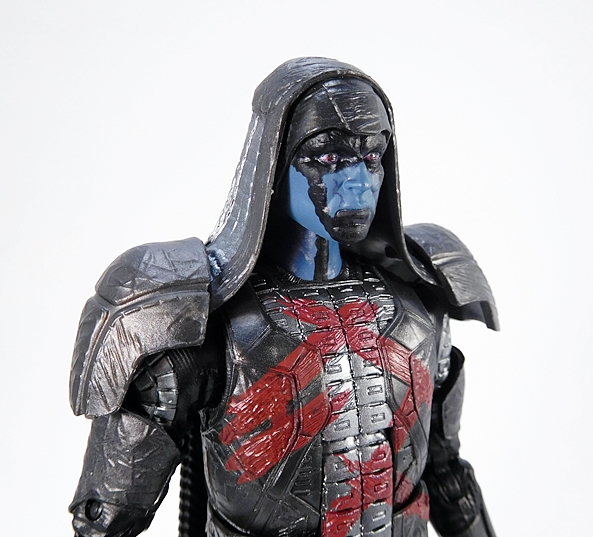 The portrait is no slouch either. Not only is this a solid likeness, but the glossy paint they used for his eyes give him a slight spark of life that I don’t recall ever seeing in a figure in this scale before. He does have some blue veins painted in on his face, which I don’t remember seeing on him in the film, and also the black warpaint around his eyes and mouth. And just in case you thought this review was going to be nothing but me gushing, here’s where we get into some problems… 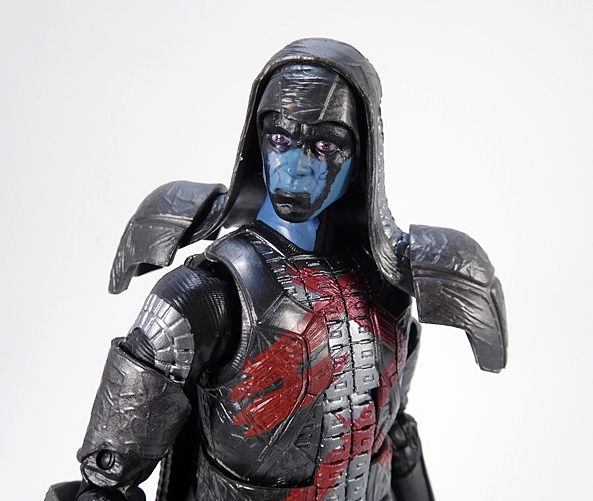 The soft plastic hood is permanently attached to the head and so is the shoulder armor. Yup, when you turn Ronan’s head, his shoulders turn with it, and this is a terrible design. It’s not too bad if you just tweak his neck articulation, but if you want any significant amount of head turn, it just looks so awkward. I get it, the design features the hood running under the shoulder plates, but here’s where I would have been OK with some creative license on Hasbro’s part. They should have attached the shoulders to the torso via soft plastic connectors and just shaved a little bit off the hood. As things stand, his neck articulation is useless unless you want his shoulder armor levitating in mid air. What a shame. 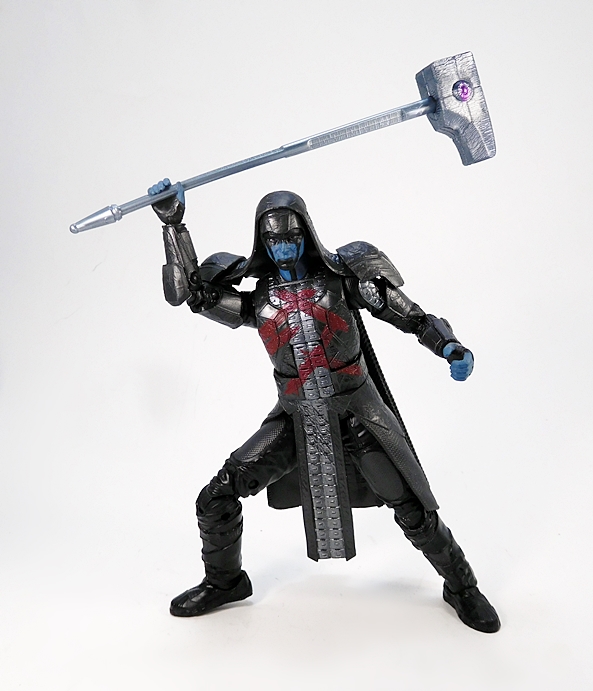 As long as we’re on the subject of articulation, let’s run down the points. The legs are ball jointed at the hips, double hinged at the knees, and have swivels in the thighs. The ankles are hinged and have lateral rockers. The arms have rotating hinges in the shoulders and wrists, double hinges in the elbows, and swivels in the biceps. The torso features an ab-crunch hinge and a swivel in the waist, and lastly the neck is both hinged and ball jointed. It all sounds fine on paper, but in reality there are a few issues. . First off, the ab-crunch hinge on my figure is extremely loose. It will hold most positions, but it feels all floppy. Second, the lower half of his armor coat does inhibit the leg movement quite a bit. And finally, those shoulders don’t work well with his arms raised over his head. As great as this figure looks, I can’t say he’s all that much fun to play with. I was struggling just to come up with different poses for pictures. 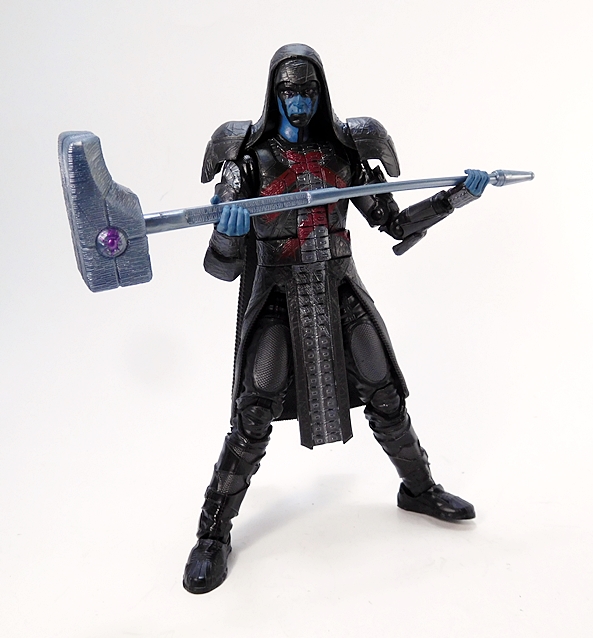 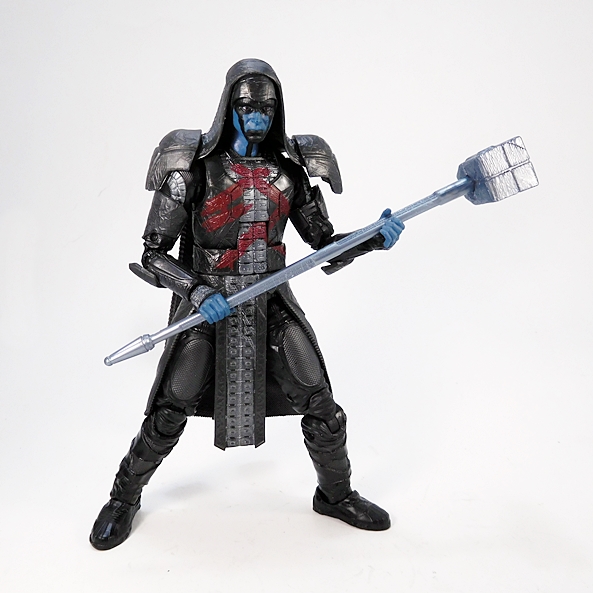 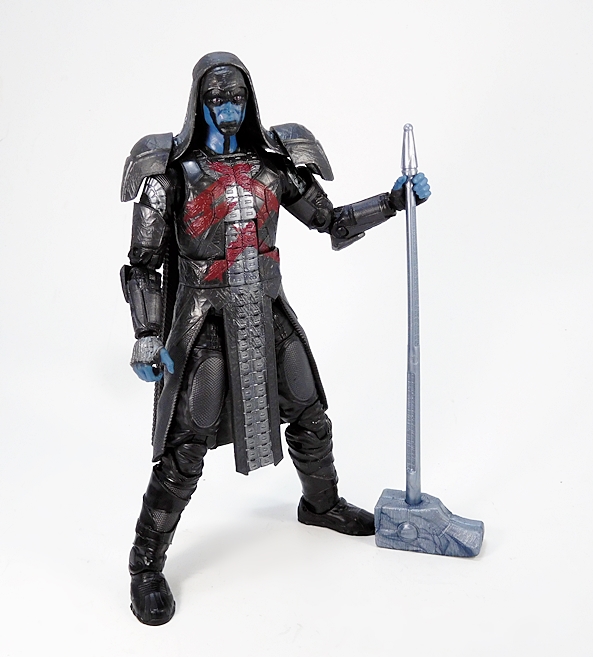 Of course, Ronan comes with his hammer and it’s a decent enough accessory. It’s cast in gray plastic and there’s some nice swirly effects in the head. The shaft even has some sculpted detail. It even has the glowing purple Infinity Stone centered in its head. Ronan’s hands are sculpted so that he can hold it in either hand, or both. 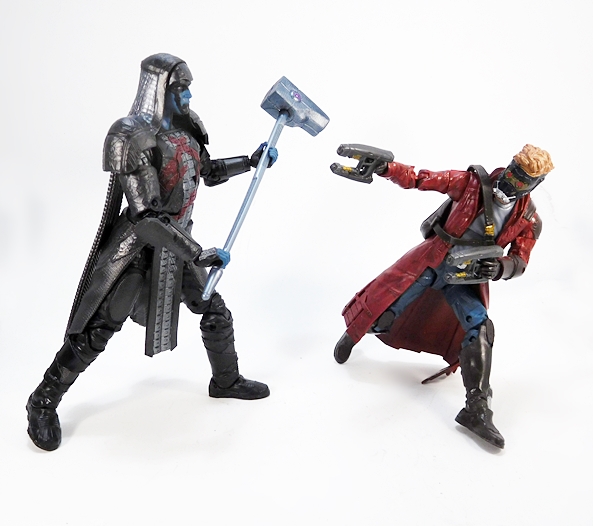 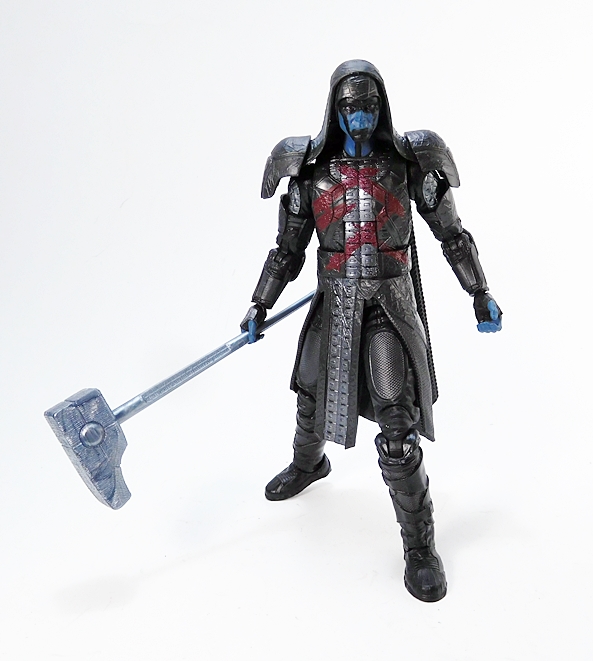 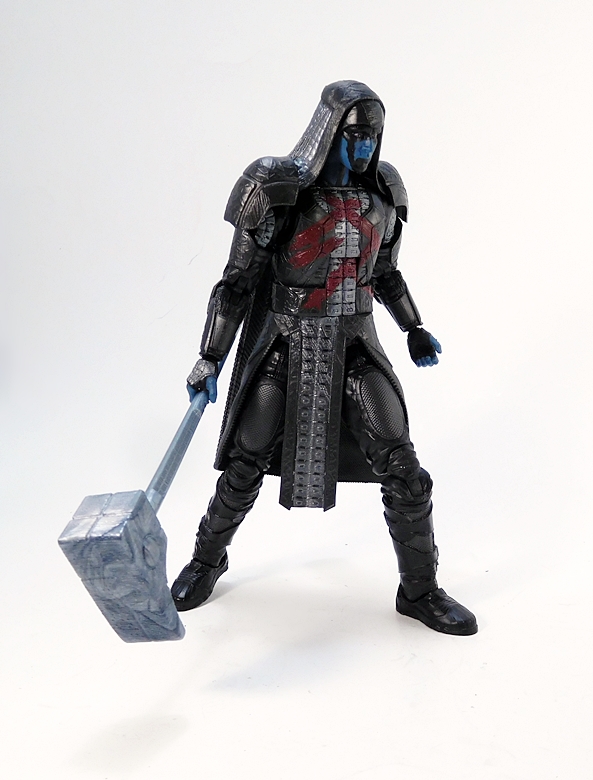 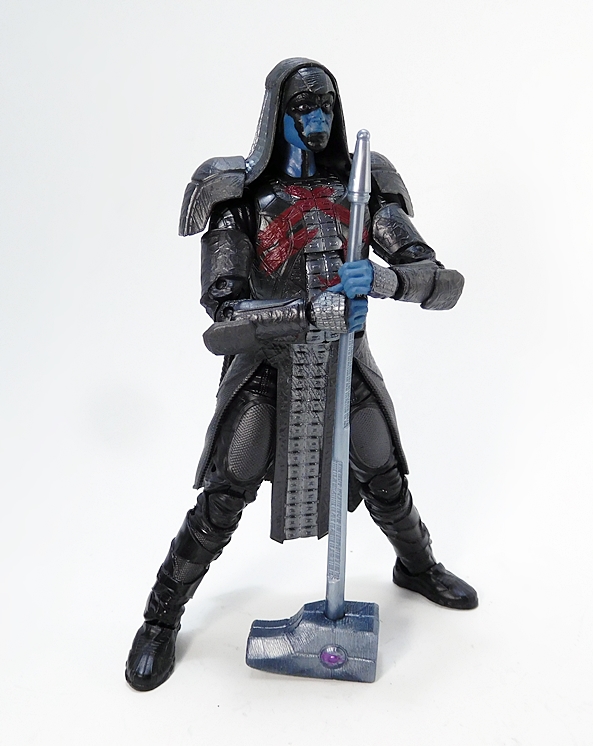 I was terribly excited to get this figure in hand and even as I was checking him out in the box, I thought he couldn’t be anything else but a slam-dunk. And if I just planned on posing him on my shelf standing with his hammer by his side, then I suppose he turned out pretty great. But the moment I got him in hand and started fiddling about with him, the pangs of disappointment began to build. The design choices here definitely favor display over play, and I suppose that’s fine for a lot of collectors out there, but I like to get a little more out of these little plastic people, and so this release left me a little cold. Hopefully I’ll have better luck next week, as I keep the First Ten Years train rolling along with a review of another of these new Marvel Studios releases.