It does my heart good to be coming back with a third review this week. It makes me even happier to relive the old days with a DC Friday review! I’ve been trying to cut down on the number of Gallery statues I buy from DST, because they were getting out of hand, but this past month, they’ve released a bunch that I simply could not resist. Today, I’m opening up one of those, and it is indeed… Supergirl! In case you’re unfamiliar, these are roughly 9-inch scale, budget-priced PVC statues, and DST churns out a lot of them! 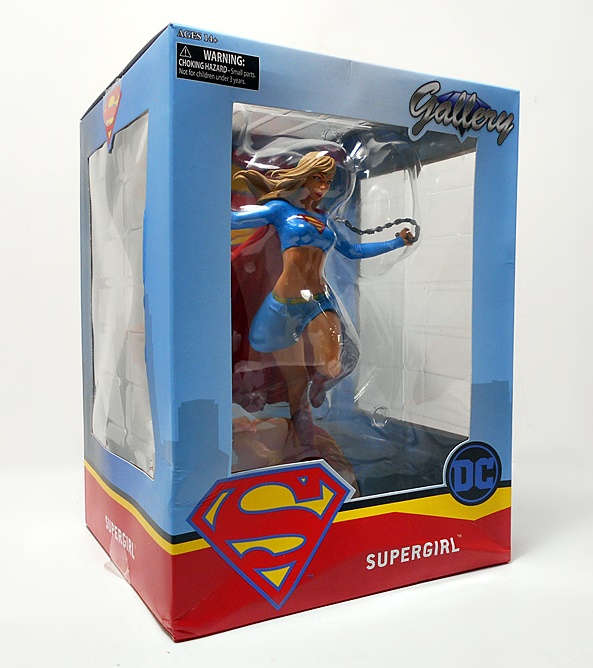 We’ve already seen Supergirl twice in the DC Gallery line, both of which were based off the animated Justice League Unlimited series, with one for regular release and one as an SDCC Exclusive. If you’ve been with me for the three dozen or so Gallery Statue reviews I’ve done here on FFZ, then you should be readily familiar with the packaging. These statues come in collector friendly window boxes, with windows on the front, top, and side panels. This particular box is a little larger than most of the Gallery statue boxes in order to incorporate the rather dynamic pose. The statue inside is nestled in a clear clamshell, letting you see what you’re getting from almost every angle. In this case, the box itself is nice and colorful, with some beautiful character art on the back (even if it doesn’t match the statue at all!) and her S-Shield printed on the back of the interior tray. All that is great because I am currently displaying these statues in their boxes. Let’s get Kara out of the box and check her out!

The statue comes out of the box all assembled and ready for display, and looking mighty fine! For the most part DST has been producing these statues with fairly static and reserved composition. That’s certainly not the case here, as Supergirl is seen bursting forth from a fiery explosion and ripping a chain in half. No doubt, an eeeevil chain! She has one leg drawn up at the knee with her other leg trailing down and touching the base. The pose shows off both her power and the grace of her curves beautifully. Straightaway, I’m going to say that this is one of my favorite poses this line has done, and it’s also one of the better poses I’ve seen on a Supergirl statue recently. It exhibits some great keneticism and excitement, and it just captures the character perfectly. 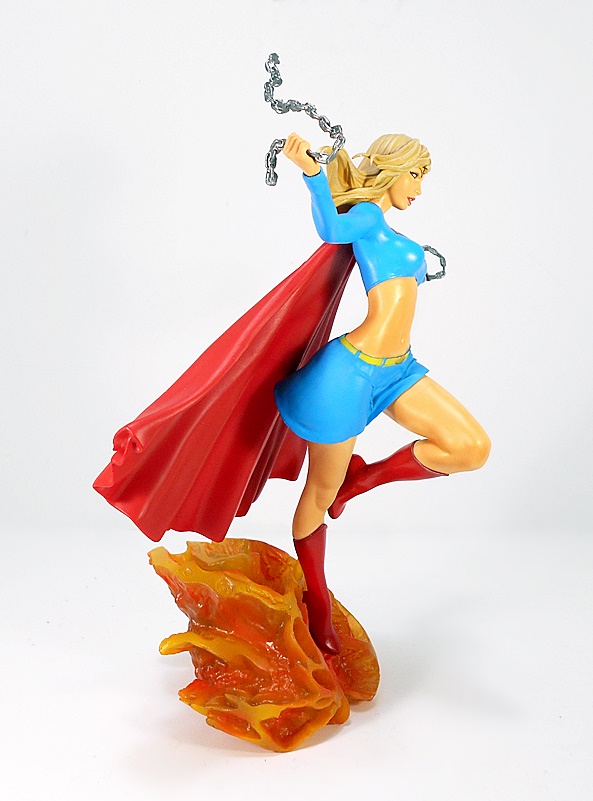 I’m also very fond of the costume style they chose here. She sports the blue long-sleeved crop-top and skirt, yellow belt, red boots, and the flowing red cape. As is routine for these statues, all of the details of the costume are incorporated into the sculpt, right down to some subtle wrinkles. This goes a long way to bring the costume to life and it often helps keep the paint in line too. And the coloring is also very much on point. The shades of red and blue go great together and include nice subtleties like a glossier finish on the boots and a matte finish on the cape. The S-Shields on both her chest and the back of her cape look nice and crisp. The skin tone is warm and even, but my one nit-pick would be that it’s a little too glossy for my taste. It’s not so bad under normal lighting, but my studio lights make her look like her skin is wet and glistening. Eh, maybe that’s not so bad. 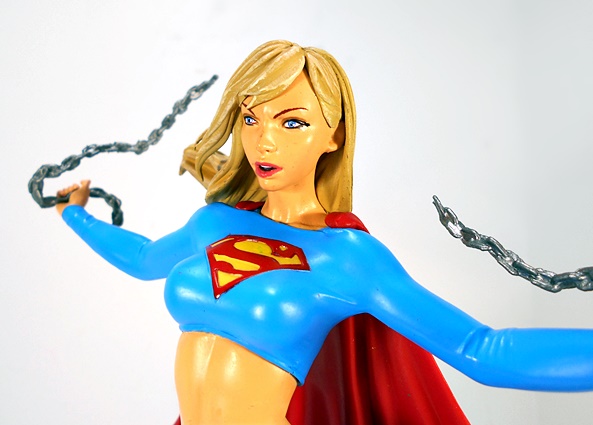 I was a little unsure of this portrait from the initial solicitation shots, but I think it turned out quite good in person. Indeed, I like it even more than DC Collectibles’ Cover Girl version of Supergirl, and that one is no slouch either. The paint on the eyes and lips are sharp, and I like how her mouth is slightly parted to show that it took the tiniest bit of effort to rip apart that chain. The hair sculpt isn’t terribly dynamic, but it does kick off to the side a bit to offer a little windblown look. I’m not sure this portrait is based on any particular art, but she’s pretty and I think it’s an overall  good look for Kara. 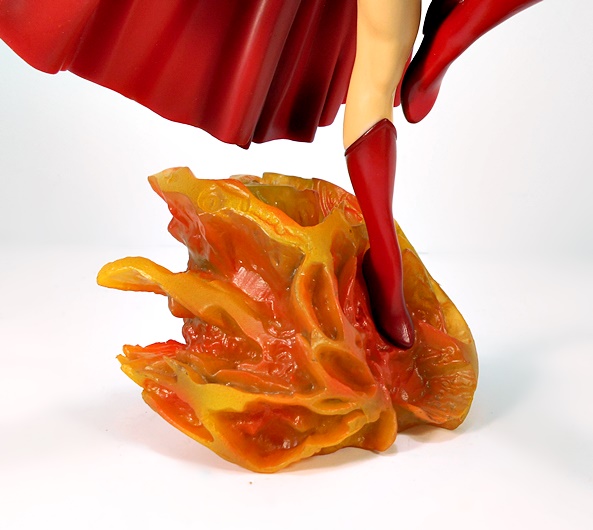 Bases have not always been the best thing about DST’s Gallery statues. It’s not that a lot of them are bad, but they’re just kind of there. That’s sort of the case here. Supergirl’s base is serviceable and lends itself well to the action pose. I’m not one hundred percent sure what it’s supposed to be, but I’m assuming it’s just a ball of fire from an explosion. I suppose it could just as easily be a fiery comet or something. Not knowing what it is doesn’t really compliment the sculpt that much, but I’m willing to accept it as an abstract construct. 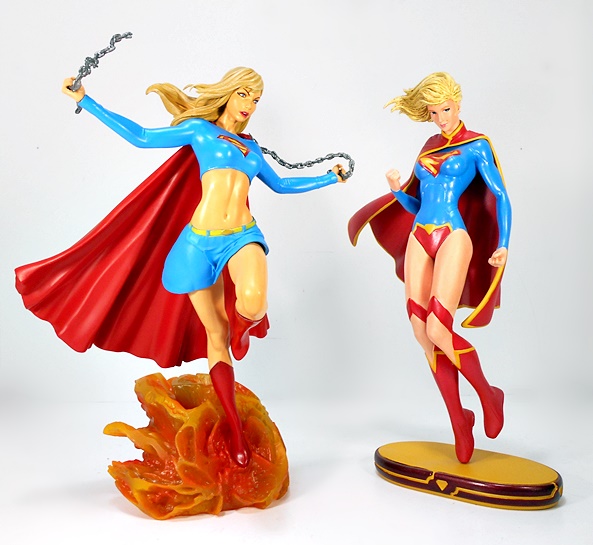 And before wrapping it up, I thought I’d toss in a shot of Gallery Supergirl alongside the previously mentioned Cover Girl Supergirl by DC Collectibles. Obviously, the costumes and styles are different, and this is a PVC statue as opposed to cold cast porcelain, but I think the Gallery statue holds up remarkably well against the competition. Plus, the PVC material is a lot more durable. 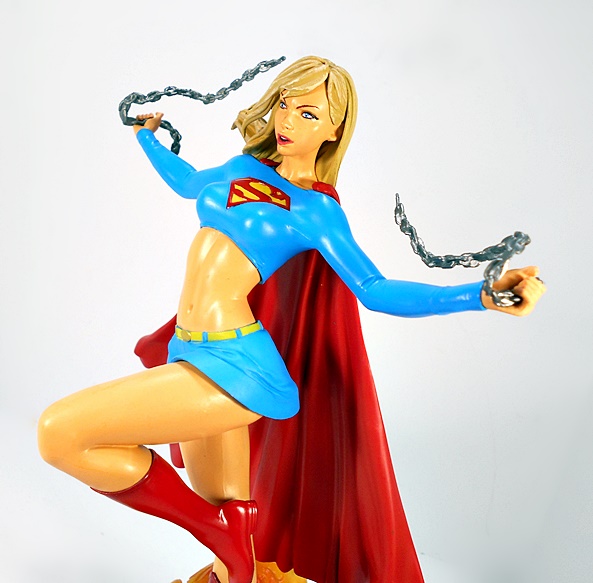 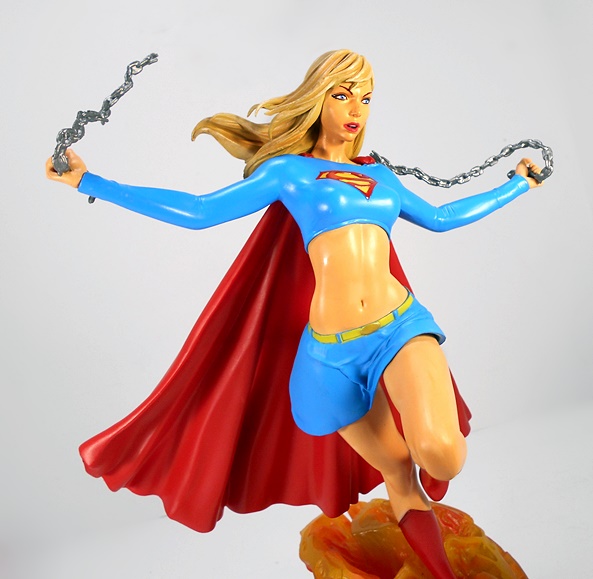 Once upon a time I used to call Kotobukiya’s Bishoujo line the best value in statue collecting. Well, two things have happened for me to revoke that praise. First, Koto has raised their prices a lot. Second, DST’s Gallery line has come along. And while the quality here isn’t on par with Koto’s, at around forty bucks, this is an extremely nice display piece for the money. A lot of thought went into the composition, the sculpt is excellent, and the paint only shows a few minor rough patches, which aren’t even worth it to me to complain about. As always, I would recommend buying these in person whenever possible, so you can scrutinize the paint you’re getting, but this one came to me in the mail, and I did just fine with what I got.