My apologies folks, but it was another week of stunted content. And I was doing so well for a while there! Well, these tough weeks are still going to crop up now and again. I had originally planned today’s review for Wednesday, but I didn’t get any time to work on it until Wednesday night, so I had to cut my losses and bump it to the end of the week. Hopefully next week I’ll be back to firing on all cylinders. But for now, let’s just get on with it… It’s been a few weeks since I checked back in with Mythic Legions, and if memory serves I was in the process of running through reviews of all the Goblins! Today we’ll look to the very top of these grubby little bastards with the Goblin King himself, No’Glin! We’ve seen the Advent of Decay packaging so many times by now, let’s just jump right in to the figure!

And doesn’t No’Glin look every bit the distinguished Goblin monarch? Hell, I can just smell the Napoleon Complex wafting off of this guy! He dons full plate armor from neck to toe, which is basically a bronze version of what we saw worn by the likes of Knubnik and Thwikk. The big difference here is the middle armor which features some more ornate pieces to protect his hips and little Goblin man-jewels. The optional pair of shoulder armor is the same sculpt worn by Knubnik, which has a roughly-hewn and jagged flavor that I think works great for these little buggers. The new coloring for the armor is fantastic, giving it a bit more regal flavor than that of his rank-and-file subjects, while still looking functional. A little wash helps to bring out the details in the sculpt, as well as the bits of wear and weathering. He also has some more copper colored bits in the arms and upper legs, and sculpted chainmail can be seen in the elbows and knees. I don’t think I’ll ever cease to be impressed with the way T4H’s sculpt and paint conspire to make these plastic armor suits look so realistic.

No’Glin comes with two tattered capes, one red and one black. Based on the promotional photos, I think these are supposed to be worn together, but I’m more keen on just giving him the red one. It’s visibly dirty and I think it reflects how difficult it is for No’Glin to look majestic when he basically lives in a hole in the ground. It’s got to be tough to keep clean in those tunnels! Besides, I may wind up giving the black cape to Snagg. He looks like he could use a cape.

The head sculpt is magnificent, and that’s been the case with all the Goblins so far. No’Glin features a broad and squat face with a slightly conceited grin and two beady yellow eyes that peer out from beneath his crown. The crown itself looks like it’s carved out of an old tree stump and features cuts in the side to allow his long pointed ears to jut out and a tiny animal skull positioned on the forehead. The woodgrain pattern sculpted into the crown is magnificent and I was initially convinced that the crown was a separate sculpt and could be removed, but it’s actually part of the head. It really does look that good! 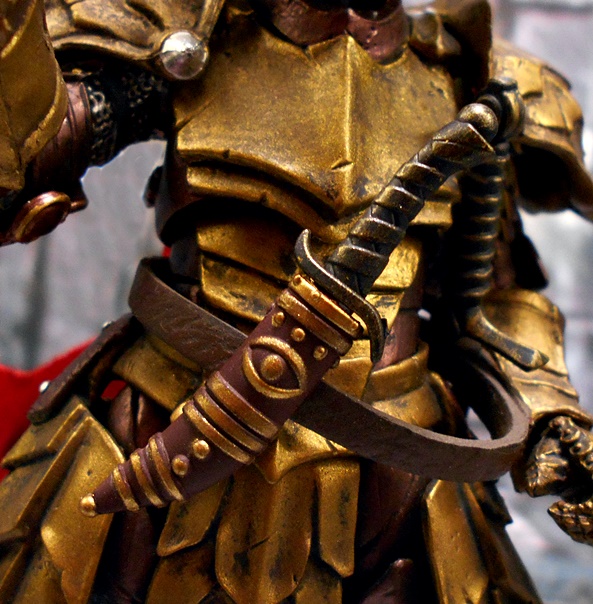 No’Glin comes equipped with a passel of different weapons, but the ones I chose to put on his belt are his standard broadsword and the hooked dagger and sheath that we first saw a while back with Lucretia the Vampire. The plastic sheath hooks onto the brown sword belt and has been repainted brown and bronze to match No’Glin’s armor. At first I thought this accessory would be a little too fancy for him, but it actually looks good on his belt. And being a king and all, he should probably have some bits of finery. The sword is one of the designs that we’ve been seeing since the original Kickstarter, with a straight guard and a simple disc pommel. The blade is silver and the hilt has a nice antiqued finish to it. By now, y’all should know I’m a big fan of this simple, serviceable, no-nonsense sword. 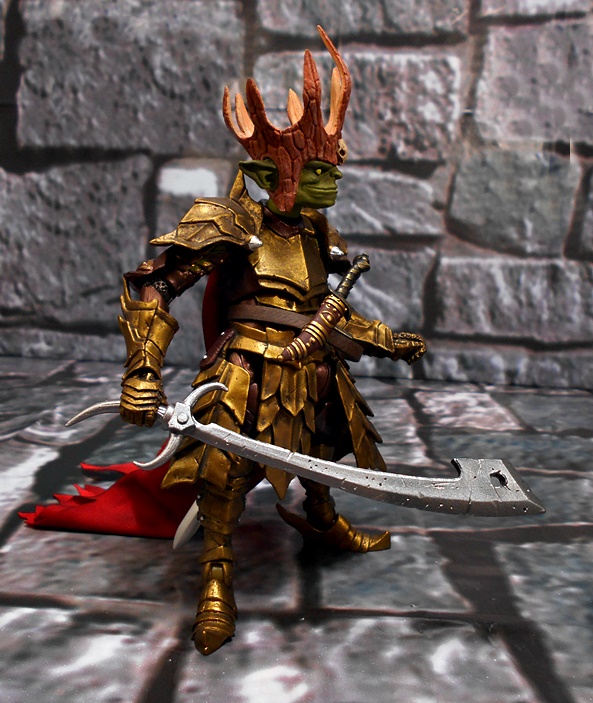 He also comes with two more exotic swords, one of which is a sickle-type blade we’ve seen before. In fact, we last saw its like equipped by one of his subjects, Thwikk. It has a silver painted blade and a simple hilt with gold fixtures and a blue grip. The design isn’t terribly Goblin-y to me, but the size is just right and it’s fancier than his regular sword. The other blade is an Orc sword, which I believe was introduced to us in Advent of Decay. There are no paint application on this piece, instead it’s cast all in silver. That feels like a bit of a cheap-out, but then again he does come with a lot of stuff. Again, there’s nothing new here, but since both of these weapons are newer additions to the Mythic Legions armory, so I’m happy to get them again. 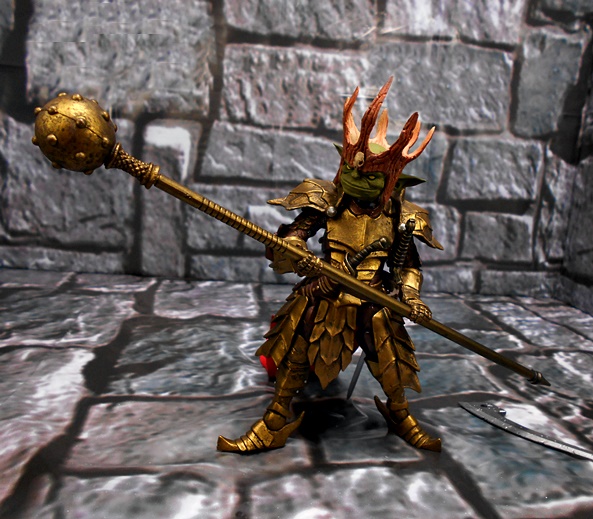 And since all kings need some kind of staff, No’Glin comes with a spiked mace head on a long shaft, painted in bronze to match his armor. I last encountered this weapon when I reviewed Faustia, although she was part of the assortment that came afterwards, so it’s only fair to point out that The Goblin King had it first. It’s a very long weapon, so much so that it looks kind of silly when No’Glin is holding it straight up with the butt resting on the ground. It would have been cool if T4H made this piece so you can take a part of the shaft out and shorten it. I’m just going to assume it’s an ornamental weapon because I just can’t see him swinging it with any force.

Even with so many of them already on my shelf, I can’t even put into words the high I get off of opening these figures. You simply can’t go wrong with Mythic Legions’ Goblins and that goes double for their King. Apart from the head, there’s virtually nothing new here, and yet T4H continues to prove themselves to be wizards at mixing and matching parts to come up with a figure that still feels fresh and new. And the new head sculpt is just packed with personality. No’Glin is going to look great ruling over my Goblin Horde and leading them against Mythoss’ forces of good. I only wish we had a little throne for him. Then again with how popular and lucrative Mythic Legions continues to be, I think anything is possible. I mean, if T4H have already begun producing horses, maybe a selection of thrones isn’t out of the question some time down the road. Come on, Horsemen, give us some thrones in the next Kickstarter!

2 comments on “Mythic Legions (Advent of Decay): King No’Glin by The Four Horsemen”