I probably don’t need rehash all the anger and frustration that came with making the first release of the Cobra Trooper in the Classified line a hard to get Target Exclusive. It was a bad move on Hasbro’s part, more so because at the time, I’m not sure anyone knew that the figure would get a variant widespread release in the near future. I was lucky enough to get one of those Cobra Troopers, and I was happy for it, but sure I wanted a couple more. OK, maybe a couple dozen more. Well, fast forward to now, and I was thankfully able to pre-order six of the new release of these bad boys. I have four in hand, and two more on the way, so let’s check this figure out by way of comparison to the Cobra Island version I reviewed a little while back.

The packaging looks as great as ever. Maybe I’ll keep one of their boxes, but with space being a premium around here, I probably won’t. 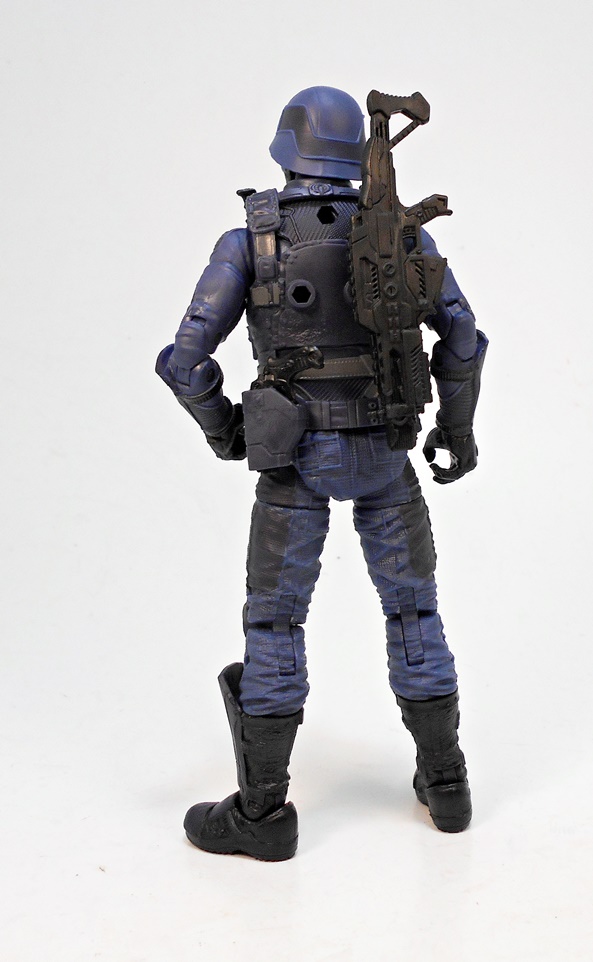 The figure is the exact same sculpt as the Cobra Island release, and I’ll reiterate here how awesome a sculpt it is! To me, this is a perfect imagining of the Cobra Trooper. It captures all the necessary beats of the classic uniform, but gives it a double injection of realism and hyper detail. You get texturing throughout the uniform, including some reinforced patches. There are armor plates on the shins, knees, and forearms, and some cool extra little touches like the sculpted Cobra emblems on the backs of the gloves. The uniform itself is about the same color as the Exclusive release, maybe just a touch paler blue. This fellow does have black painted pads on the outsides of his hips and upper legs, and some gray paint around the edges of his kneepads. 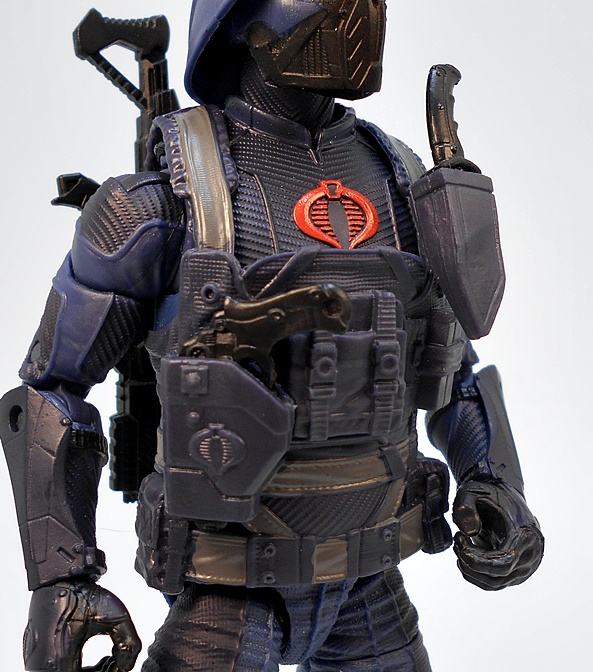 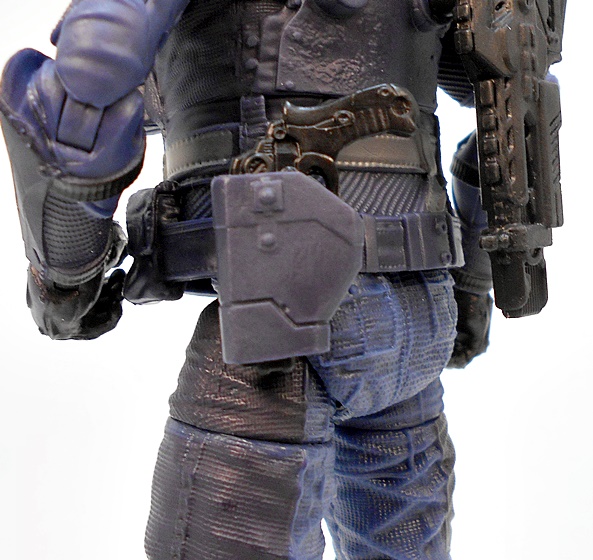 The figure is wearing the same tactical vest as the previous release as well, which encompasses the entire torso and includes the waist belt. This features sculpted straps and pouches, a working holster and sheath on the front, another working holster on the back, and some peg holes on the back to peg in extra gear. Finally, there’s a Cobra emblem embossed and painted on the chest. The only difference here comes in the coloring. It was previously black, now it’s pale blue with gray paint on the belts and straps. I think I prefer this deco on the vest, as it keeps faith with the original Cobra uniform deco just a bit more.

The head sculpt is also identical, with the only discernable difference being the skin color on the new figure being a little darker. The helmet is once again removable, and friction does a nice job of keeping it in place, even when I’m posing the figure. 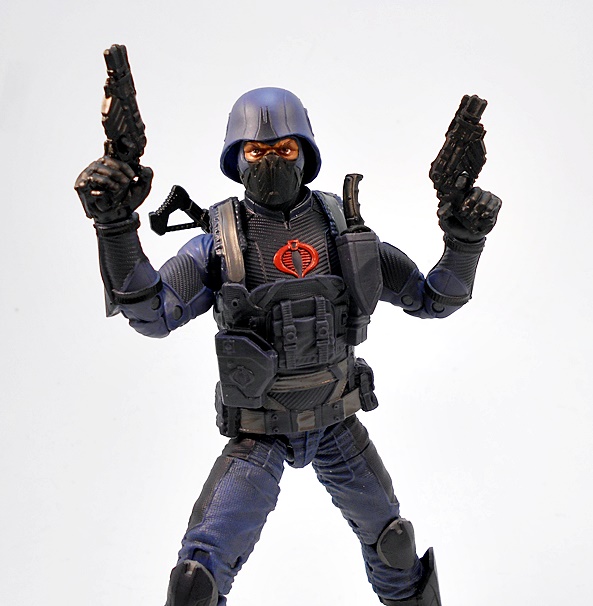 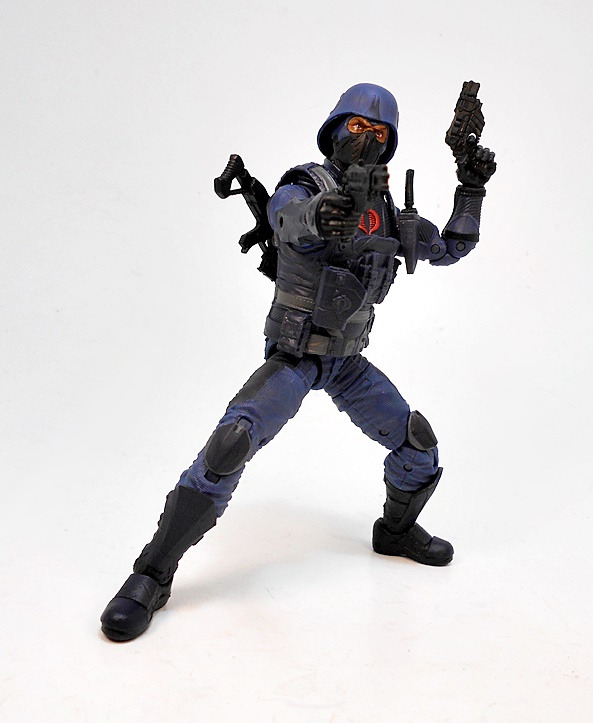 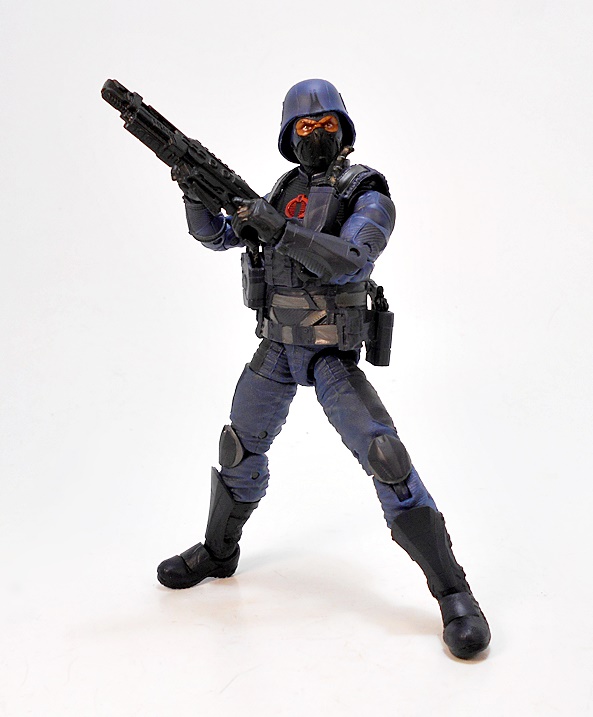 So what else is different? Only the omission of some gear. The new figure still comes with the knife, twin pistols and the sub-machine gun, but lacks the goggles, larger rifle and the arm-band. Yeah, it’s a shame the rifle couldn’t have been included, as I think the arm-band would have been enough to make the Cobra Island an exclusive, but it’s certainly not a deal breaker for me. 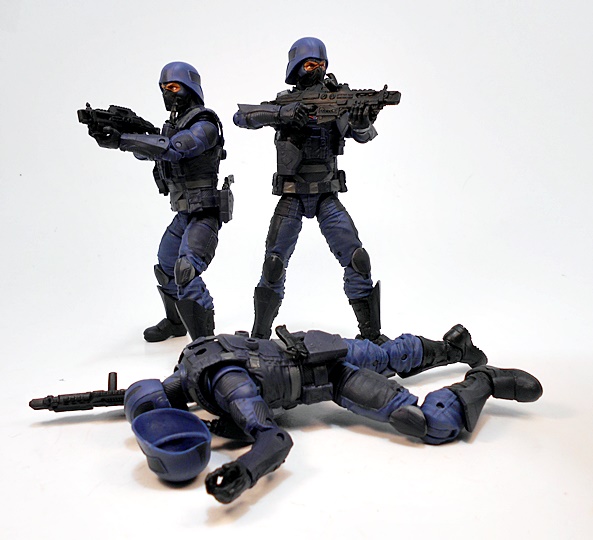 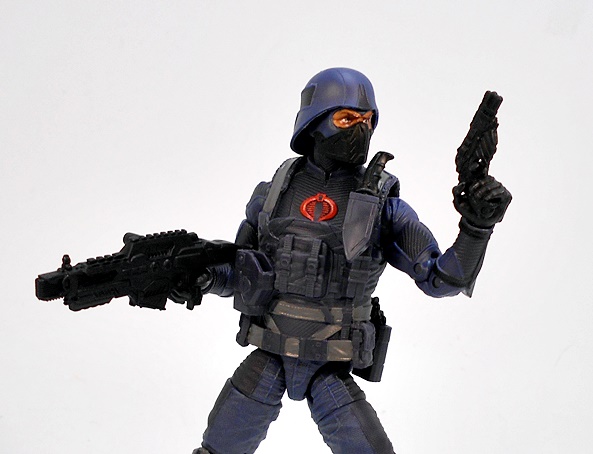 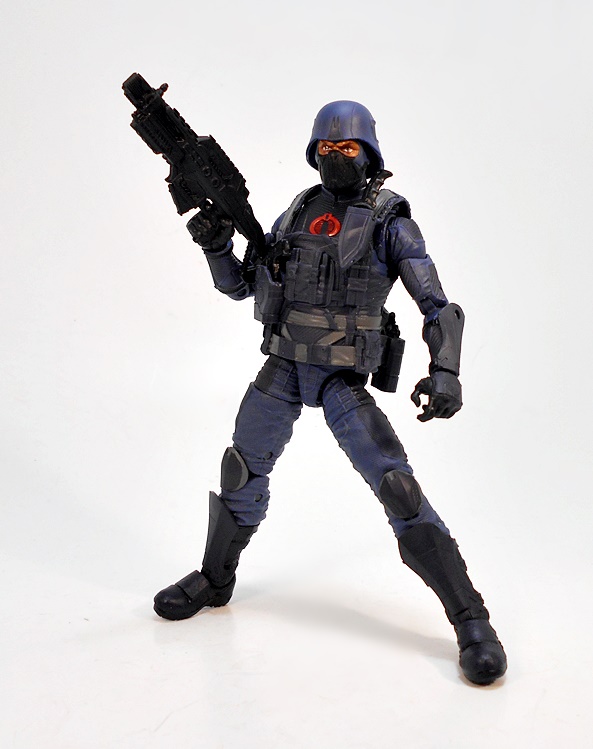 This is an absolutely amazing figure, and without a doubt my favorite iteration of the Cobra Trooper to date. I was strongly tempted to pay out the nose for two more of the Cobra Island Troopers, and now I’m so glad that I didn’t. I’m perfectly happy with my single figure, who’s arm band serves to identify him as the Commander of the rest of my troops. I’ll probably give his rifle to one of these new ones and make him a sharpshooter. What’s more, these seem to be pretty obtainable, with pre-orders still open at a number of online retailers. Alls well that ends well, I guess. But I think Hasbro could have saved themselves a lot of fan anger had they just labeled the Cobra Island version as an Officer and assured fans that the troops would be coming in wider release and better supply.